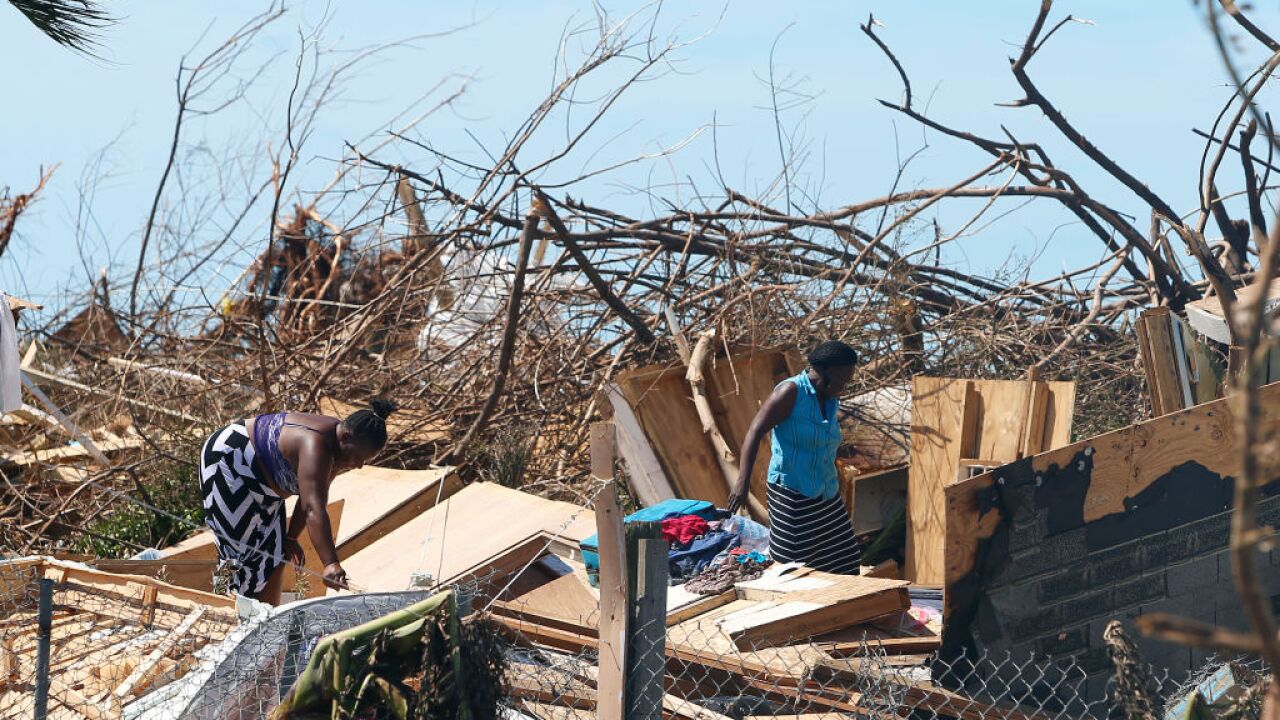 Damage from the Bahamas.

ABACO, Bahamas (AP) — Carrying possessions in plastic bags, some weary Bahamians whose homes were smashed by Hurricane Dorian waited Thursday for a flight out of the disaster zone as an international humanitarian effort to help the Caribbean country gained momentum. The death toll rose to 30.

A few hundred people gathered at the partly flooded Leonard M. Thompson airport on Abaco island in hopes of getting a seat on one of the small planes picking up the most vulnerable survivors, including the sick and the elderly. However, the evacuation was slow and there was frustration for some who said they had nowhere to go after the Category 5 hurricane tore through the area, shattering whole neighborhoods.

"They told us that the babies, the pregnant people and the elderly people were supposed to be first preference," said Lukya Thompson, a 23-year-old bartender. But many were still waiting, she said.

Despite hardship and uncertainty, those at the airport were mostly calm. The Bahamian health ministry said helicopters and boats were on the way to help people in affected areas, though warned of delays because of severe flooding and limited access.

At least 30 people died in the hurricane and the number could be "significantly higher," Bahamian health minister Duane Sands told The Associated Press in a telephone interview Thursday night. The victims are from Abaco and Grand Bahama islands and include some who had been injured and flown to New Providence island, he said.

The hurricane hit Abaco on Sunday and then hovered over Grand Bahama for a day and a half.

On Thursday, emergency officials fanned out across stricken areas to track down people who were missing or in distress. Crews began clearing streets and setting up aid distribution centers.

The United Nations announced the purchase of eight tons of ready-to-eat meals and said it will provide satellite communications equipment and airlift storage units, generators and prefab offices to set up logistics hubs. U.N. humanitarian chief Mark Lowcock said about 70,000 people "are in immediate need of life-saving assistance" on Grand Bahama and Abaco.

A British Royal Navy ship docked at Abaco and distributed supplies to hurricane survivors. On Grand Bahama, a Royal Caribbean cruise ship dropped off 10,000 meals, 10,000 bottles of water and more than 180 generators, as well as diapers and flashlights.

American Airlines said it flew a Boeing 737 from Miami to Nassau to drop off 14,000 pounds of relief supplies. The airline is also giving frequent-flyer points to customers who donate at least $25 to the Red Cross.

Some dazed survivors of Hurricane Dorian made their way back to a shantytown where they used to live, hoping to gather up some of their soggy belongings.

The community was known as The Mudd — or "Da Mudd," as it's often pronounced — and it was built by thousands of Haitian migrants over decades. It was razed in a matter of hours by Dorian, which reduced it to piles of splintered plywood and two-by-fours 4 and 5 feet deep, spread over an area equal to several football fields.

A helicopter buzzed overhead as people picked through the debris, avoiding a body that lay tangled underneath a tree branch next to twisted sheets of corrugated metal, its hands stretched toward the sky. It was one of at least nine bodies that people said they had seen in the area.

"Ain't nobody come to get them," said Cardot Ked, a 43-year-old carpenter from Haiti who has lived 25 years in Abaco. "If we could get to the next island, that's the best thing we can do."

Ked was one of thousands of desperate people seeking help in Dorian's aftermath. With winds of 185 mph (295 kph), the hurricane obliterated houses on the Bahamas' Abaco and Grand Bahama islands.

Crews in Grand Bahama worked to reopen the airport and used heavy equipment to pick up branches and palm fronds. Lines formed outside gas stations and grocery stores.

"People will be out of jobs for months," 67-year-old wood carver Gordon Higgs lamented. "They'll be homeless, no food. Nothing."

On Thursday, medical officials moved hundreds of people left homeless by the storm out of the main hospital in Abaco to shelters in schools and other government buildings. Some were angry at being asked to leave, or at not being allowed to freely enter to visit hurt relatives, and a shouting match erupted at the main door between a small group of hurricane victims and Bahamas marines.

Abaco and Grand Bahama islands are known for their marinas, golf courses and all-inclusive resorts and are home to many fishermen, laborers and hotel workers.

At the Leonard M. Thompson airport, Rashad Reckley, a 30-year-old saxophonist, played the Bob Marley song "Three Little Birds" for people who had lost their homes.

"I want to lift up everybody's spirits after all the tragedy that happened," said Reckley, who said he had exhausted his repertoire after playing for hours.

"They want me to play more," Reckley said. "But I can't think of songs to play."