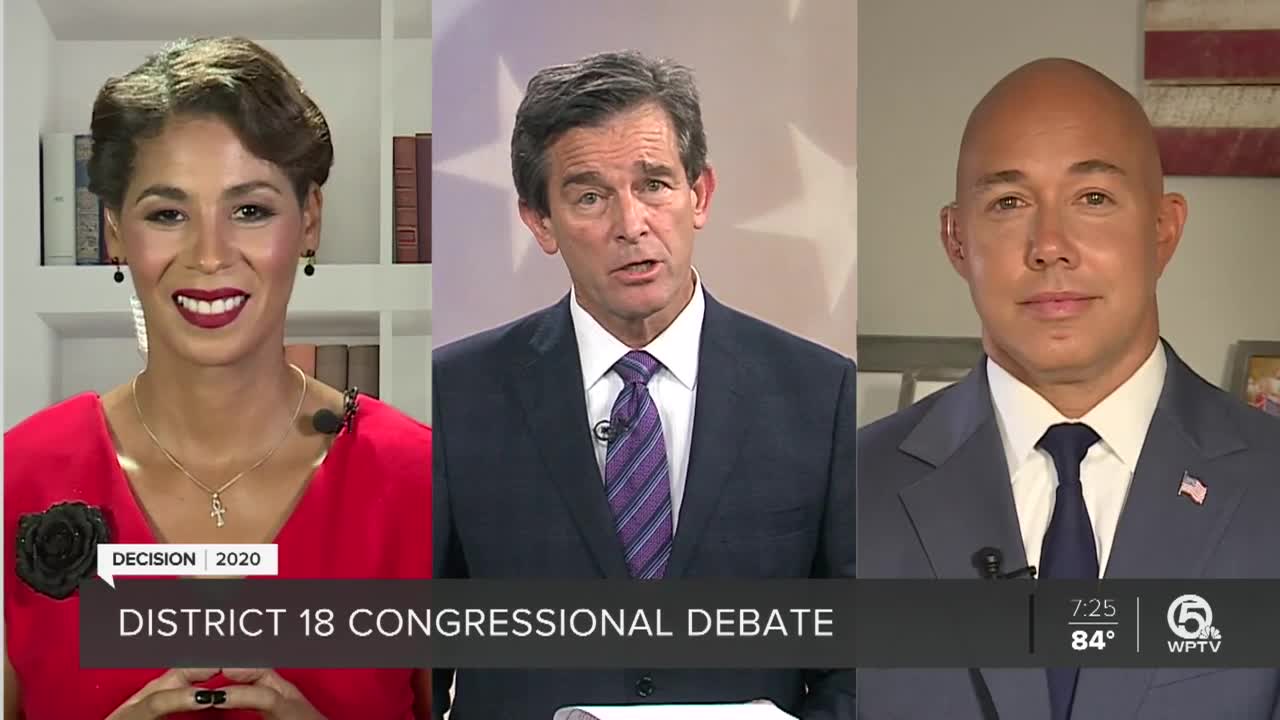 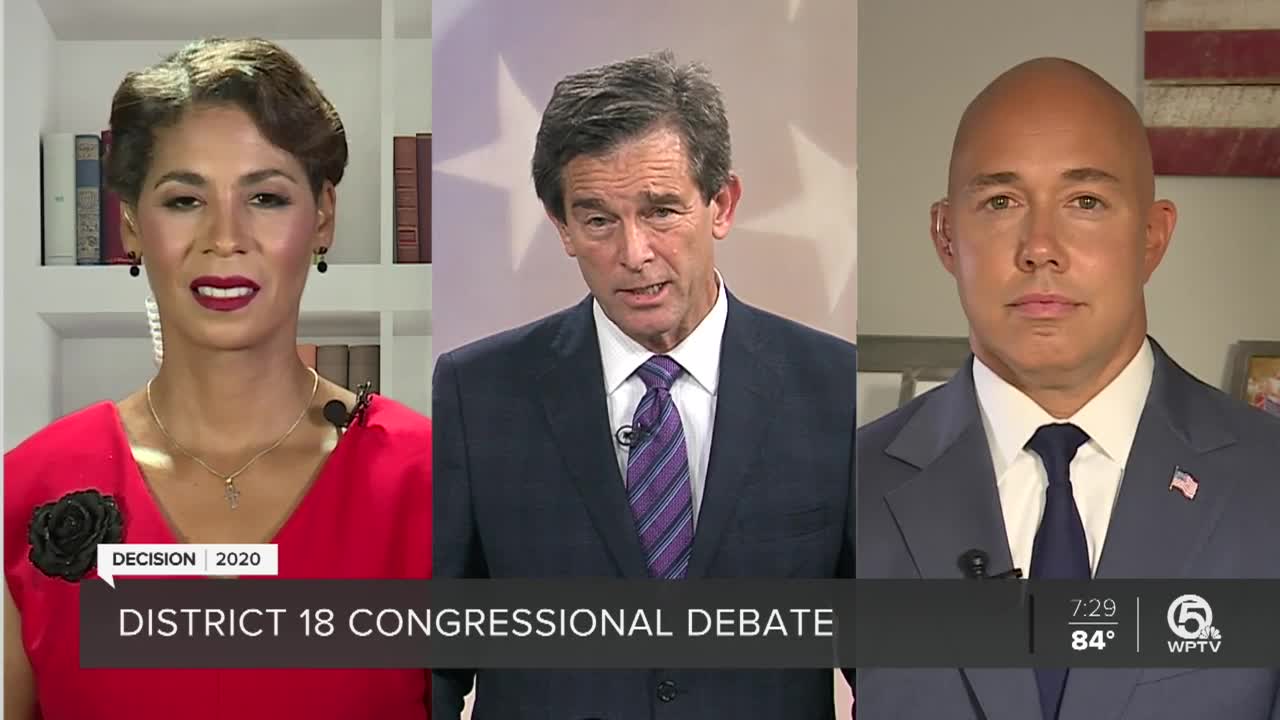 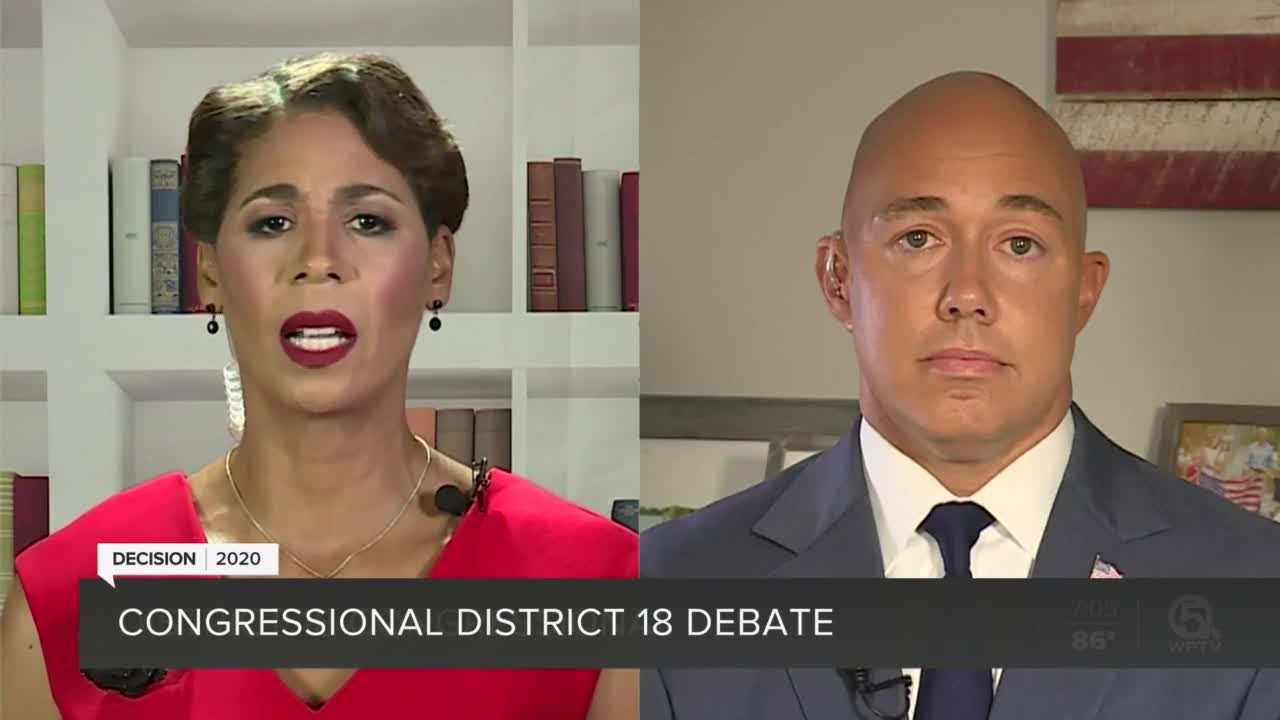 WPTV anchor and "To the Point" host Michael Williams moderated the debate.

The candidates discussed a variety of topics, including health care, the environment and coronavirus.

Mast, who represents the northern portion of Palm Beach County, as well as St. Lucie and Martin counties, recently made headlines after it was revealed that he joked about rape and referenced sex with 15-year-old girls in an old Facebook comment to a friend.

Watch part one of the debate below:

The U.S. Army veteran apologized for his "vile" and "disgusting" comments during an interview with Williams in August but resisted calls to resign and went on to say that he has "grown" since his days serving in the Army.

During Monday's debate, Mast once again apologized for the comments and said he has worked to become a better person.

"All I can do is apologize for anything stupid that I've ever said in my past," Mast said Monday.

Keith is also a veteran, having served in the U.S. Navy, has called Mast's comments "unacceptable and dishonorable."

Watch part two of the debate below:

On the issue of health care, Mast said he supports getting rid of the Affordable Care Act, saying it is too costly and offers less choice. Instead, he said he supports a plan with more choices.

Keith said she supports expanding the ACA to more choices and wants Medicare for all.

Mast contended that America's health care is a model for the rest of the world because of the choices that stimulate research for diseases like cancer.

Keith rebutted that statement, saying "no one" is coming to America for health care coverage because of the U.S. response to the coronavirus. She said she supports a nationwide mask mandate to help control the spread of COVID-19.

"(Democrats and I) worked together, bipartisanly, on four stimulus bills. One of them being the Cares Act that my opponent said she would be a hard 'no' on. The bill that had the Paycheck Protection Program and stimulus checks. The work that we've done on SNAP," Mast said.

Mast attacked Keith for not supporting the CARES Act, which helped businesses struggling during the pandemic.

Keith said she opposed the first CARES Act approved by Congress because it lacked sufficient funds to cover all of the American people's needs.

"The reason I opposed the First Cares Act is because it did way too little. People with good judgment knew that when millions of people would be out of work and likely losing their health coverage, at the same time, they needed more than just enough to put food on the table," Keith said.

Turning to the environment, each candidate said water quality issues on the Treasure Coast and Lake Okeechobee discharges are a topic of importance.

"What have we done well? Working hand in hand, Republicans and Democrats, and the president, we've gone out there, and we’ve authorized $250 million for South Florida ecosystem restoration projects. We've successfully changed the way that we manage Lake Okeechobee, preventing discharges this year so far," Mast said.

Keith said she could team up with other Democrats in Congress to vote to appropriate funds for the Comprehensive Everglades Restoration Plan.

"Get us back into real environmental stewardship. And actually fix these problems in a long term systemic way. This sort of, 'Oh, we just lowered the lake, and that fixed all the problems.' Our lake right now is at 15.75 feet. It is a biscuit from discharges happening right now,” Keith said.