'We should not have our political affiliations on there. That’s simply it,' said voter 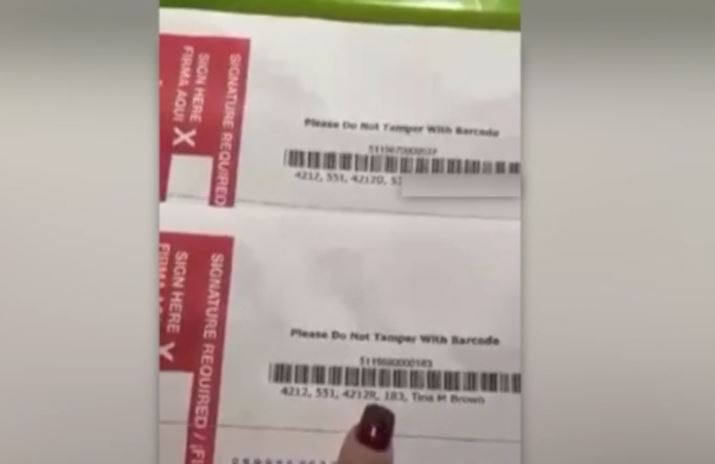 A Palm Beach County woman's Facebook post detailing mail-in ballot privacy concerns is getting a lot of attention. Her post has been viewed more than 100 thousand times and got a retweet from President Donald Trump.

WEST PALM BEACH, Fla. — A Palm Beach County woman's Facebook post detailing mail-in ballot privacy concerns is getting a lot of attention. Her post has been viewed more than 100 thousand times and got a retweet from President Donald Trump.

"This is crazy," Tina Brown said. "I've never had anything like this happen in my life."

Brown said she noticed her ballot could be identified from the mail-in envelope as either Republican or Democratic.

She said she and her brother, who lives at the same address, were filling out their ballots at home.

"He's a registered Democrat and I'm a registered Republican," Brown said. "So when we were doing our votes together, we were going to send it out together. It was going to be fun."

When she sealed the ballots, she noticed a series of numbers and a letter on the back near a bar code, labeling the envelope with either an "R" or a "D."

"They can see who my political affiliation is, and I don't like that," Brown said.

She said she posted the video to educate other voters.

"We should not have our political affiliations on there," Brown said.

She said her phone has been ringing off the hook since posting the video.

"Every single (call and email) has been positive, with the exception of about three, and we're talking about thousands," Brown said.

Vicki Davis, the Supervisor of Elections in Martin County, said she saw the video, too, and has received calls about it.

She said the labeling makes sure voters get their proper primary election ballot, specific to their party affiliation. Florida is a closed primary state.

Davis said fraud as a result of the labeling would be highly unlikely.

"I don't know that a postal worker would have time to go through ballots in their general workday and remove those ballots," Davis said.

Brown would like to see a new way of labeling ballots, without an "R" and a "D." Davis said there are no plans for changing the labels.

"This is not propaganda," she said. "It's just really, basically, just protecting the voter."

Davis also stressed that the "R" and "D" labeling is specific only to primary election ballots. Labeling of GEN, or something similar, is consistent on every ballot for the general election since ballots are the same regardless of party affiliation.

Palm Beach County's Supervisor of Elections posted the following statement in response to the video:

"Concerns have been raised by certain voters that having the party on the envelope leads to a possibility of postal employees tampering with or not delivering mail of voters of a particular party. It would be a federal crime for any post office employee to tamper with this process. We have received no such reports of anything like this happening. Florida is a "Closed Primary" state, meaning voters can only vote for members of their party in a partisan race in the primary election. Because of this, voters are mailed ballots according to their party affiliation. For the General Election in November, voters can vote for candidates of any party, so there is only one ballot style in each precinct. Accordingly, there will be no indication on the ballot envelope as to the party of the voter."