Is state flag tied to Confederacy or 'not a flag of surrender?' 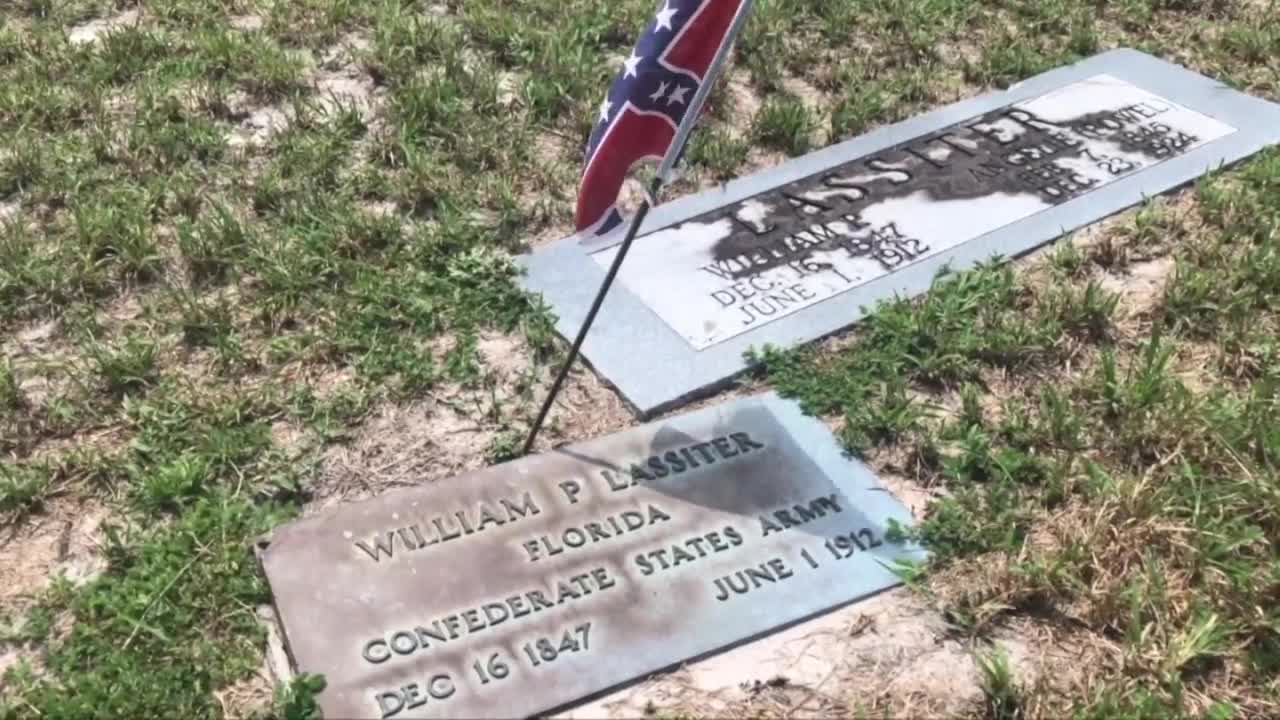 Is Florida's state flag tied to the Confederacy? Jon Shainman explains the evolution of the flag's complicated history.

FORT PIERCE, Fla. — Since the death of George Floyd, the Southern Poverty Law Center said 50 Confederate monuments have either been removed, relocated or renamed in this country.

Florida has a fair share of monuments and symbols that are now back in the spotlight.

From a cemetery hilltop in Fort Pierce, you can find a handful of Confederate flags at the grave sites of those who fought for the confederacy.

They sit undisturbed. But in Fort Myers, a Robert E. Lee bust was vandalized, in Baker County, lawyers are demanding a courthouse mural with three hooded Klansman be removed, and in St. Augustine, the Civil War sparks fierce debate.

Descendants of those represented on the obelisk are suing the city, saying it cannot be safely moved.

In the Palm Beaches and on the Treasure Coast, there aren't the Confederate memorials you see in other parts of the state.

However, there is a symbol that flies above that also at times has been the source of controversy.

Dr. James Clark, an author and history professor at the University of Central Florida, said Florida had the first flag in North America. Back in the early 1500s, the Spanish flag was first raised over one of her territories.

It had a simple red cross on it. Back in the union after the Civil War, later versions of the state flag included the phrase "Let us alone", and a simple white flag with the state seal.

"Some people believe that the big 'X' is borrowed from the Confederate flag, which, of course, Florida was a part of," Clark said. "Others believe it comes from our Spanish heritage of 300 years."

"The motivating factor, I believe, was not to honor the Confederacy, but to make it look like not a flag of surrender," he added.

While Mississippi just voted for a new state flag, Clark doesn't see the appetite for it here, even though a rewrite of the state's Constitution in the 1960s allows for it.

"Until I went to Tallahassee, I never paid much attention the cross," Lee said.

Lee said there was very little discussion during his time in office about the flag.

What did gain his attention was an effort not to remove monuments of the past, but to add one.

"And we will see a slavery memorial on the grounds of the Capital," Lee said.

Approved in 2018, Lee's last year in Tallahassee, $400,000 in funding was approved toward its construction this past session.

"We felt it was only the right thing to do to recognize those people who helped build this state and build that Capitol and recognize them," Lee added.

What about Lee's take on the renewed attention to Florida's sometimes checkered past?

"I pray for the day that we will truly live up to the true nation of the Constitution, and that is, we are one nation under God," he said.