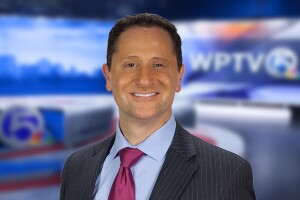 Glenn Glazer loves South Florida. His grandparents lived in Vero Beach for the first five years of his life, and Boca Raton to the present day. Glenn spent his school years visiting them every chance he got.

After graduating from the University of Maryland, Glenn moved to South Florida permanently in the early 1990’s. He then continued his, already established, broadcasting career as a DJ at several local radio stations, as well as being an editor here at WPTV.

Glenn spent a large majority of his time in the Storm Team 5 Weather Center (especially during hurricane season), being mentored by Kent Ehrhardt, Steve Weagle, and Dean Tendrich.

From the dust storms, snow storms, and tornadoes of the Lone Star State, to the coverage of hurricanes like Katrina, Rita, and Emily along the Gulf Coast, Glenn’s experience runs the gamut of weather phenomenon.

Needless to say when the opportunity arose for Glenn to return home to South Florida, and work at WPTV, it was an easily made decision.

He dragged his girlfriend at the time, now his wife, along with him back to the Sunshine State, and recently the two had their first child.

Glenn’s family is scattered from Boston, Massachusetts to Miami, Florida. They are thrilled to have him home on the East Coast.

Glenn has worked for years with organizations like the Make-A-Wish Foundation, Goodwill, Red Cross, and numerous Animal Rescue Organizations.