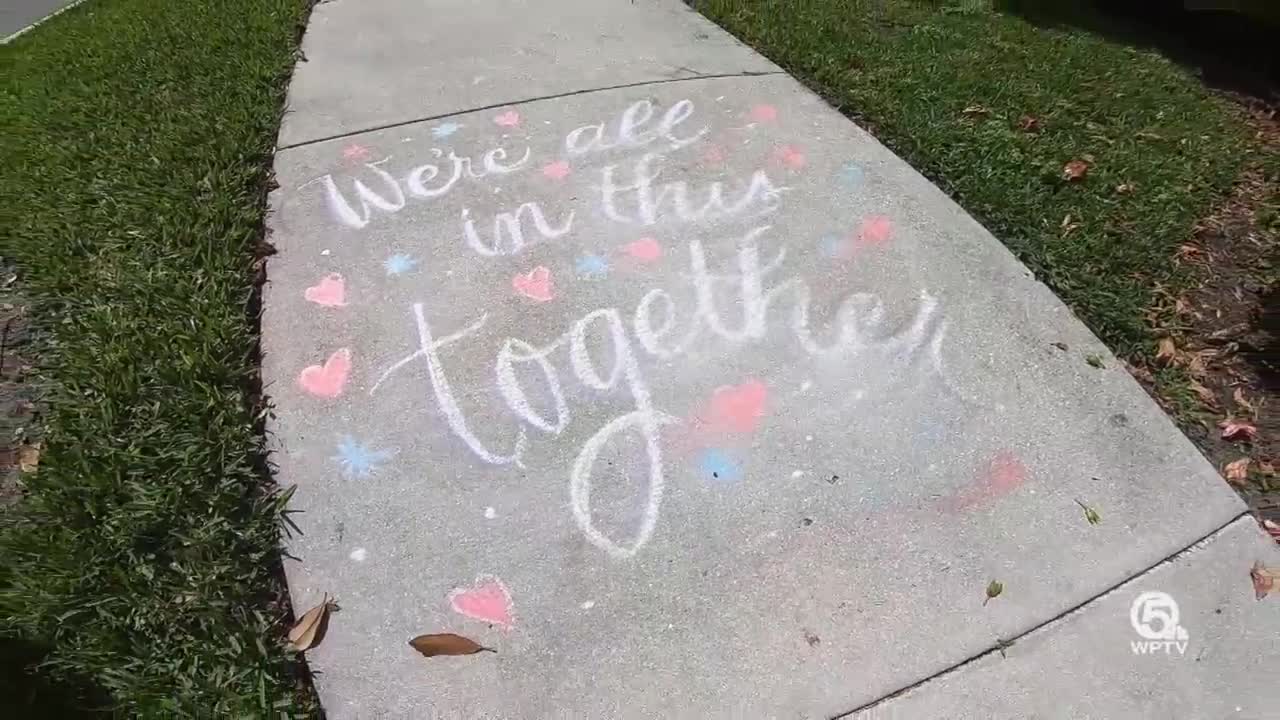 Many are staying at home because the coronavirus threat has forced the closure of restaurants, shops, and venues. Children in the New Haven neighborhood in Jupiter's Abacoa are keeping busy by drawing messages on sidewalks of kindness and inspiration. 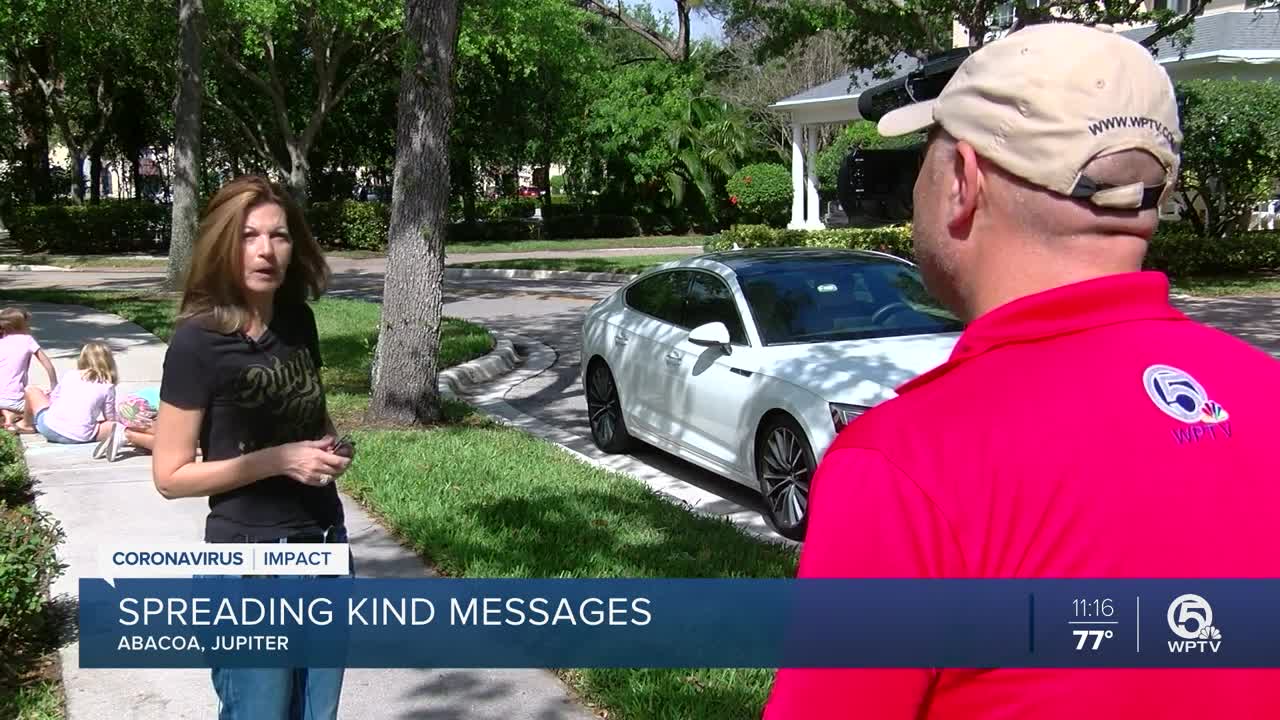 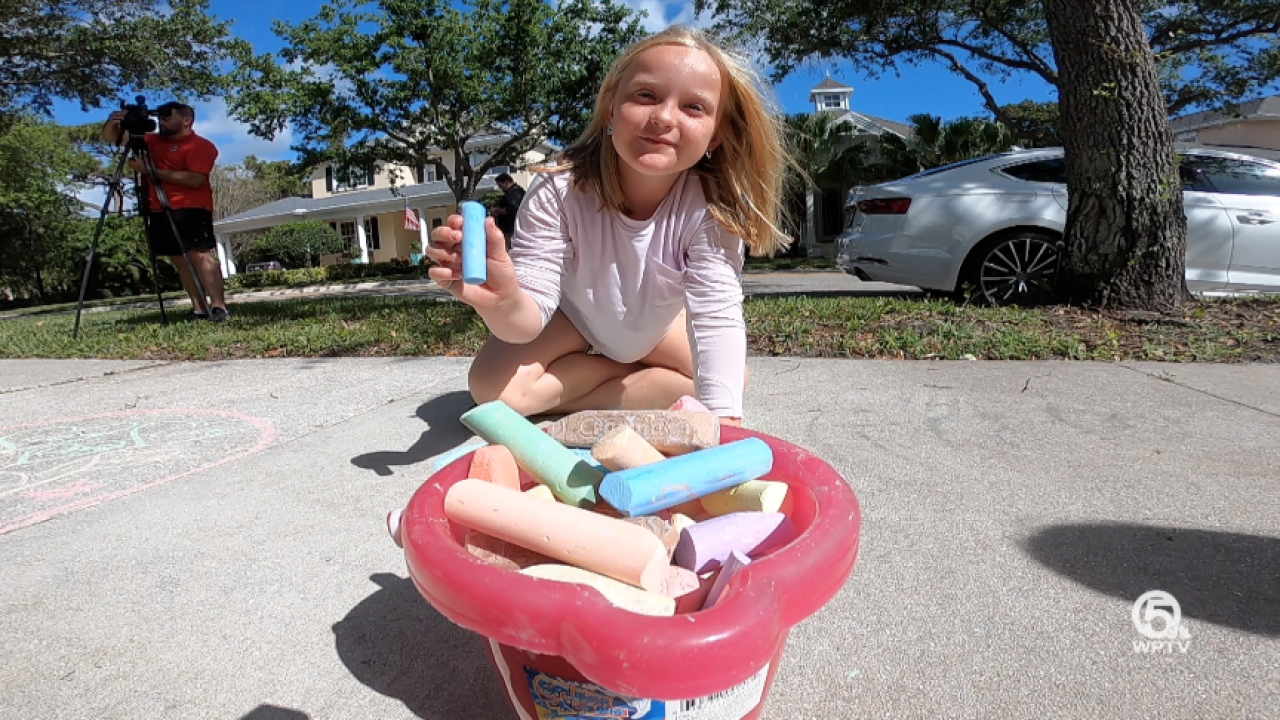 JUPITER, Fla. — Many are staying at home because the coronavirus threat has forced the closure of restaurants, shops, and venues. Children in the New Haven neighborhood in Jupiter's Abacoa are keeping busy by drawing messages on sidewalks of kindness and inspiration.

"Everybody wanted to send out positive vibes and positive thoughts. So the kids all around the neighborhood are doing it today," said Abacoa resident Robin Beers.

Twins Maddie and Marley and their friend Madyson are on a mission with chalk as their medium and concrete as their canvas.

"Because it's kind. I just like to draw hearts and nice things," said Maddie.

Their mission is to be compassionate to their neighbors.

“I hope they think that it's nice and kind," said Marley.

Beers said a neighborhood Facebook group got the idea when she posted a picture.

"We'll all get through this together, and that's while I was running, and I stopped, and I thought, that's really cool!" said Beers.

Beers said, "It is hard for the parents to keep them occupied and kind of away from each other. But yet, they want to play, they want to be outside, they want to ride their bikes, they want to do things, it is difficult. So having something like this for them to do is great."

Stacey Podell, a calligrapher who lives in the same neighborhood, unknowingly started the social media trend.

"I see that the sprinklers have washed it away a little bit, so I figure I'll find a new space, and I'll put another message every few days... and someone walks by, and it cheers them up, then that's great. I've done my job," said Podell.

When WPTV NewsChannel 5 talked to her, she was unaware she had inspired so many.

"I'll walk around and look for those! That's wonderful!" said Podell.

"We're just here to support each other and uplift and be positive during these trying times," said Beer.

"I'm drawing a colorful heart with colorful confetti around it," said Marley.

We asked Madyson what she was drawing, "[The word] Love.”

When asked why she chose to write love she responded, “Because I want everybody to be kind."