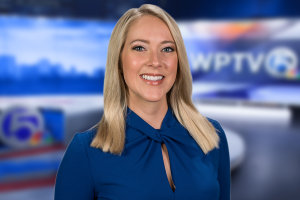 Jillian Idle joined WPTV in April 2018 as a Multimedia Journalist. She grew up in North Palm Beach, went to Palm Beach Gardens High School for the TV and Film magnet program and was a news intern at WPTV in the summer of 2013.

She most recently worked as a MMJ, traffic reporter and fill-in anchor at our sister station, WFTX-FOX 4 in Fort Myers. Some of the big stories she covered while there include Hurricane Irma, Hurricane Matthew and rallies for then presidential candidate Donald Trump, and Hillary Clinton’s running mate Tim Kaine.

Before that, she worked at ABC 7 Amarillo as a morning reporter and fill-in anchor. While in Texas she often wore cowboy boots to work and learned when to appropriately say “bless your heart.”

She graduated from Arizona State University with a Bachelor of Arts from the Walter Cronkite School of Journalism and Mass Communication with a minor in criminal justice.

Before graduation, Jillian spent the last semester of college reporting in the school’s Washington, D.C. bureau. There she was given the opportunity to report inside the House Chamber during the 2014 State of the Union Address and interview Arizona congressmen and Senator John McCain about immigration and the "Gang of 8" bill.

Jillian’s passion for news began at an early age. Thanks to 2 older brothers, she had a plethora of things to report on at home. She also anchored her middle school announcements, and in high school time coded tapes at the city of West Palm Beach’s news channel.

After 8 years away from the Palm Beaches Jillian is happy to be back home in South Florida close to family, friends and the place where she loves going to the beach, working out and playing golf.