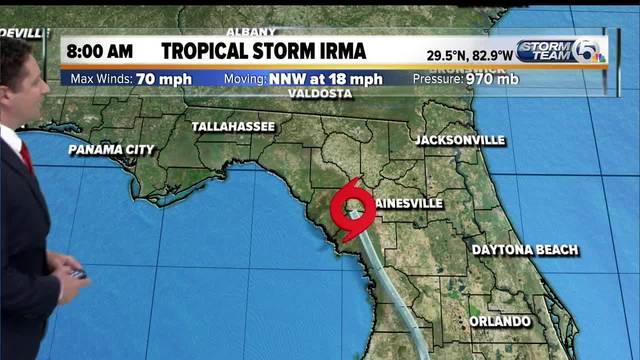 At 8 a.m. Monday, Irma has been downgraded to a tropical storm but still producing some hurricane force gust winds. 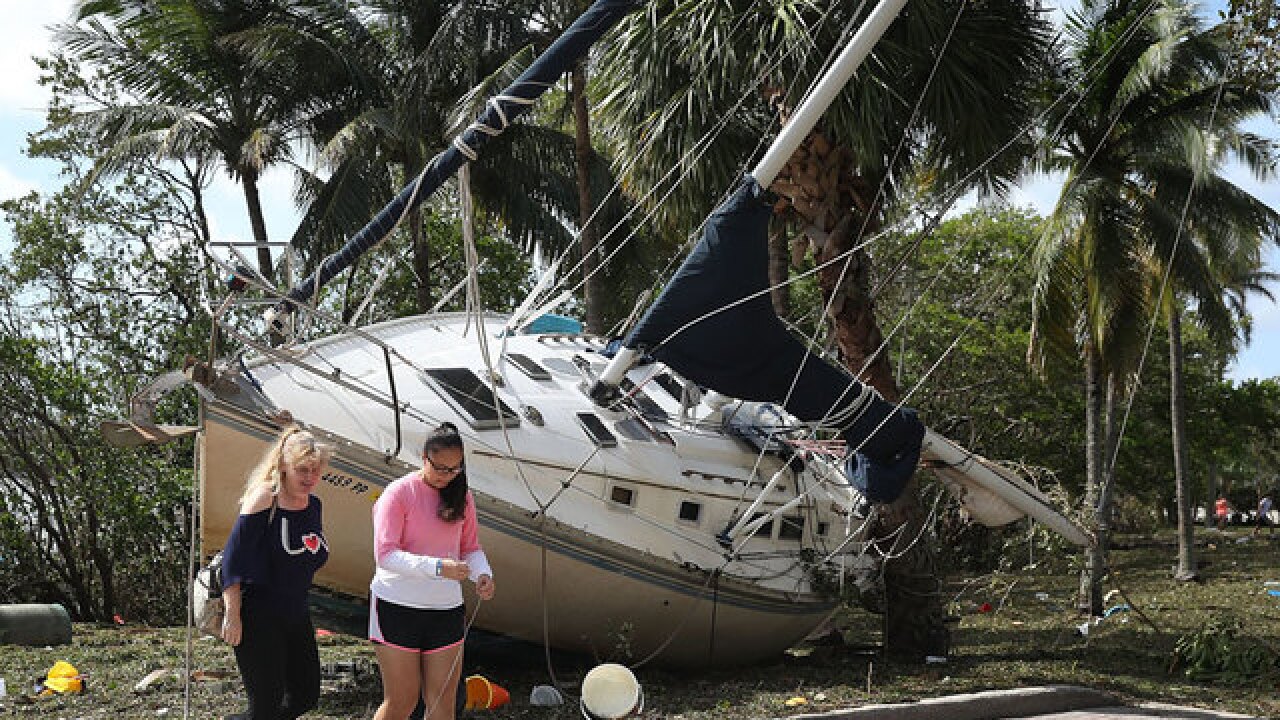 MIAMI (AP) — A weakened Irma spread misery around the Southeast on Monday, triggering coastal flooding in parts of Georgia and South Carolina while dumping heavy rains around the region. Meanwhile, authorities have sent an aircraft carrier and other Navy ships to Florida to assist in search-and-rescue operations amid reports of devastation in the hurricane-battered Keys.

The huge storm system is dumping heavy rain on parts of Georgia, South Carolina, North Carolina, Alabama and Tennessee. The former Category 5 hurricane had top sustained winds of 50 mph (85 kph) on Monday, and its ever-weakening core was slogging deeper into the Southeast. The once-fearsome eye was located at 5 p.m. EDT Monday about 10 miles (15 kilometers) east of Albany, Georgia. Forecasters expect Irma to become a tropical depression on Tuesday.

Irma wreaked havoc in the Florida Keys and along the entire length of the Florida peninsula. It flooded streets and coastal areas, swamped homes, uprooted massive trees, cast boats ashore, snapped power lines and toppled construction cranes. In a parting shot at Florida, Irma triggered severe flooding Monday in the state's northeast city of Jacksonville and the central city of Orlando. Rains and storm surge also flooded coastal areas in Georgia and South Carolina. Florida Gov. Rick Scott flew over the hard-hit but isolated Keys on Monday and said he saw "devastation" that included boats washed ashore and mobile homes pummeled by the storm. "It's horrible, what we saw," Scott said. All around the region, more than 7 million homes and businesses lost power at one point during Irma's passage, the brunt of the outages in Florida.

One death in Florida, of a man killed in an auto accident during the storm, has been blamed on Irma, along with another death in Georgia. At least 36 people were killed in the Caribbean as the storm closed in on the U.S. mainland.

WHAT'S HAPPENING IN THE FLORIDA KEYS? The Navy is sending an aircraft carrier to Key West to provide emergency services. An update from Monroe County describes "an astounding recovery effort" taking place in the Florida Keys , where there was no water, power or cellphone service after the storm. The USS Lincoln aircraft carrier will be anchored off Key West to provide emergency services, and three other Navy vessels are en route. Officials said the National Guard has arrived in the island chain, and state transportation officials have cleared six of 42 bridges as safe for travel. However, roads remain closed because of debris.

Big airports in Florida remain closed, and flight cancellations are spreading along the track of Tropical Storm Irma outside Florida. More than 3,800 U.S. flights scheduled for Monday were canceled by late morning — and more than 9,000 since Saturday — according to tracking service FlightAware. Delta Air Lines is scrapping 900 flights Monday, including many at its Atlanta hub. American Airlines said it won't resume flights in Miami until at least Tuesday while canceling 300 flights in Charlotte, North Carolina, due to wind.

SOCIAL MEDIA TO THE RESCUE

Worried relatives, generous volunteers and frantic neighbors turned to social media after Hurricane Irma wiped out electricity and cell service to many communities around Florida, cutting off most contact with remote islands in the Keys. Facebook groups were forming Monday to help from afar. Evacuees Of The Keys shared school closure notices, videos of destruction, and many posts from friends and relatives searching for loved ones. "We all sort of scattered around the country when we evacuated, so we're trying to stay in touch," said Suzanne Trottier, who left her Key West, Florida, home for Virginia almost a week ago ahead of Irma.