Warehouse home to over a million illegal wildlife items.mp4 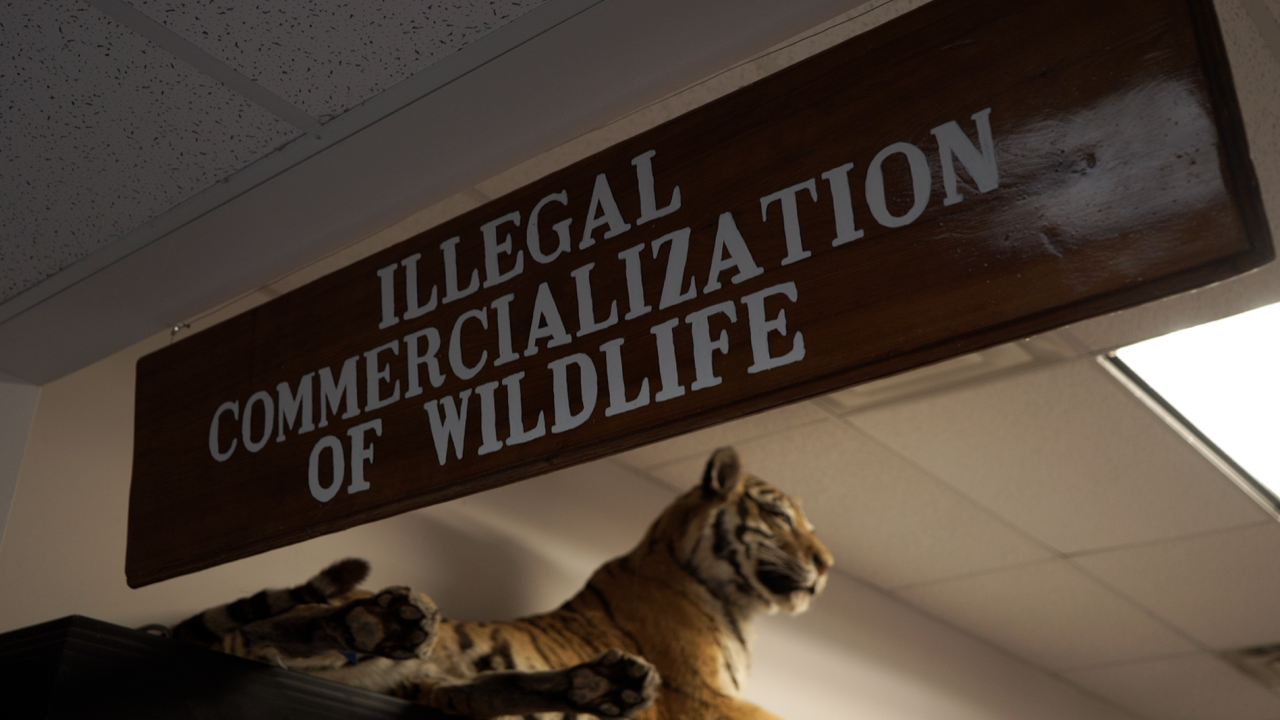 From the outside, the repository looks like a regular warehouse. But inside, the 8,000 square foot space is home to more than a million items all made from animal products.

“We now have a collection of 1.2 million items,” Sarah Metzer said.

It’s a massive wildlife collection, with everything from elephant trunk lamps, to entire lions and python boots, all organized on shelves.

“Fashion items that we adorn ourselves with, the home decor, the artwork,” Metzer described.

Sarah Metzer is the Education Specialist at the National Wildlife Property Repository. This space is now home to items that were once part of the illegal wildlife trade and confiscated by law enforcement both within the U.S. and from the country’s ports of entry.

“What we’re collecting here are the specimens either seized or confiscated from ports of entry to the United States,” Metzer said. Her job is to educate people about this one-of-a-kind collection. “If they are in some violation of one of our federal wildlife laws, they have the potential to end up here.”

The illegal wildlife trade involves the unlawful harvest or trade of animals, plants, or any products made from them, according to U.S. Fish and Wildlife. During 2019, USFWS inspectors processed 191,492 declared shipments of wildlife and wildlife products worth more than $4.3 billion. The busiest ports being New York, NY and Los Angeles, CA.

The repository was created in 1995 in Colorado to house a good portion of the items that were made illegally and confiscated. In 2019, the department gave out $7.7 million in criminal fines.

However, not all items made from animals end up on these shelves, as long as the animals are captured without breaking rules.

“Poaching is considered the illegal take of any fish or wildlife and the laws that regulate them,” Jason Clay with Colorado Parks & Wildlife said. “Today we’re doing one of our winter surveys on the Rocky Mountain bighorn sheep.”

These surveys help them monitor the population. “And they’re also used to help us set our hunting license numbers,” he said. “Hunting is our number one tool for managing our wildlife and the populations.”

As long as you have a license, hunting and what you do with your kill is legal. But if you’re just buying animal products, it may be hard to spot what’s legal and what’s not.

“We have to make sure everything is correct and nothing is illegal,” Andreas Tsagas said. Andreas has owned his fur and leather shop for over two decades.

“Most fur I have I buy from Europe,” he explained. He said he checks for tags that show what animal the fur came from, and where. “The people for wildlife check every coat.”

He said if something killed illegally comes through an American port of entry, law enforcement takes it. “I like to be in business,” he said. “I make sure 100 percent everything is the way it needs to be.”

“What is coming in, what is being trafficked, and what species are being represented,” Metzer said. “We do want to have a small slice of that so we can have that snapshot of what we see.”

These furs and statues now serve a larger purpose, after spending some time in the warehouse.

”For these materials they have the opportunity to have a second purpose,” she said. “Besides just being a former seized item, they’re going out to places like museums and science centers.”

Education institutions can request certain items from the repository for educational purposes.

“We know that it has served hundreds of different organizations in fulfilling their own conservation and environmental education missions,” Metzer said.