Michael Phelps wins Olympic gold medals No. 20 and 21 in Rio 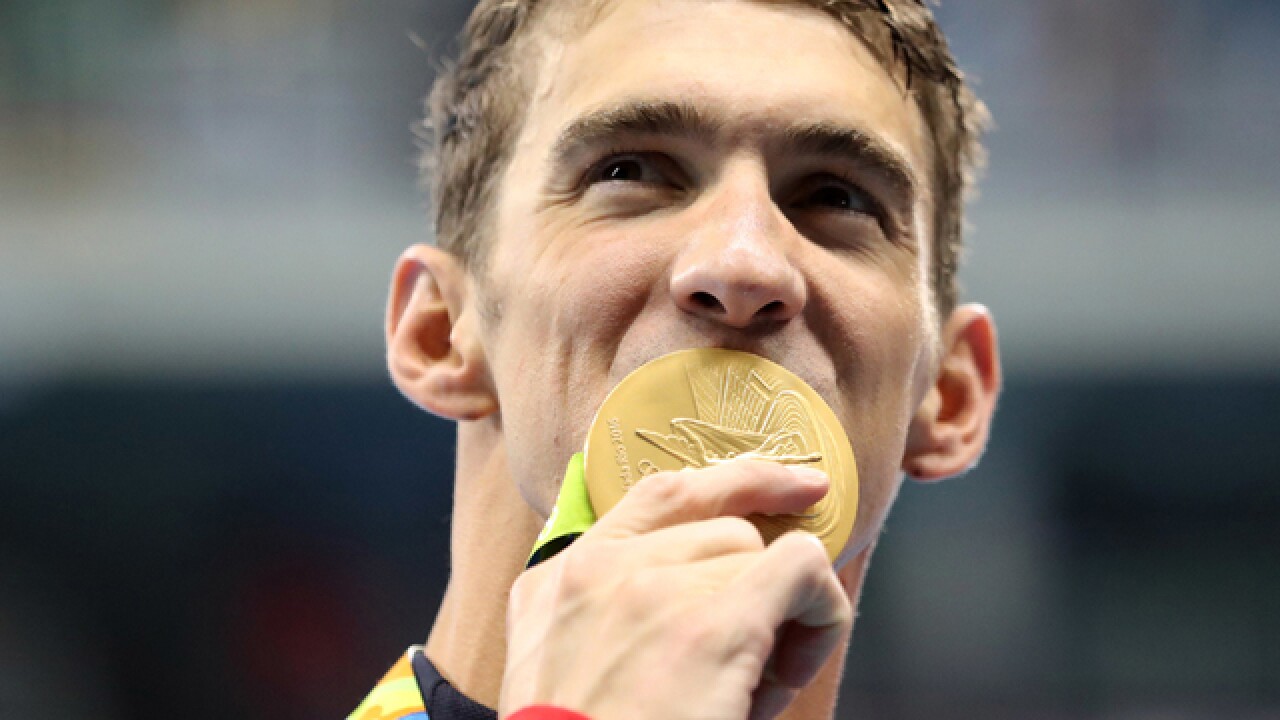 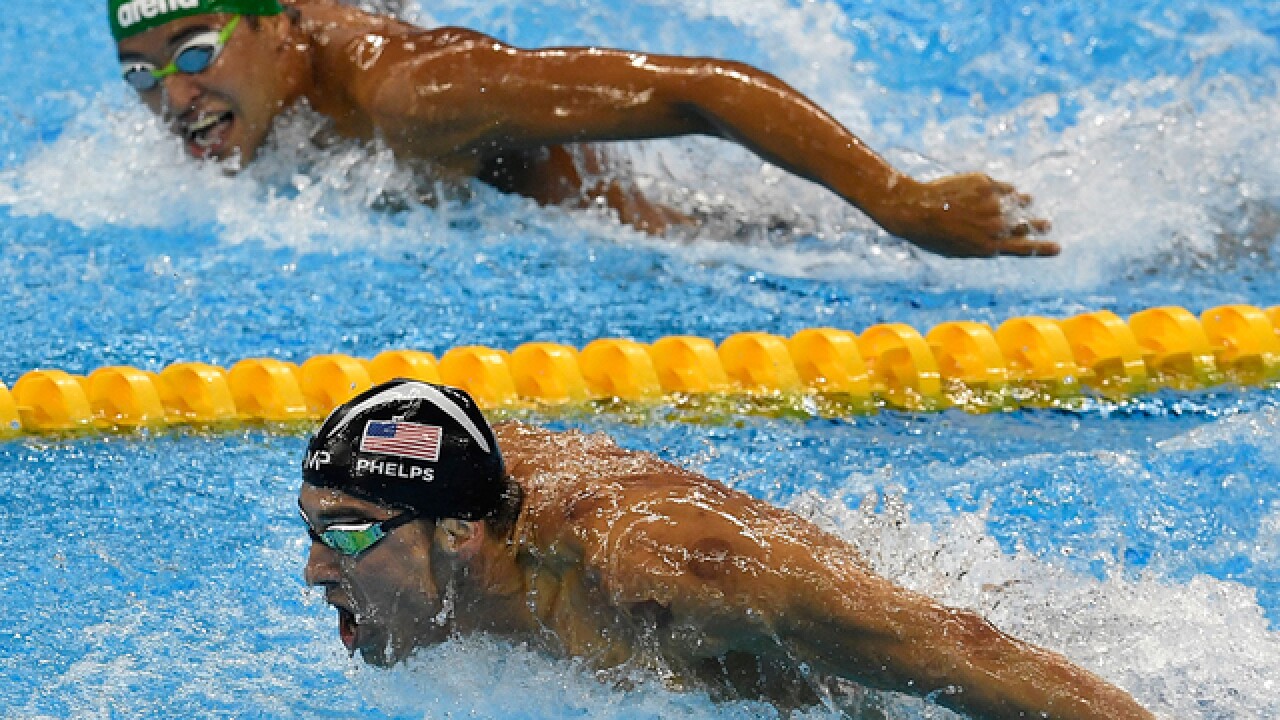 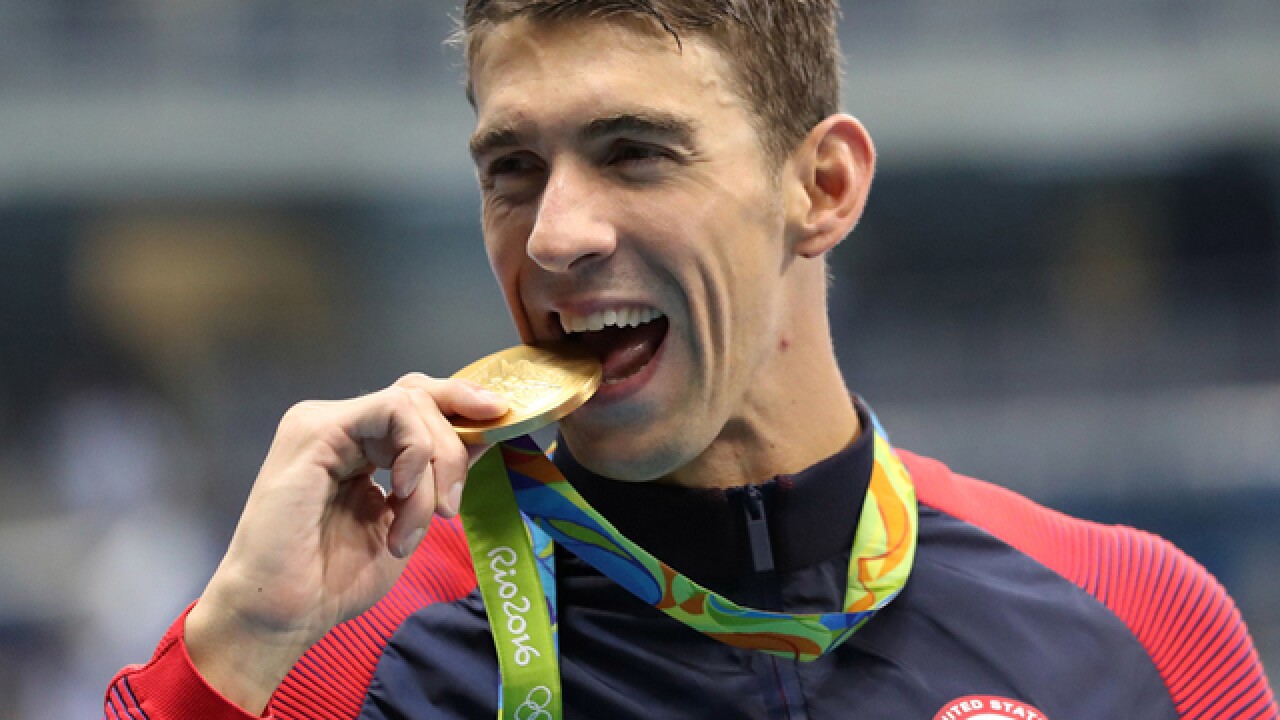 RIO DE JANEIRO (AP) -- Michael Phelps sat alone, thoroughly exhausted. He put his head in his hands and then motioned at his neck as though he had nothing left to give.

His work was done.

Phelps made up for one of the rare losses in his brilliant career by winning the 200-meter butterfly Tuesday night, a victory that sent him climbing into the stands to kiss his 3-month-old son Boomer. An hour later, he returned to take what amounted to nothing more than a triumphant victory lap in anchoring the 4x200 freestyle relay, the crowd's deafening roar growing louder with every stroke.

"That was probably one of my most challenging doubles," the 31-year-old Phelps said. "Doing a double like that is a lot harder than it once was."

It was another performance for the ages, but Phelps has done it so many times that nothing else would have been fitting. It came on a night that American teammate Katie Ledecky picked up her second gold of the Rio Olympics on the way to what could be a historic run of her own in the pool.

Phelps now has 25 medals in all, and three more races in Rio to add to his almost unimaginable total.

No other Olympian has more than nine golds.

"That's a lot of medals," Phelps said, shaking his head. "It's just insane."

The 200 fly was the one he really wanted, and it showed.

With challengers all around, Phelps simply wouldn't be denied. With his head nearly at the wall, he took one more stroke to make sure he got there first, his arms slamming against the timing pad.

That split-second decision got him to the wall ahead of everyone else, by a mere four-hundredths of a second.

When Phelps saw the "1'' by his name, he held up one finger. Then he sat on a lane rope, egging on the roaring crowd at the Olympic Aquatics Center with both hands, before emphatically pumping his fist.

Tears welled in his eyes as he listened to the national anthem - until one of his buddies from Baltimore cracked him up that shouting out "O'' like they do at Camden Yards before Orioles' games. Then, during the customary stroll around the pool to pose for photographers, Phelps broke ranks and bounded into the stands to plant a kiss on Boomer, the son who symbolizes just how much Phelps' life has changed since a second drunken-driving arrest two years ago.

"I wanted to hold him longer," Phelps said. "It's good to see he's awake. He usually sleeps all the time."

Phelps held off Japan's Masato Sakai with a time of 1 minute, 53.36 seconds, but that number was of little concern.

The only thing that mattered was beating everyone else.

"The last 10 meters were not fun," Phelps said. "My gosh, I thought I was standing still."

Four years ago, Phelps mistimed his finish in the wind-milling stroke he does better than anyone, gliding to the wall a little too long after his final whirl of the arms. That allowed Chad le Clos of South Africa to stunningly win gold in an event that Phelps had dominated for the better part of a decade.

Phelps retired after the London Games, so it looked like he wouldn't get a chance to make up for his defeat. But when he decided about a year later to start competing again, the 200 fly was clearly the title he sought more than any other.

"This is the race I really wanted back," he said.

Le Clos was in the final again, thoroughly inspired himself by his mother and father, both battling cancer and in the stands cheering him on.

But the South African could only manage fourth this time, also finishing behind bronze medalist Tamas Kenderesi of Hungary.

The relay was much less dramatic.

Conor Dwyer, Townley Haas and Ryan Lochte went out ahead of Phelps, handing off a commanding lead to the most decorated athlete in Olympic history.

Phelps essentially spent the next 100 seconds or so soaking up the cheers. He was only the third-fastest swimmer on his team, but he was a full body length ahead of Britain's James Guy when he touched in 7:00.66.

Sure, Phelps hogged the spotlight on this night, but let's not forget two other very impressive swimmers.

Ledecky took the most challenging step toward a feat that's only been done one other time, holding off Sweden's Sarah Sjostrom to win the 200 freestyle and give the American star her second gold of the games.

Debbie Meyer is the only female swimmer to capture the three longest freestyle events at a single Olympics, winning the 200, 400 and 800 at the 1968 Mexico City Games. Ledecky looks like a lock to match Meyer, having already won the 200 and 400 titles and an overwhelming favorite in the 800, where she's the world-record holder and far faster than anyone else in the world.

Katinka Hosszu is having quite an Olympics, too.

The Hungarian known as the "Iron Lady" earned her third gold medal of the Rio Games with a victory in the 200 individual medley.

This has been an Olympics of redemption for Hosszu, a long-time star at the world championships who always seemed to come up short on the biggest stage.

Hosszu added to her wins in the 400 IM and 100 backstroke with a time of 2:06.58. Siobhan-Marie O'Connor of Britain challenged Hosszu all the way but had to settle for silver. Maya DiRado of the United States held on for the bronze.

For Phelps, another retirement looms.

This time, he can fade away with the gold he really wanted in the 200 fly.

"That event was kind of like my bread and butter," Phelps said. "That was the last time I'll ever swim it."