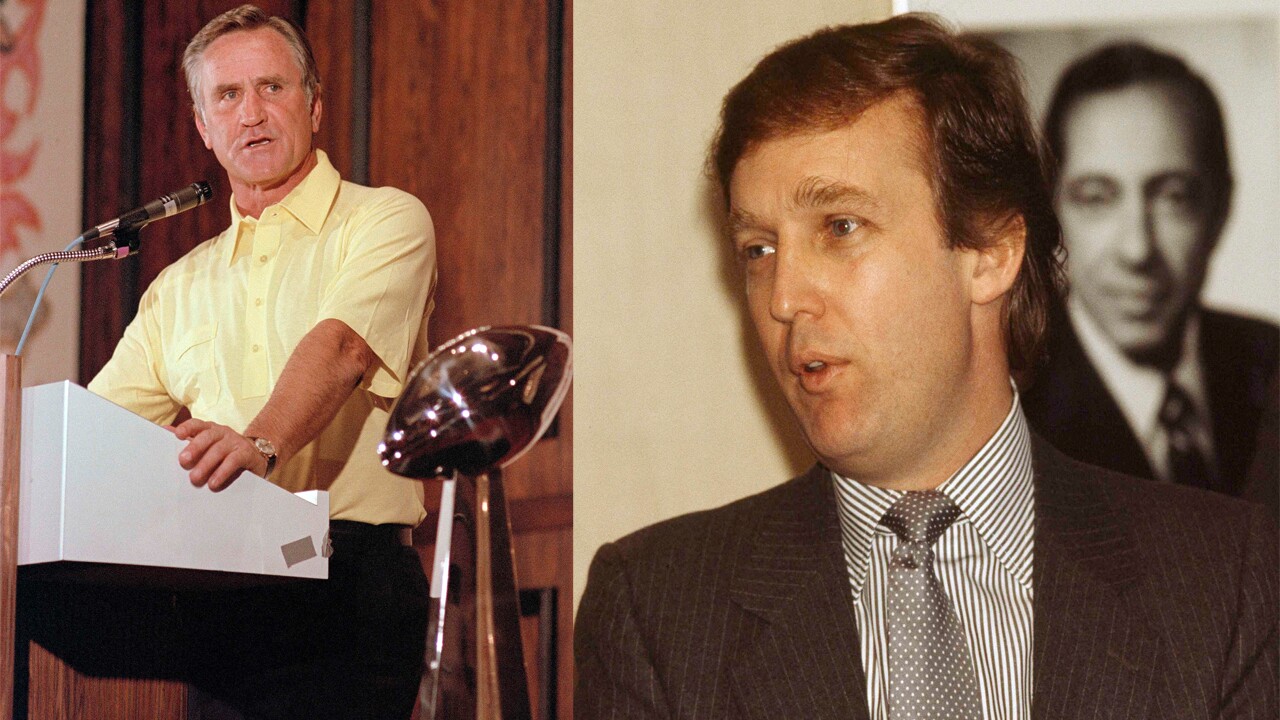 (Copyright 2020 The Associated Press. All rights reserved. This material may not be published, broadcast, rewritten or redistributed.)
Miami Dolphins head coach Don Shula nearly bolted for the USFL&#39;s New Jersey Generals, owned by Donald Trump, in 1983.

WEST PALM BEACH, Fla. — Before he became commander in chief, President Donald Trump once tried to lure former Miami Dolphins head coach Don Shula away from the NFL with a lucrative contract to defect to the USFL.

Shula, who died Monday at the age of 90, ultimately resisted the temptation to leave South Florida for the tri-state area and the upstart spring football league, proving to be a fortuitous decision for the man who would go on to become the NFL's all-time wins leader.

But in the fall of 1983, it would have been hard to fault Shula had he decided to part ways with the Dolphins and owner Joe Robbie, who hired him to replace the fired George Wilson in 1970.

Shula, who was earning about $400,000, admitted that Trump offered him a five-year contract worth $1 million annually, which, at the time, was an unprecedented salary for a football coach.

The Dolphins had won back-to-back Super Bowls under Shula in the 1970s, including the NFL's only perfect season in 1972, and were coming off an appearance in Super Bowl XVII to cap the 1982 season. But Shula was in the final year of his contract in 1983 and hadn't come to terms with Robbie on an extension as the season began.

At about the same time, Trump took ownership of the Generals after their debut season. Seeking a high-profile coach for his new franchise, which he had initially angled to purchase in 1982 before backing out, Trump targeted Washington Redskins head coach Joe Gibbs. When that didn't work, Trump turned his attention to Shula.

"Nothing's resolved," Shula said in October 1983. "I've said before and I'll say again that I'm going to give Joe Robbie every opportunity to see if something can be worked out. If it doesn't, then Donald Trump could be one of my options."

If Shula had indeed been sold on Trump's offer, the New York real-estate magnate didn't do himself any favors when he publicly pronounced that Shula wanted to work for him. His comments were broadcast on television during halftime of a Dolphins game.

A sticking point, according to Trump, was an apartment in Trump Tower, which Shula neither confirmed nor denied.

"Don is a good man, an excellent guy, really," Trump said at the time. "He just called me to say he was no longer interested, but I could not have done the deal. I could not have given him an apartment in Trump Tower. Money is one thing. Gold is another. I wasn't very enthusiastic over the past few days. There was no way I could part with the apartment. I guess he was a little upset that the apartment thing came out. You know he was interested."

That may have been true, but one of Shula's former players from the undefeated season, Larry Csonka, who was then an executive with the USFL's Jacksonville Bulls, said years later that he believed Shula wanted the job but was angry about being "thrown out to the press" by Trump.

"I had the opportunity to review a tape in which Donald Trump said that I was all set and ready to go and the only thing he had to do was to meet certain economic conditions," Shula said after announcing that he was no longer interested in the job. "I've never felt that I, in any way, have ever committed myself to that extent. When I was approached, I showed interest in the offer and in what they had to say. The only way I could make an intelligent decision was to get all the facts, which is all that I ever attempted to do without any commitment at all."

In the end, things worked out in Miami's favor. After all, that was the same year the Dolphins drafted a quarterback by the name of Dan Marino.

Although the Dolphins never won a Super Bowl during the Shula-Marino era, they did find sustained success, reaching the playoffs 10 times during their 13 years together.

Shula eventually signed a contract extension worth nearly $3 million, remaining with the Dolphins until his retirement after the 1995 season.

Meanwhile, Trump ruined the last best chance of a rival football league challenging the NFL in the fall, pursuing an antitrust lawsuit as a way to force a merger. The legal battle sacked the USFL's chances of survival. After being awarded a $1 judgment, the USFL folded in 1986.

Of course, Trump went on to bigger and better things, namely defeating Democratic nominee Hillary Clinton in the 2016 presidential election to become the 45th president of the United States.