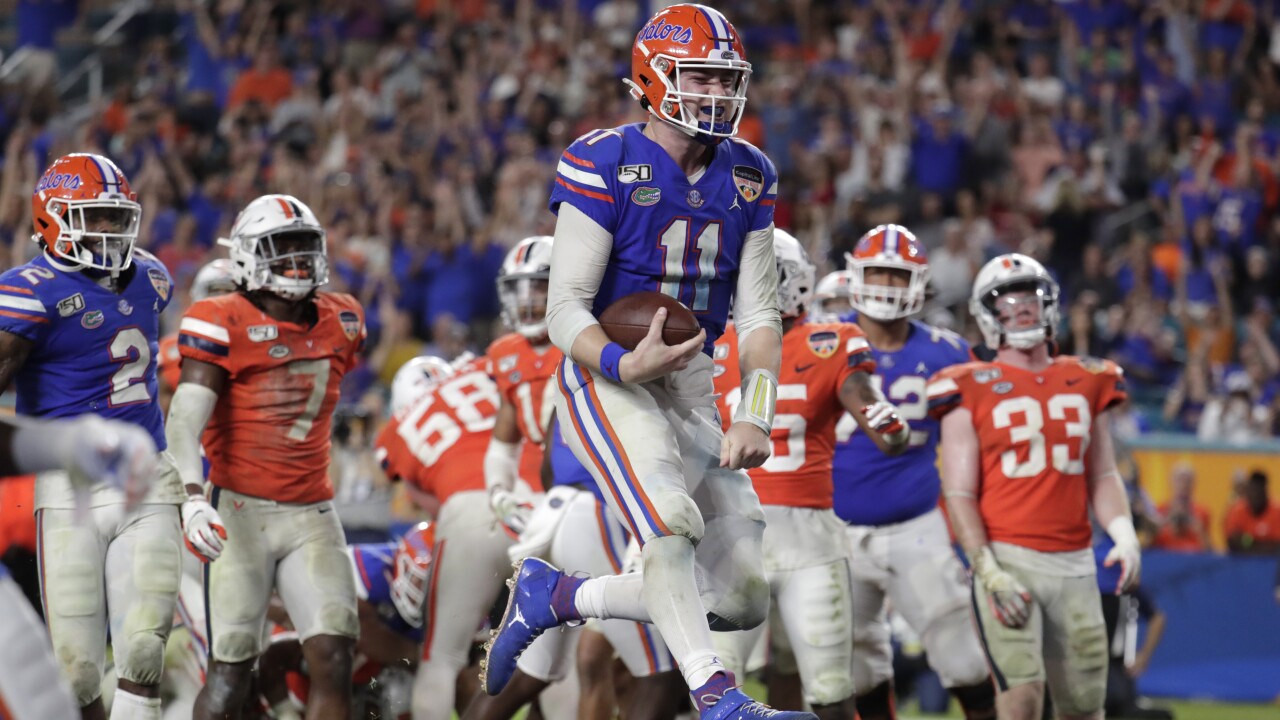 (Copyright 2020 The Associated Press. All rights reserved. This material may not be published, broadcast, rewritten or redistributed.)
Lynne Sladky/AP
Florida quarterback Kyle Trask scores a touchdown during the second half of the Orange Bowl against Virginia, Monday, Dec. 30, 2019, in Miami Gardens, Fla.

GAINESVILLE, Fla. — Even though the Gators don't yet know who they'll play when they begin the 2020 season, at least they know they'll do so ranked in the top 10.

Florida is ranked No. 8 in the preseason coaches poll released Thursday.

The Gators are the only Florida school ranked in the top 10 and one of just two teams from the Sunshine State ranked among the top 25, joining No. 21 Central Florida. Miami, which finished 6-7 last season after losing their final three games of 2019, received 58 votes.

Clemson claimed the top spot in the preseason poll for the second consecutive season, while defending national champion LSU is fifth. The Tigers of LSU defeated the Tigers of Clemson in last season's College Football Playoff National Championship.

Ohio State, which fell to Clemson in the CFP semifinal at the Fiesta Bowl, is ranked No. 2.

No. 3 Alabama, which missed the playoff last season for the first time since it began to conclude the 2014 season, and No. 4 Georgia join LSU as the three Southeastern Conference teams ranked ahead of the Gators.

Rounding out the top 10 are No. 9 Oregon and No. 10 Notre Dame. The Fighting Irish are playing an Atlantic Coast Conference schedule for this season only.

Florida is still waiting to learn its full schedule after the SEC announced it will play a 10-game, conference-only schedule in 2020 because of the coronavirus pandemic. The announcement also forced the end of its longstanding rivalry with Florida State. The two teams won't meet on the football field for the first time since the rivalry began in 1958.

The Gators are coming off back-to-back double-digit seasons and consecutive New Year's Six bowl victories under head coach Dan Mullen, who is 21-5 in his first two years at Florida.