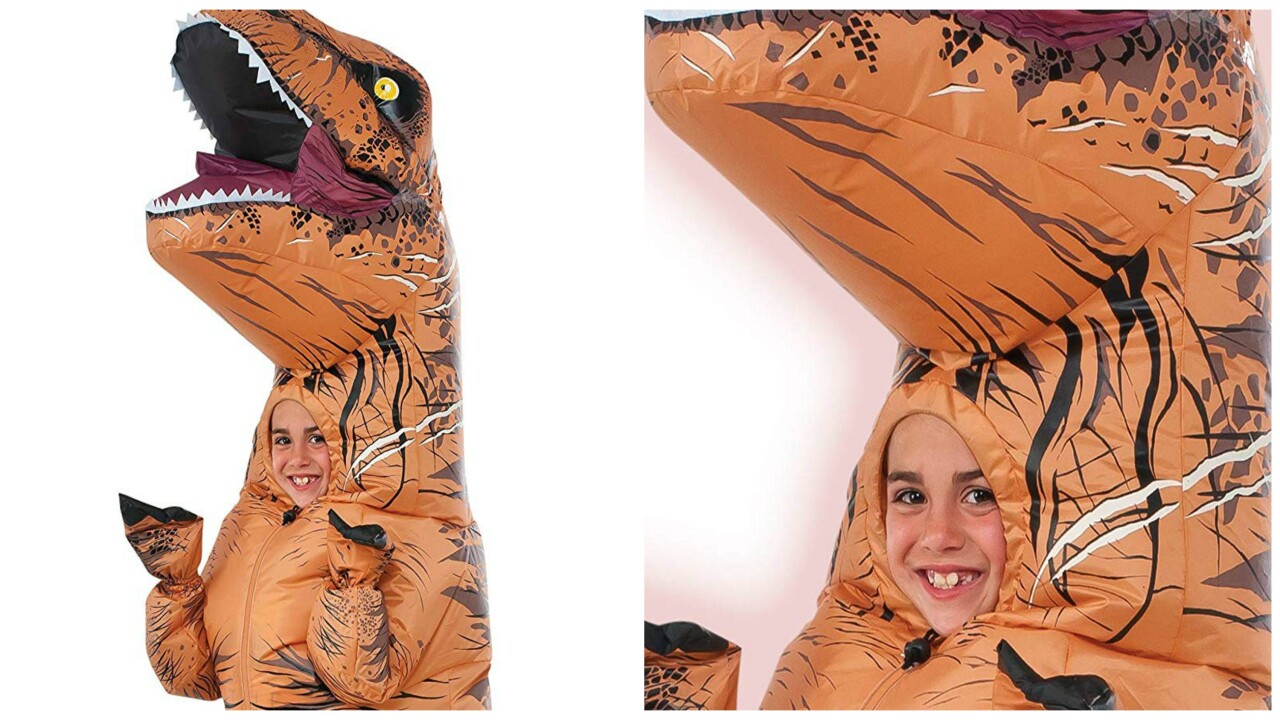 The popular T-rex costume that’s been the stuff of viral YouTube videos is currently on sale, meaning that your longtime dreams of frolicking about your neighborhood dressed up as a dinosaur are finally within reach.

You’ve likely seen this dinosaur costume before. It’s been donned by a meteorologist on air during a weather report. It’s been worn during protests. It’s been used in pregnancy announcements, during wedding ceremonies and as part of lighthearted pranks that families have played on their children. The costume has proven so popular that it’s even been featured in mini-documentaries by publications like Vulture and SyFy Wire.

The extent to which this costume has become a part of popular culture is wild, especially when you learn that the costume only came into being as a means of cashing on the popularity of movie-themed costumes. At the time, “Jurassic World” was having a moment. So the folks at Rubie’s Costume Co. got to brainstorming, eventually coming up with an outfit that used the same technology as their inflatable sumo suits. But they couldn’t foresee what would come next.

What is it about these costumes that inspire so much tomfoolery? We feel it might have something to do with the awkward ridiculousness of the suit. No matter what context in which you spot the suit in action, it just spreads pure joy!

Waiting for the bus like this on Molly's first day of Kindergarten.• oversized dinosaur backpack • dinosaur shirt for…

Which is why we’re so excited about this sale.

The kid’s version of Rubie’s Jurassic World T-Rex Inflatable Costume, which usually costs $59.99, is on sale on Amazon right now for $26.54. That’s a savings of 56%! This version is labeled as a child’s size small and generally fits kids younger than 7 years old.

If you’re an Amazon Prime member, the costume qualifies for free same-day shipping. While you’re at it, get a pack of AA batteries, which you’ll need to keep the fan going and ensure the costume stays inflated. The fan works with a clip-on battery pack.

There’s also a version of this costume that comes with a soundbox. Get it for $49.

The Velociraptor version is pretty cool, too. It’s discounted to $44.71 on Amazon. It was originally priced at $64.99, making for a savings of 36%. It also qualifies for same-day shipping from Amazon Prime.

We kind of like the Triceratops inflatable costume, though:

According to Walmart, the Triceratops inflatable costume usually costs more than $232. The store has it on sale right now for $81.55.

Will you be wearing an inflatable costume this Halloween? Is this sale the impetus you need to finally make your viral dreams come true?