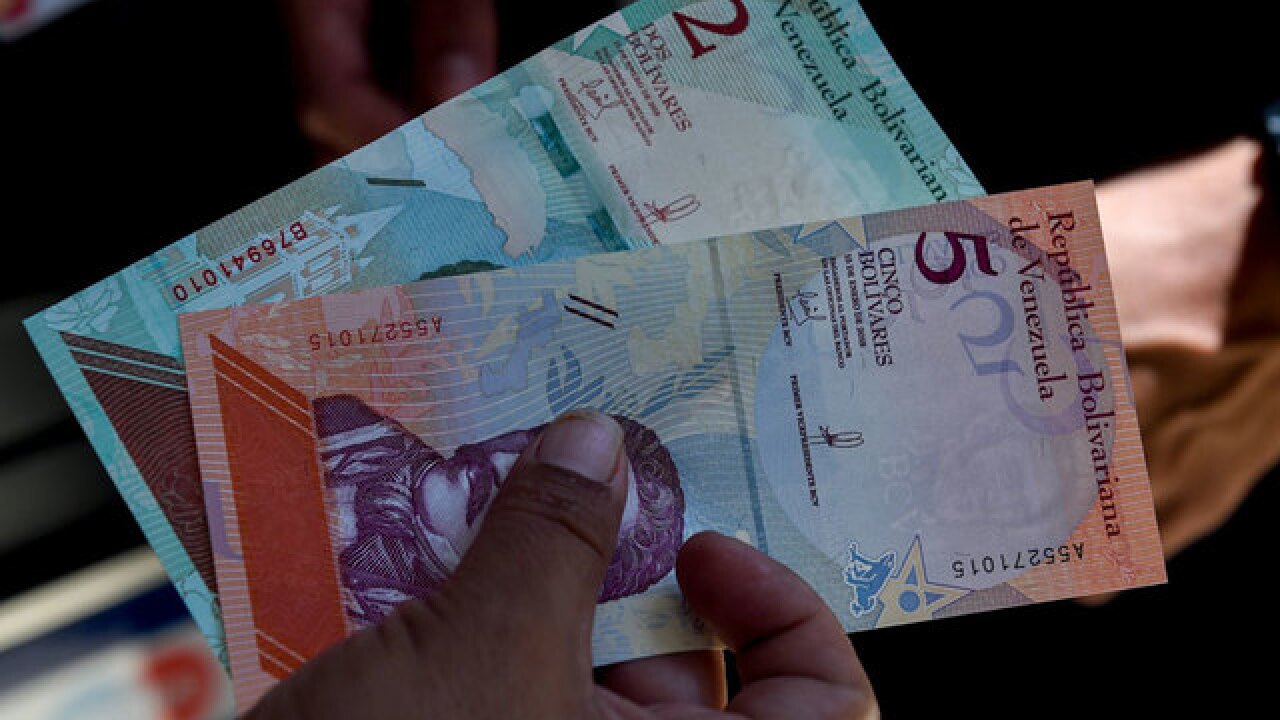 &lt;p&gt;Venezuela is issuing new banknotes after lopping five zeroes off the crippled bolivar.&lt;/p&gt;

(CNN) -- Venezuela issued a new currency Monday in an attempt to bolster its crumbling economy as the International Monetary Fund (IMF) warned that inflation could hit one million percent this year.

The move, part of a dramatic raft of measures aimed at halting runaway hyperinflation, comes as thousands of Venezuelans continue to flee across the border into neighboring countries amid food and medicine shortages, political turmoil and soaring crime rates.

In a tweet posted following the unveiling of Venezuela's new currency Monday, the country's president Nicolas Maduro hailed the recovery package as a "revolutionary formula."

"We found the revolutionary formula that puts work in the center of the general re-adjustment of society, based on the production of goods and the value of salary. With that, we're gonna put to rest forever the perverse model that dollarized the prices in the country," tweeted Venezuela's 55-year-old leader.

"I call on the people to defend -- conscientiously -- the adjustment of the prices on street," Maduro later said in another tweet.

A bank holiday was declared Monday, with banks remaining closed as the new currency took effect.

The rebranded currency, which has five fewer zeroes than the country's previous currency and will be pegged to a cryptocurrency called the Petro, is intended to simplify transactions.

Speaking to CNN from Caracas, journalist Stefano Pozzebon, said the new currency represented a "significant change" for the millions of Venezuelans who will have to deal with the numerical conversions.

"I went to the pharmacy and saw that a can of coke, for example, cost 2,800,000 of the older Bolivar, the ones that were still in use until yesterday at 8 p.m. This morning, the staff of the pharmacy were busy labeling the products with the new prices, and the can of coke will cost 28 bolivars."

However, experts remain unconvinced. Writing in Forbes, economist Steve Hanke of the Cato institute likened the measures to cosmetic surgery, describing the new currency as a "scam."

"The bolivar's redenomination will be like going under the knife of one of Caracas's famed plastic surgeons. Appearances change, but, in reality, nothing changes. That's what's in store for the bolivar: a face lift."

The government is "gambling everything and experimenting in an irresponsible way, " wrote Capriles in an online essay, in which he accused Maduro of "starving his own people."

A survey from February this year found that almost 90% of Venezuelans live in poverty and more than 60% surveyed said that they did not have enough money to buy food.

The new economic measures include a 60-fold increase in the minimum wage that will take effect September 1.

In an address Friday, Maduro said the government will provide assistance on the minimum wage increase for 90 days but employers are nervous they won't have enough money to pay their staff.

Explaining the measures on national television Sunday night, Maduro said: "This is a really impressive, magic formula that we discovered while studying with our own, Venezuelan, Latin American-rooted thinking."

The latest announcements caused merchants to close their doors over the weekend, not knowing how to reflect the new currency in their pricing. Shoppers, on the other hand, rushed to supermarkets and gas stations that remained open.

In a Facebook Live address Sunday, Maduro described the measures as part of a "re-balancing process."

"This does not happen overnight," he said. "This re-balancing process will be developed. This is a magic formula that is truly impressive. That we discovered through our own thoughts and analysis."

Amid the chaos, there have been attempts on Maduro's life. Two high-ranking military officers were detained earlier this month in connection with an alleged drone attack against Maduro. The government said drones armed with explosives flew toward the president as he spoke at a military parade.

Maduro has accused opposition groups of orchestrating the August 4 failed attack and claimed the "financiers and planners" of the operation live in Florida.

Once land of opportunity

According to the United Nations High Commissioner for Refugees (UNHCR) more than half a million Venezuelans have crossed into Ecuador via Colombia since the start of the year, with some 30,000 entering in the first week of August alone.

But the mass exodus is ratcheting up tensions in neighboring countries. On Sunday, Brazil announced it would deploy 120 men from the country's national force to the border state of Roraima, where hostility towards Venezuelan migrants has led to violence.

On Saturday, a mob of Brazilians attacked a group of Venezuelans in a border city and destroyed a migrant camp after a local business owner was robbed by Venezuelans, according to Brazil's state run news outlet, Agencia Brasil. Around 1,200 Venezuelan migrants fled back over the border after the attack.

A judge had earlier ruled to prohibit the entry of all Venezuelans to the state but the decision was overturned by Brazil's supreme court.

The Brazilian government has said it is committed to helping Venezuelans and will continue to try to spread migrants throughout various states in the country.

The Venezuelan government issued a statement asking the Brazilian government to "take measures to safeguard and secure" Venezuelan citizens, "their families and belongings."

CNN was present at the border and spoke to some of the migrants. Many were caught by surprise, having started their journeys before the measure went into effect.

"My family is fragmented, destroyed. We're no longer together," one Venezuelan migrant told CNN Sunday. "My son is in Peru, my daughter in Chile, I have yet another daughter who's on her way to Poland. Give me a break! When will I get them all together again? My wife is in Venezuela. The situation is dire."

On Sunday as Ecuador's Interior Ministry relaxed the identification rule slightly, saying on Twitter that the law allows for children and adolescents to not present their passport "as long as both parents have it and show their relationship of filiation and kinship."

The Ecuadorian government has declared a state of emergency in human mobility in three provinces, meaning it can assign additional resources to Venezuelans.

Ecuador is both a destination and transit point for Venezuelans escaping the humanitarian crisis in their own country. Some of the migrants are also heading towards Peru and countries further south.

The Peruvian government has followed Ecuador's lead, announcing Saturday that beginning August 25, Venezuelan citizens who want to enter Peru can only do so with a valid passport.

It is a reversal of fortunes for Venezuela, which was once the richest country in Latin America and a destination of choice for those fleeing turmoil in the region during the 1970s and 80s.

Colombians fleeing civil war, Peruvians fleeing the political and economic instability under Alberto Fujimori and Chileans fleeing the Pinochet dictatorship sought refuge in the oil-rich country, which was seen as a land of opportunity.

Venezuelans filed 117,000 asylum claims in the first six months of this year, surpassing the total number of claims made in 2017, according to the UNHCR.

"The exodus of Venezuelans from the country is one of Latin America's largest mass-population movements in history," UNHCR spokesman William Spindler said in a statement. "Many of the Venezuelans are moving on foot, in an odyssey of days and even weeks in precarious conditions."