UN Syria envoy: Only Plan B to talks is 'return to war' 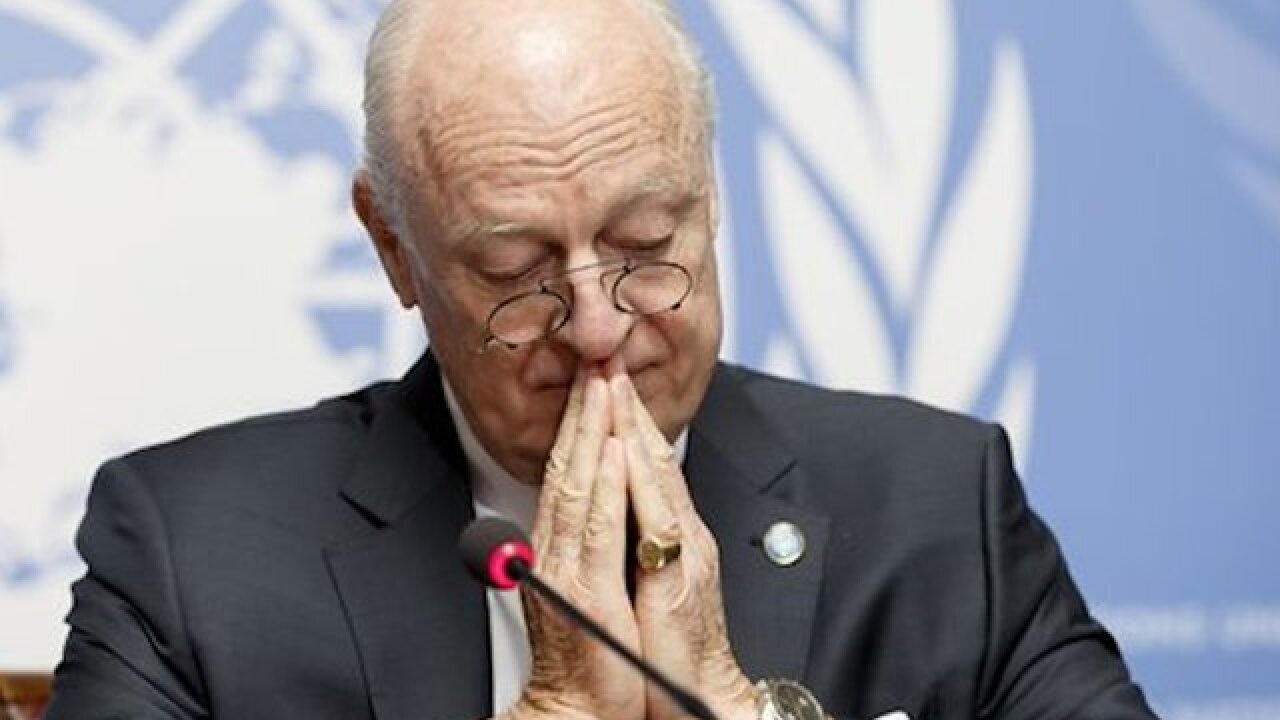 Copyright Associated Press
&lt;p&gt;UN Special Envoy of the Secretary-General for Syria, Staffan de Mistura , informs the media at the European headquarters of the United Nations in Geneva, Switzerland, Monday, March 14, 2016. Mistura calls peace talks "a moment of truth," says the "only Plan B available is return to war." Steffan de Mistura spoke to reporters just moments before resuming "proximity talks" in Geneva slightly over a month after suspending them in an upsurge in violence in Syria. (Salvatore Di Nolfi/Keystone via AP)&lt;/p&gt;

GENEVA (AP) — The U.N. special envoy for Syria restarted peace talks between the government and the opposition on Monday, warning that the only alternative is a return to war and describing the political transition in the country now led by President Bashar Assad was "the mother of all issues."

Moments before meeting with a Syrian government envoy Staffan de Mistura, laid out both high stakes and low expectations for what is shaping up as the most promising initiative in years to end the conflict that moves into its sixth year on Tuesday. At least a quarter of a million people have been died.

The talks follow striking achievements in recent weeks: A cease-fire that began Feb. 27, vastly reducing the bloodshed, and the recent resumption of humanitarian aid deliveries to thousands of Syrians in "besieged areas" — zones surrounded by fighters and generally cut off from the outside world.

De Mistura laid out a stark choice for Syrian parties in the talks, saying: "As far as I know, the only plan B available is return to war — and to even worse war than we had so far."

The two sides are deeply split on Assad's future. His foreign minister, Walid al-Moallem, said Saturday that any talk of removing Assad during a transitional period sought by the U.N. was "a red line," and rejected the international call for a presidential election to be held within 18 months — a key demand of the opposition.

But de Mistura, keeping to language laid out in the U.N. Security Council resolution in December that paved the way for the talks, insisted that political change, including a timetable for new elections within 18 months, was the ultimate goal.

"What is the real issue — the mother of all issues? Political transition," he said.

In the so-called proximity talks, the two sides don't meet face to face, but meet separately with de Mistura and his team, who shuttle back and forth.

The talks began Monday with de Mistura hosting a government delegation led by Syria's U.N. ambassador, Bashar Ja'afari. Speaking to reporters afterward, Ja'afari called the meeting "positive and constructive" and said the government delegation "submitted ideas and views" for a political solution to the crisis. He said the opposition will meet de Mistura on Tuesday, and his delegation would meet again on Wednesday.

Ja'afari says his team wants "to negotiate as Syrians under Syrian leadership without foreign intervention and without preconditions," and said any side that opposed this premise is "trying to sabotage this round." He was referring to opposition demands from the previous round including an end to bombardment, release of detainees and the lifting of the siege by government troops on rebel-held areas.

De Mistura said that "spoilers will try to upset the talks," which he described as "a moment of truth." He suspended the talks only days after they started last month amid an upsurge in violence, notably blistering air strikes by Syrian government and allied Russian forces near Aleppo, Syria's largest city.

For this new phase, de Mistura said the onus for achieving successful talks rests also with the U.N. Security Council, the International Syria Support Group of 18 regional states and world powers — especially the U.S. and Russia. The two countries have spearheaded the process and struck a deal that paved the way for the cessation of hostilities two weeks ago.

"The real peace-makers here are the peace-making powers who wanted these talks — the ISSG and the Security Council members — and hopefully the Syrian sides," de Mistura said. If there doesn't appear to be willingness to negotiate during these and future talks, "we will bring the issue back to those who have influence," he said.

Western powers are largely backing the opposition — led by the Saudi-backed High Negotiations Committee — while Russia and Iran have been key supporters of Assad.

The talks have shaped up as the best, if distant, chance in years to end a war that has created an opening for radical groups including Islamic State and the al-Qaida-backed Nusra Front to gain large swaths of land, and prompted at least 11 million people to leave their homes — many abroad to places like Turkey, Jordan, Lebanon and Iraq, as well as to Europe.

Some call the talks "Geneva III," a reference to two other rounds of talks that failed two years ago. U.N.-designated extremist groups like IS and Nusra Front are excluded, and the cease-fire doesn't apply to areas they control.