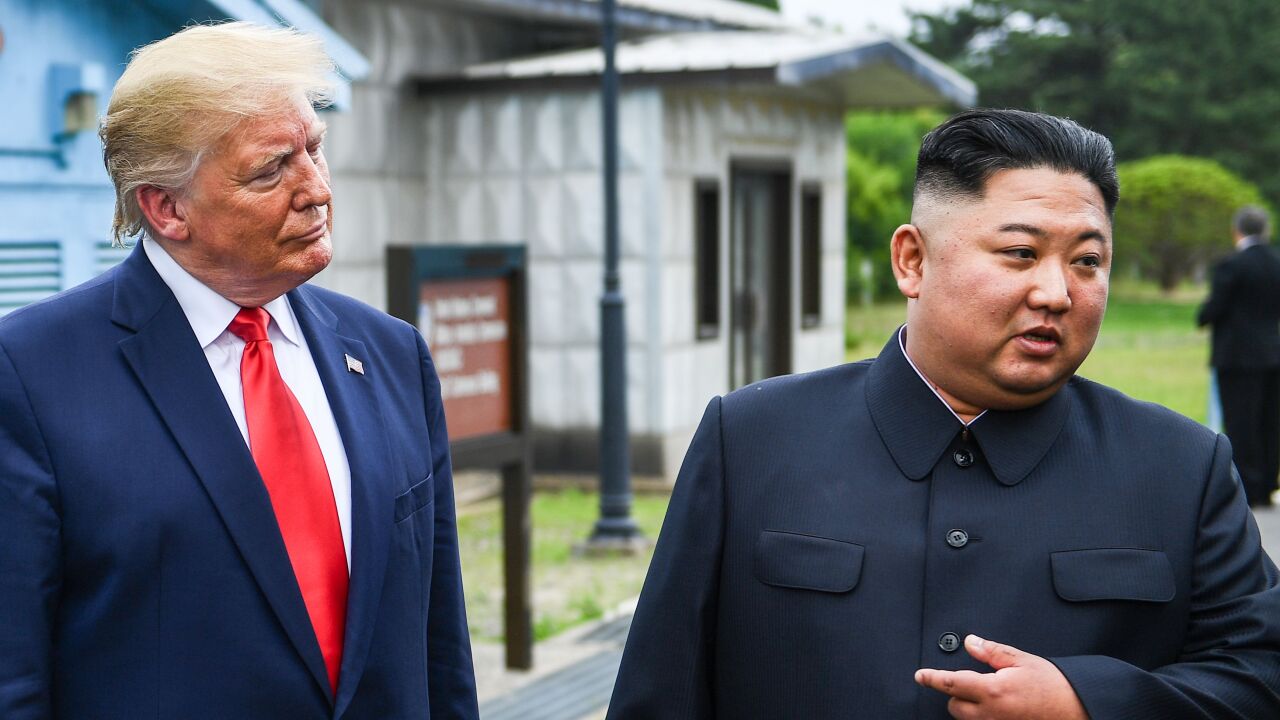 "Kim Jong Un is too smart and has far too much to lose, everything actually, if he acts in a hostile way," Trump wrote in a pair of tweets. "He does not want to void his special relationship with the President of the United States..."

The warning from Trump, whose at-times rocky relationship with Kim has been a hallmark of his presidency, comes as a senior administration official tells CNN that the White House has "seen the reports of a test, and are coordinating closely with allies and partners." On Saturday, the Korean Central News Agency reported that a "very important test took place at the Sohae Satellite launching Ground" that day.

According to KCNA, the test produced a "successful result," was of "great significance," and will "change the strategic position of North Korea in the near the future." However, it was not immediately clear what was tested.

A satellite image obtained by CNN Thursday indicated North Korea may be preparing to resume testing engines used to power satellite launchers and intercontinental ballistic missiles at Sohae, according to experts who analyzed the photo.

It showed new activity at the site and the presence of a large shipping container at the facility's engine test stand, according to Jeffrey Lewis, director of the East Asia Nonproliferation Program at the Middlebury Institute, which works in partnership with the imaging company.

"Vehicles and objects appear on December 7 to conduct the test. They are mostly gone on December 8, but the ground appears to have been disturbed by the exhaust from the test," he noted.

Bruce Riedel of the Heritage Foundation, along with several other North Korea analysts, have noted that the Trump administration has not taken a very tough approach with Pyongyang, declining to apply a wide range of the sanctions at its disposal against either North Korea or countries that do business with it, such as China.

The White House has also made repeated concessions to Kim, canceling and postponing the Pentagon's joint military exercises with South Korea, most recently in November, after North Korea had objected. Those steps have not yielded progress, Klingner and others say.

Though Trump said in his Sunday tweets that North Korea "must denuclearize as promised," the country's ambassador to the United Nations, Kim Song, said Saturday that denuclearization was off the table in negotiations with the US, which he claimed had been a "time-saving trick" to benefit a "domestic political agenda."

Diplomats from Pyongyang and Washington have been attempting to negotiate a trade that would see Kim give up the country's nuclear weapons and the ballistic missiles used to deliver them in exchange for relief from punishing US and United Nations sanctions that have crippled the North Korean economy.

But North Korea is seeking sanctions relief the US has so far refused to provide and working talks have failed to get off the ground. Some analysts say North Korea has little incentive to deal with lower level US officials when the President has repeatedly inserted himself into negotiations and based them, in part, on the strength of his relationship with the North Korean leader.

The potential tests this weekend should come as no surprise to Trump as Pyongyang has been threatening to do a test of some kind for some time, in part because the country is angry about not seeing sanctions relief and because the US and South Korea have continued with planning for joint military drills.

A foreign ministry official said last week that Pyongyang was preparing a "Christmas gift" for Washington, but warned that the present the Trump administration will receive depends on events in the coming days.

Trump's new warning could indicate a potential shift in his relationship with Kim, which he has touted as successful since he first met with the leader in 2018 in Singapore. On Saturday, the President told reporters at the White House that he has "a very good" relationship with Kim and that he thinks they both want to "keep it that way."

"The relationship is very good, but you know, there is certain hostility, there's no doubt about it," Trump said.

In October, CNN reported that Kim has praised his "special" relationship with Trump, with one of North Korea's most respected diplomats telling state media the two leaders maintain "trust in each other."

But as Trump noted, his relationship with North Korea hasn't always been rosy. In August 2017, the President threatened North Korea with "fire and fury like the world has never seen" if Kim continued to threaten the US.

Last week, a senior member of the North Korean government again described Trump as a "dotard" after he revived the war of words with Kim by calling him "Rocket Man."

"If any language and expressions stoking the atmosphere of confrontation are used once again on purpose at a crucial moment as now, that must really be diagnosed as the relapse of the dotage of a dotard," Choe Son Hui, North Korea's First Vice-Foreign Minister, was quoted as saying by the country's state news agency.

The statement was the latest in a series of increasingly dire warnings by North Korea, and recalled the strong language between the two leaders that escalated in 2017, before the landmark meeting the following year in Singapore.