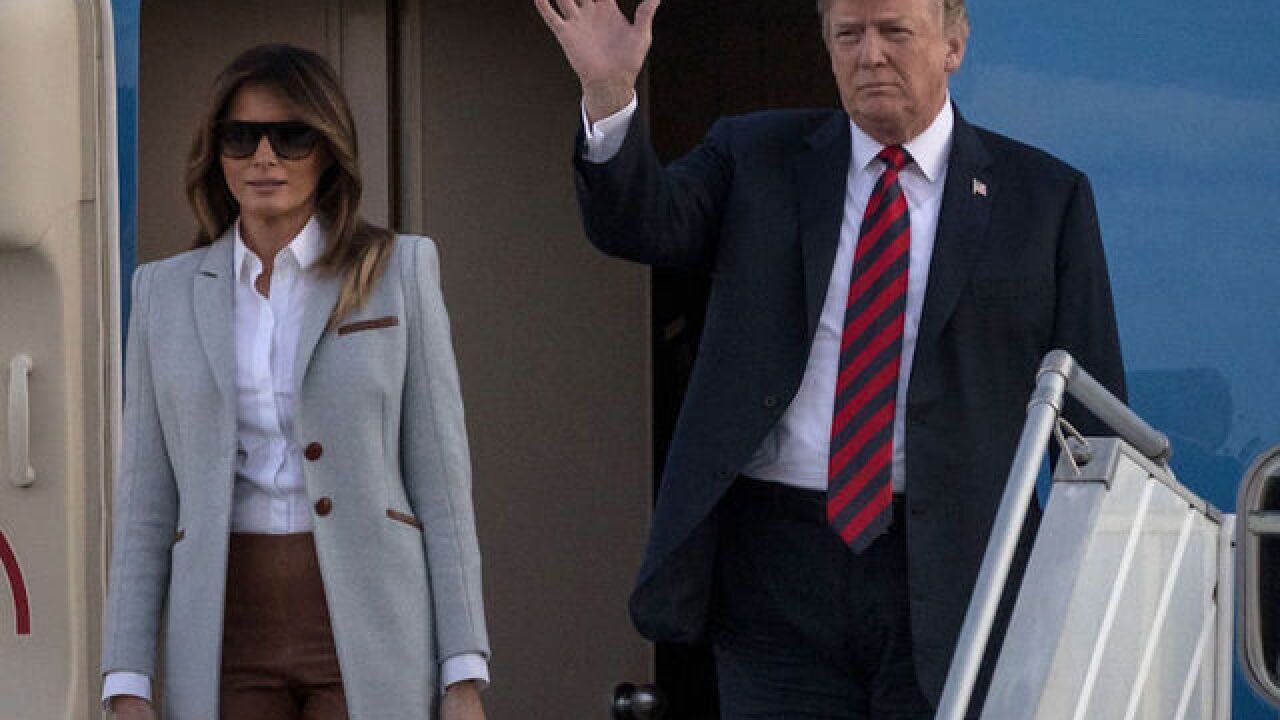 Image copyright 2018 Getty Images. All rights reserved. This material may not be published, broadcast, rewritten, or redistributed.
&lt;p&gt;U.S. President Donald Trump and first lady, Melania Trump arrive aboard Air Force One at Helsinki International Airport on July 15, 2018 in Helsinki, Finland. President Trump arrived in Helsinki for talks with Russian President Vladimir Putin. Trump said in a recent statement that he has " low expectations" for the meeting, however he is under increasing pressure to confront the Russian President directly about special counsel Robert Mueller's indictment of twelve Russians said to have conspired to sway the decision of the 2016 US election. &lt;/p&gt;

A Finnish newspaper is welcoming Donald Trump and Vladimir Putin to Helsinki with pointed messages about the free press.

The messages, which appear on 300 billboards, include: "Mr. President, Welcome to the land of free press" and "Trump calls media enemy of the people."

The US and Russian Presidents are meeting for talks in the Finnish capital Monday.

"As we welcome the presidents to the summit in Helsinki, we @hsfi want to remind them of the importance of free press. 300 billboards on the routes from the airport to the summit are filled with news headlines regarding presidents' attitude towards the press freedom," the senior editor-in-chief of the newspaper Helsingin Sanomat explained on Twitter.

US President Trump has frequently lambasted the press for what he calls "fake news" and has described it as "the enemy of the people."

As we welcome the presidents to the summit in Helsinki, we @hsfi want to remind them of the importance of free press. 300 billboards on the routes from the airport to the summit are filled with news headlines regarding presidents’ attitude towards the pressfreedom. #HELSINKI2018 pic.twitter.com/KmYJtLyeNE

"He has declared the press an 'enemy of the American people' in a series of verbal attacks toward journalists, attempted to block White House access to multiple media outlets, and routinely uses the term 'fake news' in retaliation for critical reporting," RSF says.

"The violent anti-press rhetoric from the highest level of the US government has been coupled with an increase in the number of press freedom violations at the local level as journalists run the risk of arrest for covering protests or simply attempting to ask public officials questions."

"Between draconian laws and website blocking, the pressure on independent media has grown steadily since Vladimir Putin's return to the Kremlin in 2012. Leading independent news outlets have either been brought under control or throttled out of existence," RSF says.

By contrast, Finland is ranked fourth, behind Norway, Sweden and the Netherlands.

Speaking to Jake Tapper in Helsinki about the billboards, CNN's Christiane Amanpour said the issue of press freedom was "about truth and lies and it's about democracy and dictatorship."

"Obviously [with] President Putin, you know there are scores of journalists in jail, there are political assassinations of opponents and journalists -- I mean, it's a whole different level," she said.

She added that given the American laws specifically protecting the freedom of the press, "it's a very troubling thing obviously to see [...] a constitutionally-guaranteed free and safe press to be under attack by their own leader."