Shelling near reporters in Syria shows limits of truce 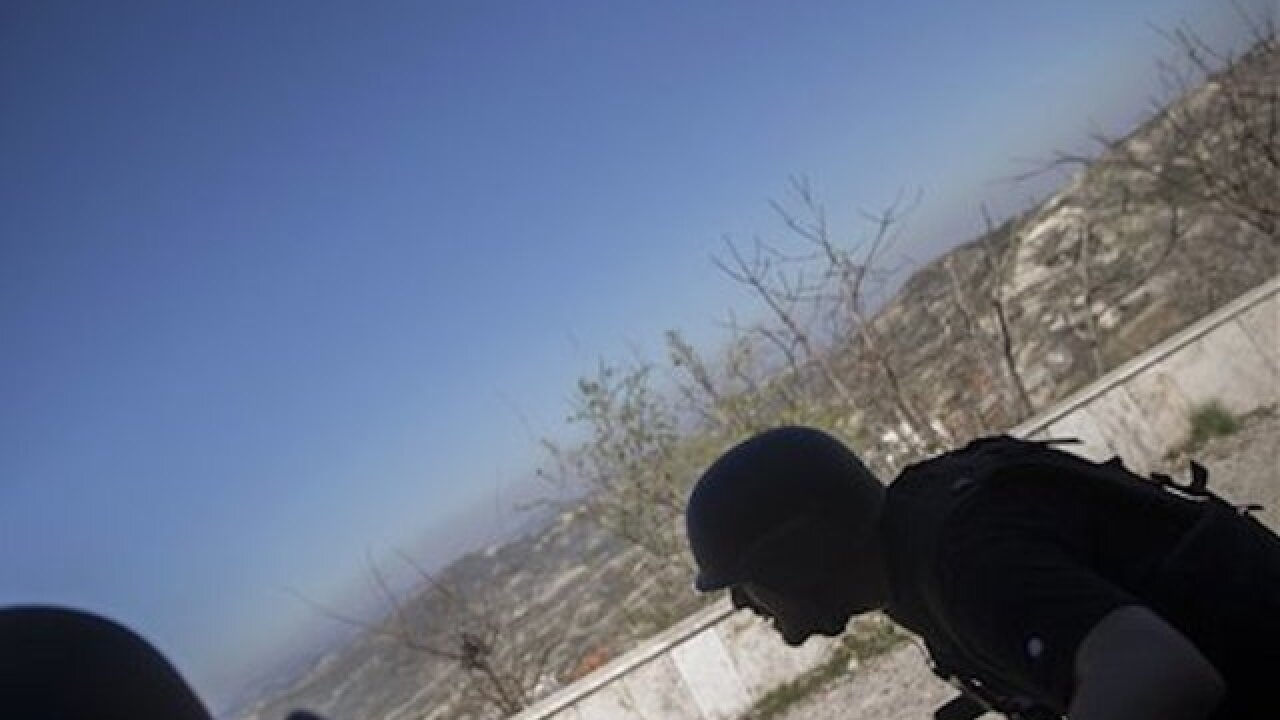 Copyright Associated Press
&lt;p&gt;Journalists run for cover after explosions in Kinsibba, Syria near the border with Turkey Tuesday, March 1, 2016. A series of artillery shells exploded on the main street of a Kinsibba near the Turkish border, sending a group of international reporters running for cover and underscoring the limits of Syriaís partial cease-fire. The journalists were visiting the village which overlooks the Turkish border, on a trip Tuesday organized by Russiaís defense and foreign ministries. (AP Photo/Pavel Golovkin)&lt;/p&gt;

KINSIBBA, Syria (AP) — A series of artillery shells exploded on the main street of a Syrian village near the border with Turkey on Tuesday, sending a group of visiting international reporters running for cover and underscoring the limits of Syria's partial cease-fire.

The journalists were visiting the government-controlled village of Kinsibba, which overlooks the Turkish border, on a trip organized by Russia's defense and foreign ministries.

Russian defense ministry spokesman Maj.-Gen. Igor Konashenkov, who was on the trip, said the projectiles came from positions held by the Nusra Front, al-Qaida's branch in Syria, which is excluded from the Russian and U.S.-brokered cease-fire, along with Islamic State group.

The journalists were traveling in armored trucks provided by the Russian military, and were escorted by Russian special forces.

Reporters were walking across the village and talking to locals when the first shell struck a hillside a few hundred meters away. Russian officers yelled at journalists to lie down, and they ducked as more shells fell and landed closer to the group. A Russian armored personnel carrier rushed forward to screen the reporters from direct hits. No casualties were reported.

The partial cease-fire, which began at midnight Friday, has brought a notable reduction in hostilities for the first time in the five-year war that has killed more than 250,000 people and displaced half of Syria's population.

Yet the truce has remained fragile, with violations reported in many areas and the opposition and the Syrian government blaming each other. Russia's defense ministry said on Tuesday the cease-fire has been violated 15 times in the past 24 hours.

Before their trip to Kinsibba, reporters visited the nearby village of Ghunaymiyah, where residents recently began returning to their homes after the government last month captured the village from Nusra Front fighters.

Most of the buildings in Ghunaymiyah are just concrete shells, with windows and doors missing.

One resident, Musa Magardish, stood in shock in front of his ruined home. "I don't have any money for rebuilding my house, and I have no idea how I can do it," he said.

Just across the street from his house, dozens lined up in front of a Russian military truck to receive food aid including canned meat, beans and other staples.

"I have a big family, there are seven of us, we feel grateful for that," said Nabila Chine, as one of her daughters stood next to her, smiling.

Konashenkov said Russia has delivered around 580 tons of food aid to government-held areas since it began airstrikes in support of Syria's government in September 2015.

At the village's church, which was damaged in the fighting, a few people gathered to clean up the shards of glass and pieces of concrete littering the floor, before praying.

One of the parishioners, Farah Arijan, said Nusra Front militants badly damaged the church when they captured the village in 2012. "They also killed many of our people, one woman was killed when she was trying to flee," he said.