Russia's ambassador to Turkey dead after shooting at art exhibit 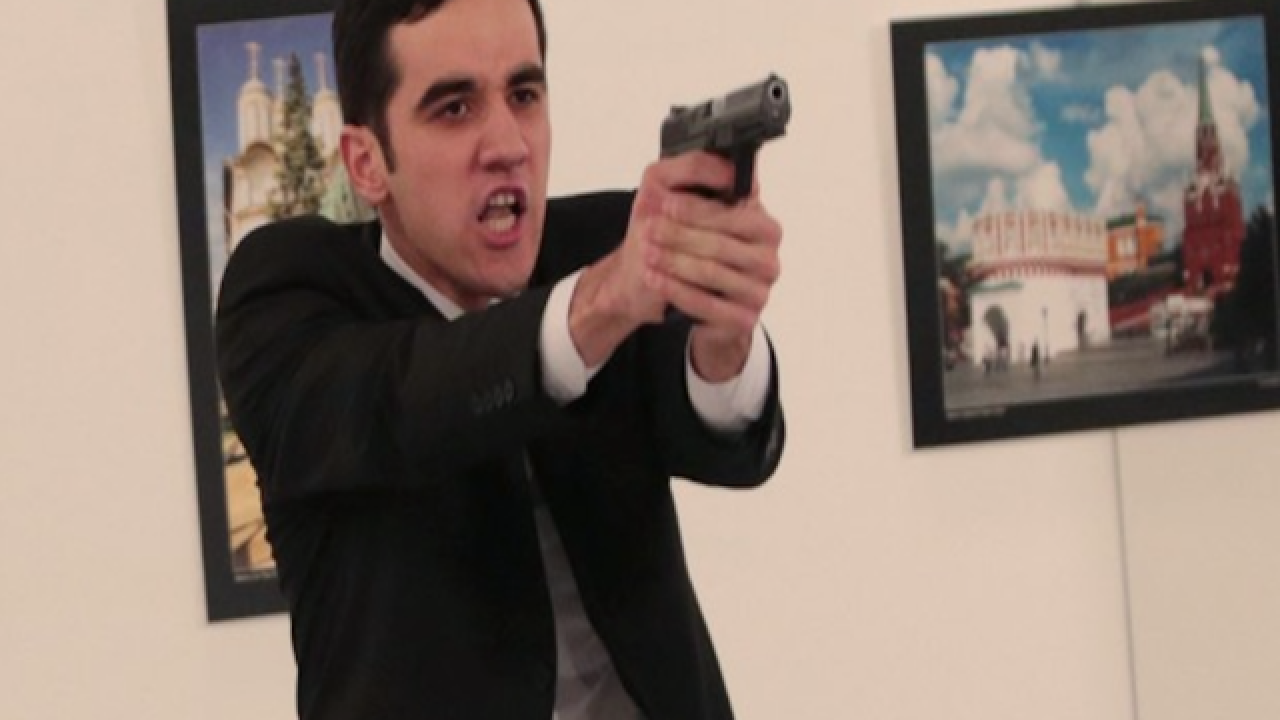 CNN
&lt;p&gt;CNN posted this image of shooter of Russian ambassador to Turkey at an art exhibit. &lt;/p&gt;

By: CNN
Posted at 11:55 AM, Dec 19, 2016
(CNN) -- Smartly-dressed in a dark suit and tie, he blended in with all the other guests at the modern art center in the Turkish capital -- an upscale neighborhood of luxury hotels and embassies.
But Mevlut Mert Altintas, a police officer who killed Russia's ambassador to Turkey, could handle a firearm with ease.
His first of multiple shots was a direct hit, piercing the back of Andrey Karlov as he spoke about the exhibit -- a series of photographs of his homeland.
The ambassador fell to the floor. Altintas circled his body, visibly agitated as he smashed photos hanging on the wall, said Associated Press photographer Burhan Ozbilici, who witnessed the killing and took a chilling series of images.
Turkey's Interior Ministry said 22-year-old Altintas had been "neutralized," without giving further details. A police officer for two and a half years, he had been part of the country's riot squad.
He'd attended police vocational school after graduating from high school in Soke, a city in Western Turkey. It's not clear if he was on or off duty when he pulled trigger.
His father, sister and mother have all been detained and his home is being searched, CNN correspondent Muhammad Lila reported.
What was shooter's motive?
There's no clear motive or claim of responsibility for the attack, which was recorded real time in photos and video that quickly spread worldwide.
"He knew it was going to be filmed and have consequence well beyond this room," said Juliette Kayyem, a CNN national security analyst and Harvard lecturer.
After firing multiple rounds, the gunman shouted: "Allahu akbar (God is greatest). Do not forget Aleppo! Do not forget Syria! Do not forget Aleppo! Do not forget Syria!"
"Only death will remove me from here. Everyone who has taken part in this oppression will one by one pay for it," he said.
Russian President Vladimir Putin said that the crime was a "provocation designed to spoil" relations between Russia and Turkey and derail the peace process in Syria.
Russia is the most powerful ally of the Syrian regime, which has been engaged in fierce battles to take rebel-held parts of in Aleppo.
It has carried out airstrikes in Syria since September 2015 to prop up the embattled leader President Bashar al-Assad. Russia has also used its United Nations veto powers to block a political solution to end the war.
Impact on relations?
The attack also comes at a time of improving ties between Turkey and Russia -- relations that hit an all-time low after Turkish forces shot a Russian warplane out of the sky near the Syrian border in November 2015.
Leaders of both countries vowed to not let the assassination cast a shadow over that friendship.
"I describe this attack on Russia's embassy as an attack to Turkey, Turkey's state and nation," said Turkey's President Recep Tayyip Erdogan.
"After the [attack on the Russian ambassador], during the talk with Mr. Putin, we agreed this is a provocation and there isn't any dispute," he added.
Turkish officials say they are looking to see if Altintas had ties to the Gulenist movement that Turkey has blamed for a coup attempt earlier this year, said CNN 's Lila.
Turkey has demanded the extradition of exiled cleric Fethullah Gulen, a former Erdogan ally who has been in self-imposed exile in Pennsylvania since 1999.
"It's going to be very diplomatically delicate," said Jill Dougherty, a CNN contributor and former CNN Moscow bureau chief.
The-CNN-Wire
™ & © 2016 Cable News Network, Inc., a Time Warner Company. All rights reserved.
WPTV