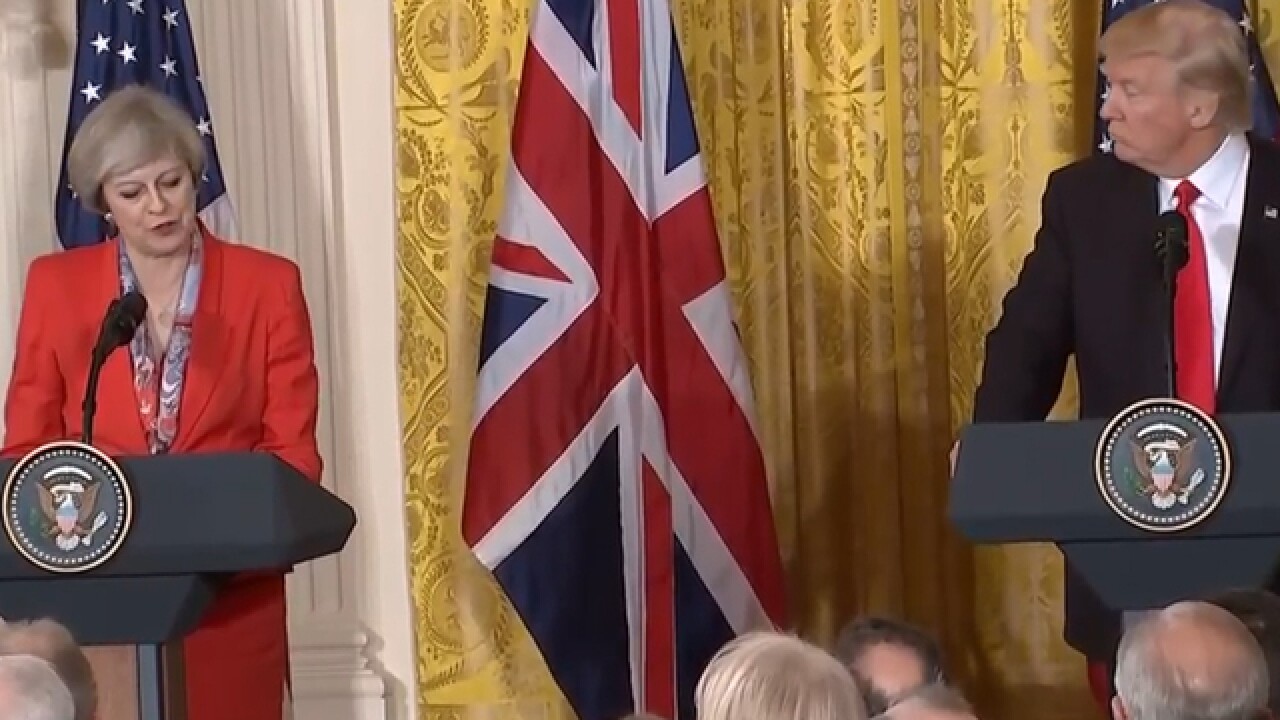 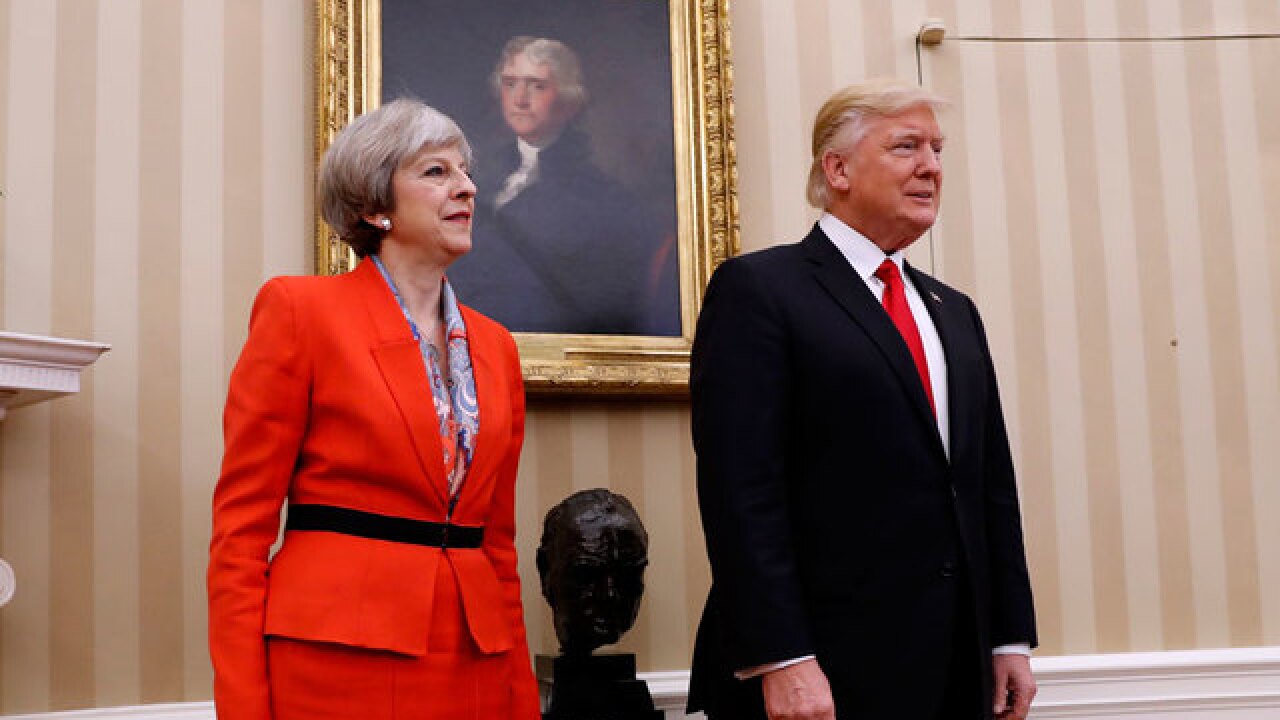 WASHINGTON (AP) — President Donald Trump on Friday pledged America's "lasting support" to the U.S.' historic "special relationship" with Britain after he emerged from his first meeting with British Prime Minister Theresa May, leader of an ally who seeks to nudge the populist president toward the political mainstream.

May, who said the meeting was the start of building a gave the two a chance to build a relationship, announced that Trump had accepted an invitation from Queen Elizabeth II for a state visit later this year with his wife, first lady Melania Trump.

Trump sought to charm May, noting during his first news conference as president that, "by the way, my mother was born in Scotland."

"I am honored to have the prime minister here for our first official visit from a foreign leader," Trump said, standing alongside May in the ornate White House East Room. "This is our first visit so, great honor."

He added that the United States and the United Kingdom have "one of the great bonds."

"We pledge our lasting support to this most special relationship," Trump said during brief opening remarks. "Together, America and the United Kingdom are a beacon for prosperity and the rule of law."

May thanked Trump for inviting her to visit so soon after his inauguration last Friday and said their meeting was an indication of the strength and the importance of maintaining good relations between the trans-Atlantic allies. She said there was "much on which we agree."

"Today's talks, I think, are a significant moment for President Trump and I to build our relationship," May said.

The Trump-May meeting came a day after Mexican President Enrique Pena Nieto called off his own trip to Washington next week amid wrangling over who will pay for Trump's planned wall along the U.S.-Mexico border.

Trump's spokesman said the president would seek a 20 percent tax on Mexican imports to pay for the barrier, then later clarified that such a tax would be a possible approach.

May's meeting with the president is being hailed by the British government as a sign that the trans-Atlantic "special relationship" is valued by the new administration.

Before answering questions from a few journalists, Trump welcomed May to the Oval Office where he promptly showed off a bust of Winston Churchill, one of her predecessors.

"It's a great honor to have Winston Churchill back," Trump said. The bust had been moved from the Oval Office to another part of the White House when Barack Obama held the office.

Trump and May were seen holding hands briefly as they walked along the White House colonnade before the news conference. Afterward, they resumed their talks while dining in the State Dining Room on iceberg wedge salads, braised beef short ribs and salted caramel creme brulee.

May's visit, so soon after Trump's inauguration, has been criticized by her political opponents, and risks being overshadowed by the flood of announcements, plans and proposals coming out of the White House. On Thursday, May was repeatedly asked about Britain's stance on torture — the U.K. has condemned it — after Trump said he thinks torturing terrorism suspects works.

Trump is something of a mystery to world leaders, many of whom expected Democrat Hillary Clinton to win the election. They also don't know his administration's main interlocutors with foreign governments, including son-in-law Jared Kushner and senior adviser Steve Bannon, a conservative media executive.

So May is a bit of a scouting party — or guinea pig — among global politicians.

She has strong reasons for wanting the relationship to work. Britain is set to leave the European Union and its 500 million-person single market. A trade deal with the U.S., Britain's biggest export market, is a major prize.

Trump has drawn parallels between Britain's choice to leave the EU and his own success, using the Brexit vote to bolster his derision of the 28-nation bloc and his preference for striking bilateral agreements.

That puts May in an awkward spot. She wants a good relationship with Trump, but does not share his disdain for the EU, saying it's in Britain's interests that it succeed.

Trump and May both addressed a Republican retreat Thursday in Philadelphia, though their visits did not overlap. During his remarks to lawmakers, Trump bemoaned the fact that Wilbur Ross, his nominee to be commerce secretary, would not be confirmed in time for a visit that was expected to focus heavily on trade.

May's speech alternated between saluting Trump's vision for what she called American "renewal" and reminding him, and his Republican colleagues, of the United States' global responsibilities.