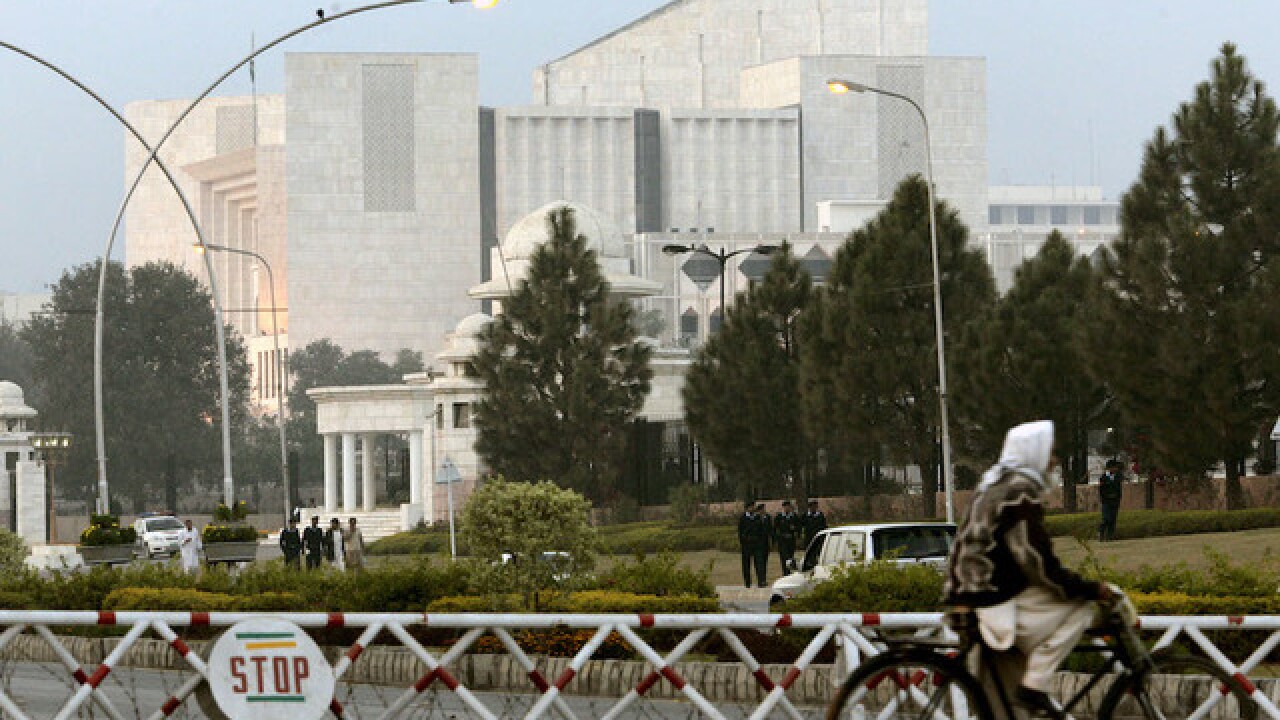 Copyright Getty Images
&lt;p&gt;A man on a bicycle rides past a police barricade near the Supreme Court on November 22, 2007 in Islamabad, Pakistan. &lt;/p&gt;

A court in Pakistan has issued an arrest warrant for a prominent journalist over an article he wrote in May, stoking concerns about diminishing press freedoms following a military-led crackdown on the media during elections earlier this year.

Cyril Almeida, an editor and columnist at one of Pakistan's most respected English-language dailies, is accused of treason for a story filed in May 11, 2018, in which former Prime Minister Nawaz Sharif was quoted speaking out against Pakistan's handling of the 2008 Mumbai Terror Attack in India.

In a statement Monday the Lahore High Court said Almeida had been summoned three times to appear before the bench but had failed to make an appearance. As a result, it was "left with no option" other than to issue a non-bailable arrest warrant.

The court also ordered Almeida's name to be placed on Pakistan's Exit Control List (ECL), preventing him from leaving the country.

In Almeida's May interview with Sharif, the former prime minister appeared to reinforce the claim that Pakistan was behind the 2008 Mumbai Attack due to the use of non-state actors, a claim made constantly by India but one which Pakistan's military and government has vehemently denied.

More than 160 people were killed in the November 2008 attack on the Indian financial capital when 10 gunmen laid siege to several buildings including the Taj Mahal Palace and Tower and Oberoi-Trident hotels, the city's historic Victoria Terminus train station, and the Jewish cultural center, Chabad House.

The quote by Sharif that led to the case being filed, stated that "militant organizations are active in the country (Pakistan). Call them non-state actors, should we allow them to cross the borders and kill 150 people in Mumbai?"

The Lahore High Court also summoned Sharif and former Prime Minister Shahid Khaqan Abbasi, for discussing with Sharif details of a National Security Council meeting held regarding the implications of the interview. Both have been summoned on charges of treason relating to the article.

Almeida's newspaper Dawn stands by the story, and the accuracy of the quote. An editor's note on the newspaper's website Monday questioned the timing of the summons. "The notice served on Cyril Almeida was delivered at Dawn's Islamabad bureau in the middle of last week, and journalists and officials at the bureau say the earlier two notices were never delivered."

Almeida was previously placed on the ECL in 2016 for reporting on fraught civil military relations in Pakistan at the height of a dispute with India over militancy in the disputed region of Kashmir.

On Monday, Almeida took to Twitter posting: "Spoke to the lawyer, there is a warrant, am back on the ECL and will have to appear before the court on Oct 8... how's your Monday been?"

CNN has been unable to contact Almeida in the days since.

Groups supporting press freedom have condemned the move, with the Human Rights Commission of Pakistan (HRCP) labeling the court's decision "regrettable" and an "excessive measure."

"The ease with which Mr. Almeida's interview with the former prime minister was perceived as an attempt to allegedly defame state institutions...only serve to further choke press freedoms in Pakistan," said the organization in a statement Monday night, adding that journalism was not a crime, and was "most certainly not treason."

Earlier this month in a highly critical report on press freedoms in Pakistan, the Committee to Protect Journalists (CPJ) called out the growing infringement on civil liberties in Pakistan, which it blamed on the country's military and other powerful institutions.

They have "established lines of control to stifle the press, by promoting people and issues considered favorable, and limiting the dissemination of content found objectionable," said the CPJ of the military.

TV channels, newspapers and social media have faced increasing levels of censorship both in the run up to July's general elections and in the months after.

During the elections, journalists from Dawn were routinely singled out for intimidation and harassment and vendors were banned from distributing the newspaper in some areas.

Almeida is expected to appear before court on October the 8th, 2018.

A statement in Dawn, Monday, said that Almeida had "no immediate plans to travel abroad" and would "attend the proceedings of the case whenever desired by the honorable court."

The statement urged the court to withdraw the non-bailable warrants and the remove Almeida's name from the no-fly list.