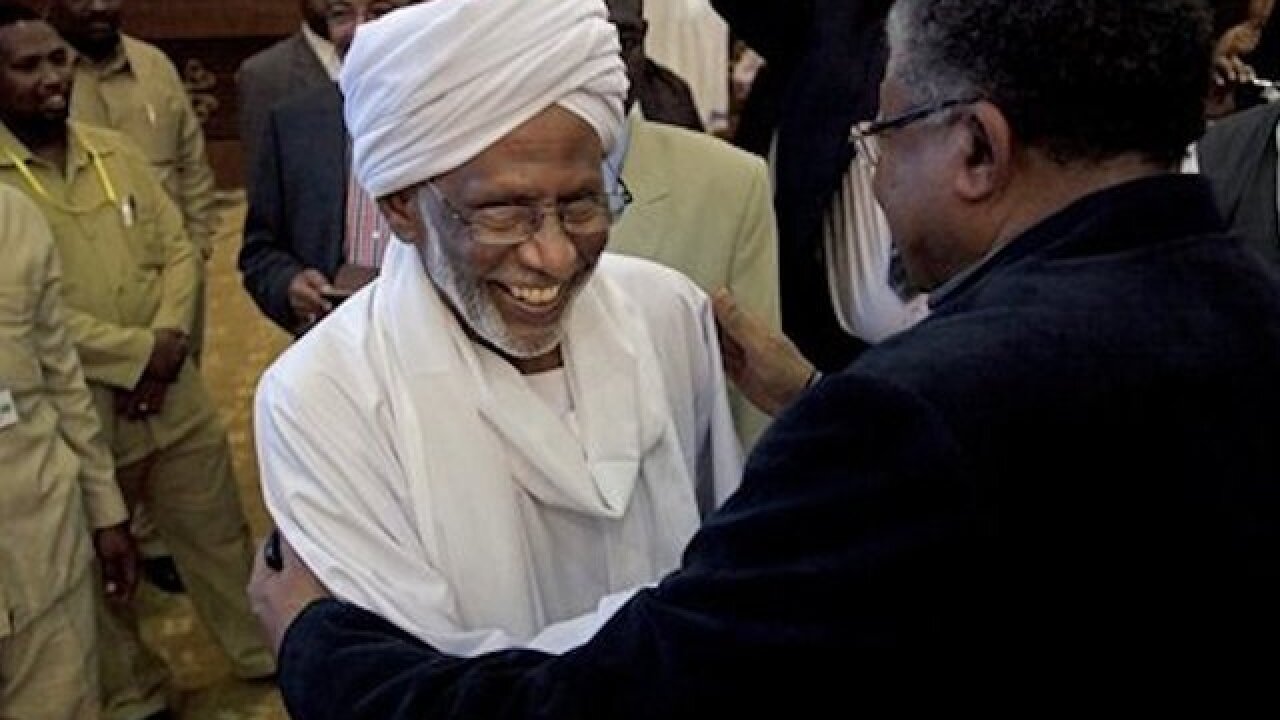 KHARTOUM, Sudan (AP) — Hassan al-Turabi, the Sudanese Islamist who played a key role in the 1989 coup that brought President Omar al-Bashir to power and who once hosted Osama bin Laden, died Saturday at the age of 84.

Al-Turabi championed radical Islam in the 1990s, inviting bin Laden and his deputy Ayman al-Zawahri to Sudan, which became a safe haven for jihadists. He once called the United States the "incarnation of the devil" and hailed bin Laden as a hero.

But Sudan expelled al-Qaida under U.S. and international pressure in 1996, and al-Turabi later remade himself as a mainstream politician.

Al-Bashir dismissed him as parliament speaker after he backed legislation aimed at curbing the president's powers in 1999, and he went on to form the opposition Popular Congress Party and support rebels in southern Sudan and Darfur. Al-Turabi was jailed on a number of occasions and spent more than two years under house arrest from 2001 to 2003.

Born the son of a religious judge in 1932 in the northeastern state of Kassala, al-Turabi was a lifelong scholar of Islam. The oft-smiling, soft-spoken cleric was among the few Islamic scholars to argue that Muslim women could marry Christian or Jewish men.

Al-Turabi obtained a law degree at the University of Khartoum, and later studied in the U.K. before obtaining a Ph.D. from the Sorbonne in Paris in 1964. In addition to Arabic, he was fluent in English, French, and German.

He had joined the Muslim Brotherhood in Sudan, rising to become their leader in 1969, but the group was dissolved following a military coup that year which brought Jaafar al-Nimeiri to power.

Al-Turabi reconciled with the strongman in 1977, and al-Nimeiri awarded the politically savvy ideologue the post of attorney general two years later.

The two began to introduce Islamic law in the 1980s, but al-Turabi did not fully succeed in securing the implementation of Shariah until al-Bashir came to power in a coup that was supported by the scholar's influential National Islamic Front, which went on to enforce the new regulations.

Al-Turabi "led the creation of the NIF police state and associated NIF militias to consolidate Islamist power and prevent a popular uprising," the rights group said.

He was also an avid supporter of jihadists. In a 1998 interview with The Associated Press, al-Turabi said the U.S. Embassy bombings in Kenya and Tanzania that year were "understandable."

"Anyone who resists power or persecution -- if you like him, you call him ... a freedom fighter, a revolutionary," al-Turabi said. "It's only when you don't like him you use another language, that he's a terrorist."

Al-Turabi later adopted a more moderate stance, presenting himself as an opposition leader in favor of democratic change and a supporter of peripheral communities in the massive east African state.

But he was tarnished in the eyes of many by his past support for two military dictators, and has been a marginal figure in protest movements that have emerged in recent years calling for political change.

Many of Sudan's liberals hold him at least partly responsible for the strict Islamic restrictions that govern the country to this day, and which limit personal freedoms.

He passed away at the Royal Care International Hospital in the capital, Khartoum. He was brought to the hospital's intensive care unit early on Saturday after losing consciousness at his office. He died of cardiac arrest, state TV said, citing an obituary from the presidency.

Sudanese state TV stopped its regular programming to air a recitation of the Quran in mourning, while crowds rushed to al-Turabi's home to offer their condolences. In keeping with Islamic customs, he will be buried early Sunday morning.