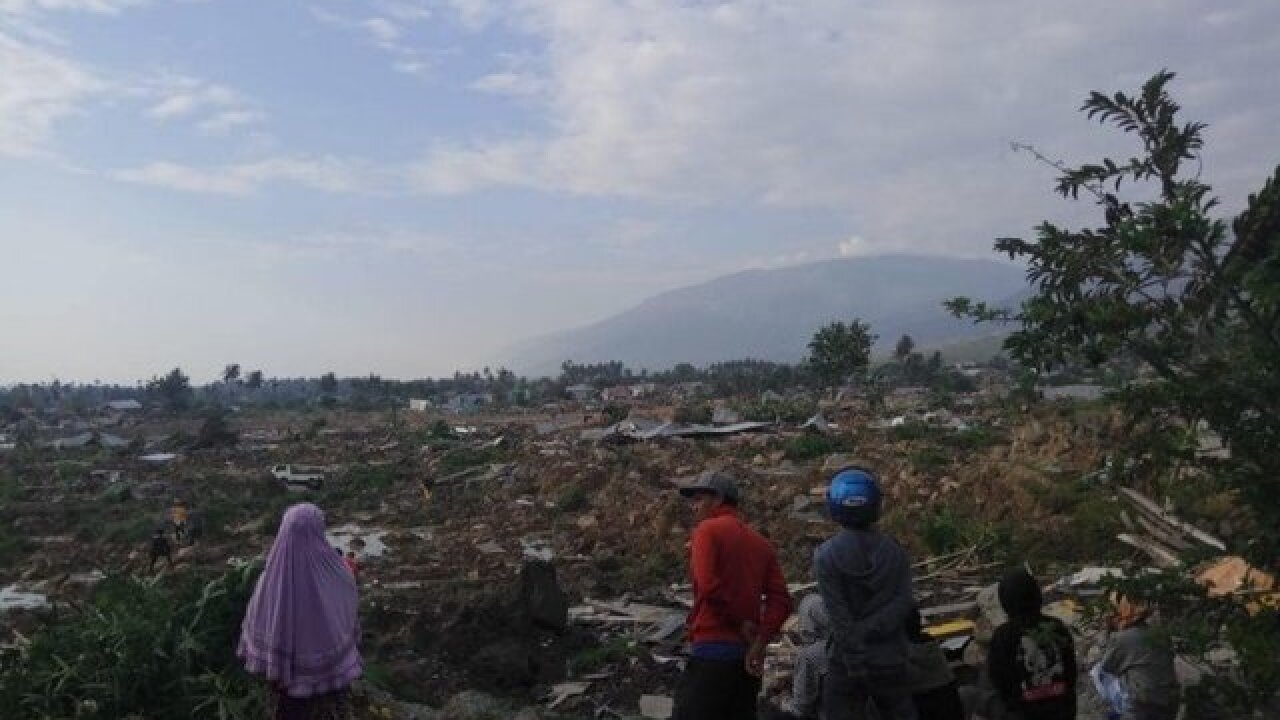 (CNN) -- Desperation is growing in the stricken Indonesian city of Palu as residents faced a fifth day with little food or clean drinking water and the official death toll mounted in the wake of Friday's devastating earthquake and tsunami.

The number of people killed had risen to 1,234 on Tuesday, Indonesia's national disaster agency said, including Monday's grim discovery of 30 bodies, mostly children, in a church recreation hall in Sigi Biromaru south of Palu.

Local Red Cross worker Rafiq Anshori told CNN the bodies were discovered during the search for 86 children who were taking part in a bible camp in the remote location when the earthquake and tsunami struck the island of Sulawesi.

Ashori said volunteers had to carry the bodies down from the church by hand for over an hour before they could reach a place where police could pick them up. The rest of the children from the bible camp are still missing.

The number of deaths is expected to grow as more bodies are retrieved from the rubble. "So many bodies haven't been recovered yet," Willem Rampangilei, head of Indonesia's National Board for Disaster Management, told reporters Tuesday.

The situation for survivors is dire as families scramble to get even the most basic of goods. On Tuesday, hundreds waited in line in the blazing sun, standing in the ruins, in the hopes of obtaining a small amount of fuel.

At the last working gas pump in town, crowds gathered around a single, overworked attendant. He held a large wad of cash almost too big to grip, the product of hours spent pumping fuel into portable cans.

But money is of little use when there is nothing left to buy. All normal services in the city have ceased to operate. Shops have been destroyed or left empty.

Roads to Palu -- a city of about 350,000 people -- remain partially blocked, and aid has trickled in. Indonesian vessels carrying food and water have yet to arrive.

According to officials at the military headquarters in Palu, at least 3,500 officials and volunteers have joined in to help out with the recovery, including 900 police and more than 1,000 military personnel.

The search continues for survivors, with reports of more than 700 houses buried under a mudslide in a nearby town.

An official from the International Federation of the Red Cross and Red Crescent described the situation as "nightmarish."

Five days after the first tsunami waves crashed into Palu, bodies remain unburied on the sides of roads. In a public cemetery on the city's outskirts, workers are digging a mass grave the size of a soccer field to bury as many as quickly as possible.

Almost 200 bodies have been placed in the pit, with more being added by the hour. A few identification cards lie on the ground nearby, but workers said not all bodies were being identified before being laid to rest.

'I needed to get the kids out of here'

An estimated 2.4 million people have been affected by the disaster, according to Sutopo Purwo Nugroho, a spokesman for the National Board for Disaster Management.

Desperate to leave the disaster scene and escape the threat of looting, thousands of families, many with children, have lined up at Palu's airport in hopes of getting out.

"People are trying to get stuff from my house so I needed to get the kids out of here. ... They're trying to rob us," one woman told CNN as she waited at the airport Monday.

Meanwhile, international aid organizations and the Indonesian military are trying their hardest to reach those in need.

Vanda Lengkong, regional head of disaster risk management at Plan International, told CNN that she'd seen people begging on the road for food and water in the Donggala area near Palu.

"We were able to see extensive damage (especially on the coastline), with very few buildings ... left standing and electricity poles collapsed," she said.

Lengkong said she had seen children without parents playing close to the ruins in Palu. "It's something that Plan International is trying to identify, the specific needs of boys and girls and how we can fill in the gap," she said.

Pallets are en route to the affected area, with the Red Cross sending seven tons of logistical supplies from Jakarta on Tuesday.

Other countries have begun to announce aid packages. Australia, one of Indonesia's closest neighbors, said it had already provided $500,000 of support immediately through the Indonesian Red Cross.

"Australia has some expertise and has resources in particular areas we can deploy, and we are looking to see how we can best fit the need," Australian Prime Minister Scott Morrison said Tuesday.

The United States announced Monday it had released $100,000 in initial disaster assistance, according to a State Department spokesman.

But on the ground, there's little evidence so far of the pledged aid, with shipments expected to take days to arrive.

On Tuesday morning, there was another reminder of the constant threat of seismic activity in Indonesia when a 6.0-magnitude earthquake shook the island of Sumba in the east.

Video from close to the epicenter showed panicked residents and schoolchildren fleeing from buildings and homes. There have been no reports of injuries, and the tremor did not trigger a tsunami alert.

Indonesia sits between two continental plates on what is known as the Ring of Fire, a band around the basin of the Pacific Ocean that leads to high levels of tectonic and volcanic activity.

Sumba is to the east of the Indonesian island of Lombok, where at least 400 people were killed in August after a series of devastating quakes.

Palu is continuing to experience aftershocks.

Survivors are still avoiding buildings and are sleeping outside, afraid of what will happen if there should be a severe aftershock.

Outside the city's Undata Hospital, patients slept under tarpaulins in the sweltering heat, with some of the injured covered in flies. The hospital's director, Dr. Komang Hadi Sujendra, said power had just been restored Monday.

Plan International's Lengkong said people were "concerned and confused" following the earthquake, and unsure whether they were safe from aftershocks. "(Do) they need to go to the mountains, or can they go home? Is it going to happen again, or can they stay?"