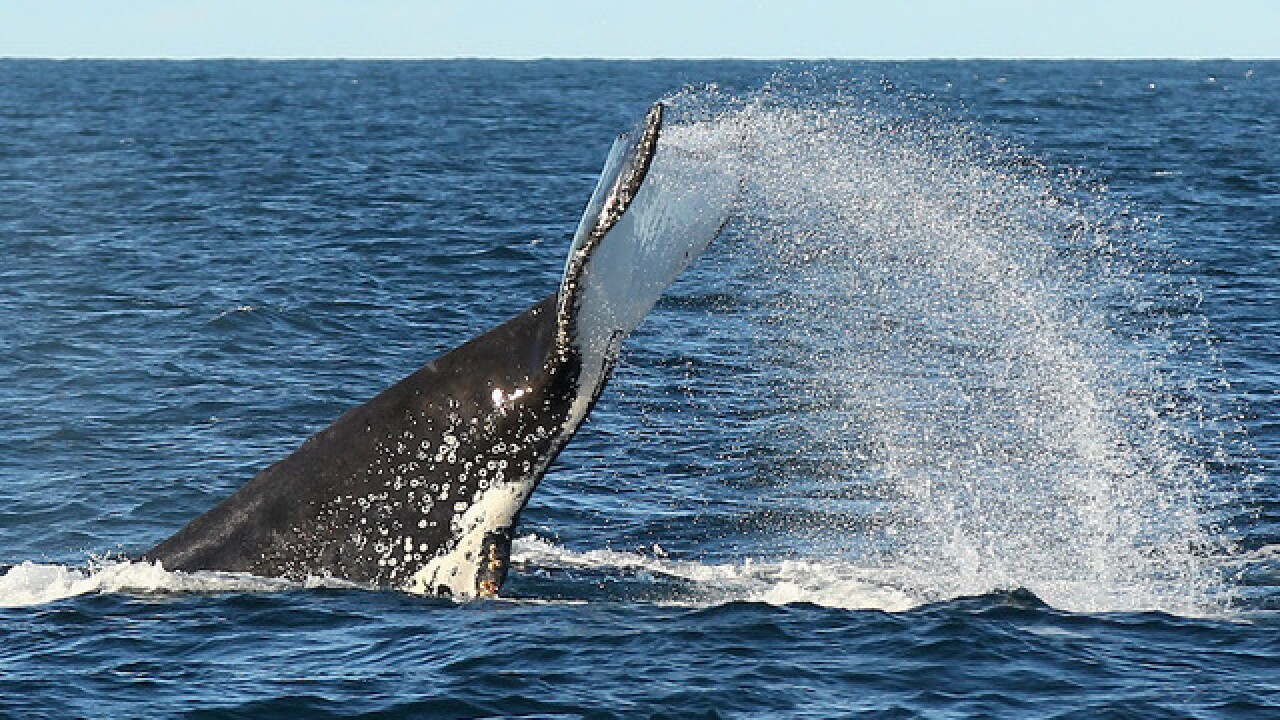 Image copyright 2018 Getty Images. All rights reserved. This material may not be published, broadcast, rewritten, or redistributed.
&lt;p&gt;A humpback whale is seen at the beginning of whale watching season during a Manly Whale Watching tour on June 23, 2011 in Sydney, Australia. &lt;/p&gt;

Footage from the scene taken by Nine News shows the enormous whale thrashing in the water Monday, further entangling itself in the yellow lining of the net as it attempted to escape.

A team of marine rescuers from the Queensland Boating and Fisheries Department managed to get close enough to the whale, while in a small rubber dinghy, to cut away the net.

After more than one hour, staff from Sea World in a nearby boat pulled the net off the whale, allowing it to swim away.

Sea World Director of Marine Sciences Trevor Long said it had been "quite a delicate rescue."

"What Queensland Boating and Fisheries did was a very good job, they attacked it, started at the head of the animal, worked their way back. We were fortunate just to be there at the end, just to pull the net off," he said.

Shark nets are placed around 85 beaches in Queensland, in an effort to "reduce the possibility of a shark attack for swimmers," Queensland Boating and Fisheries Patrol Shark Control Program Manager Jeff Krause said in a statement.

However, he acknowledged that whales do often get entangled in the nets. "This is the fourth whale that has been caught in shark nets this migration season," he said.

Surveillance cameras are mounted at beaches to alert rescuers if a whale becomes trapped.

"Seventeen surveillance cameras, strategically positioned adjacent to shark nets at the Gold and Sunshine Coasts and Rainbow Beach, will again continue during the 2018 whale migration season," Krause said in the statement.

The whale is one of around 30,000 that make their annual 10,000 kilometer (6,231 miles) migratory journey between Antarctica and Queensland each year.

As humpback whales regularly propel themselves out of the water and dive back in, they become easily tangled in the shark nets laid near the shore.

"You could have whales, dolphins, turtles -- a whole range of animals caught," Long said. "These shark nets are indiscriminate killers."