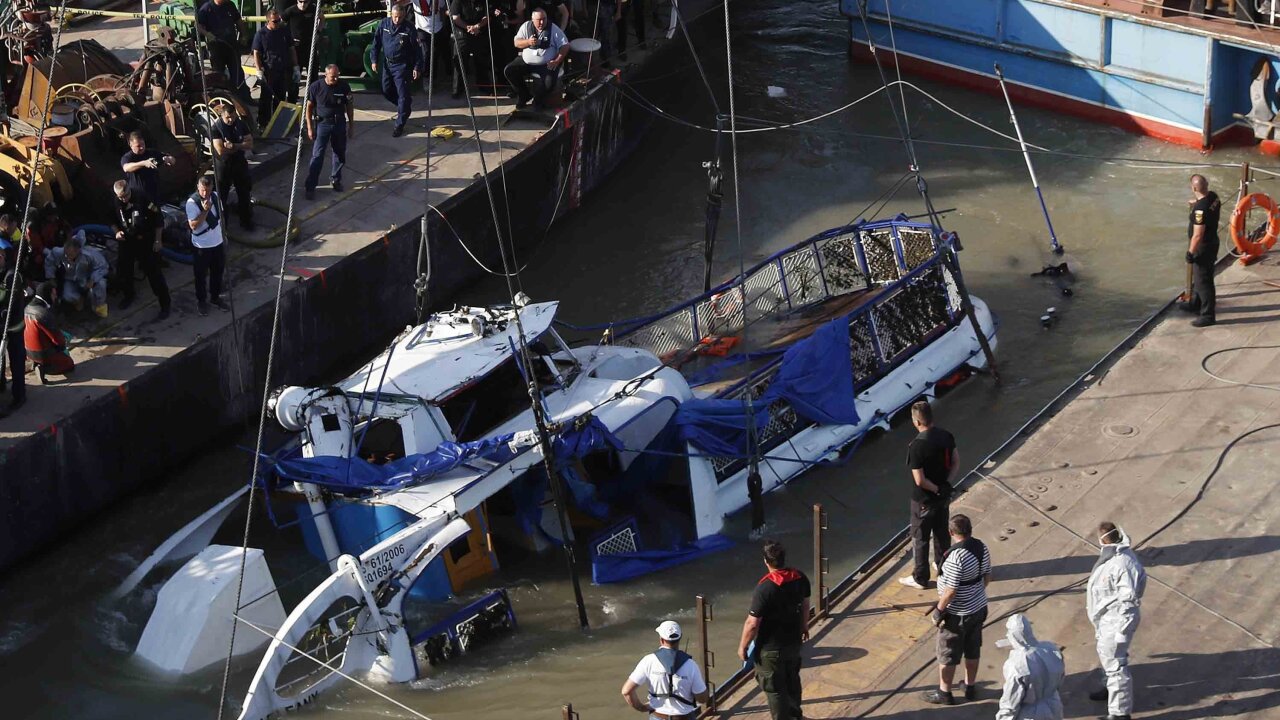 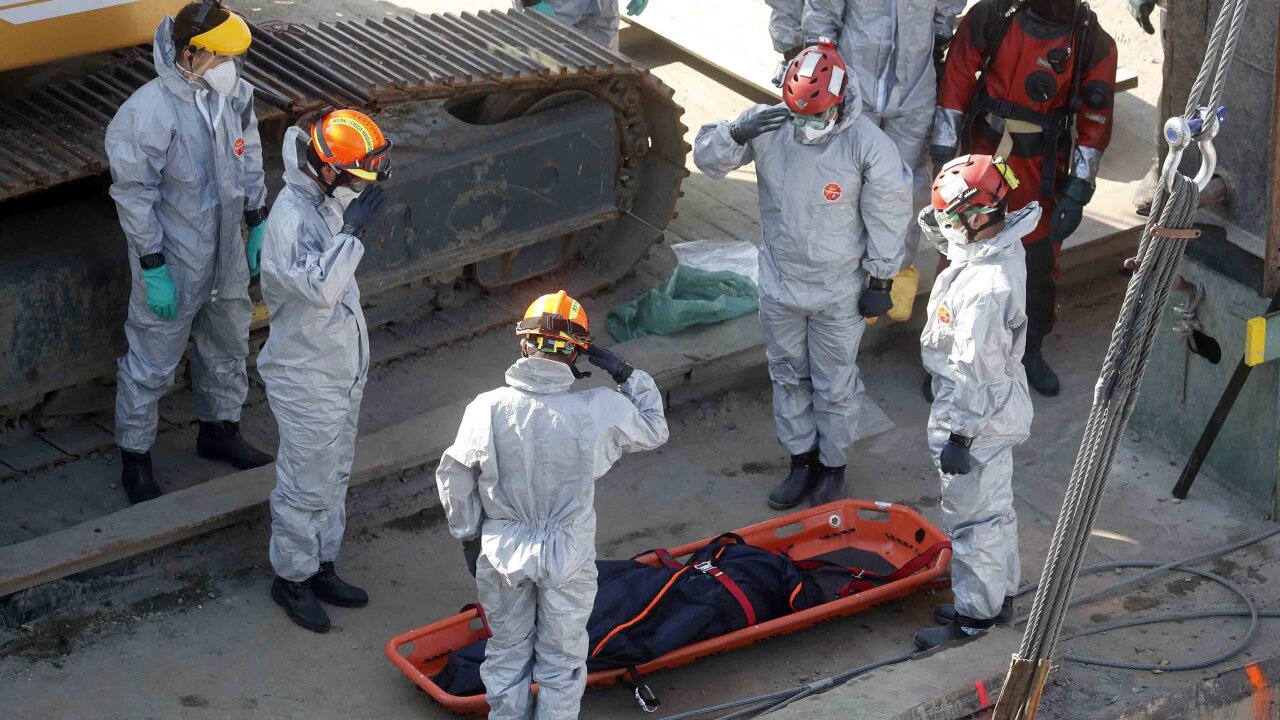 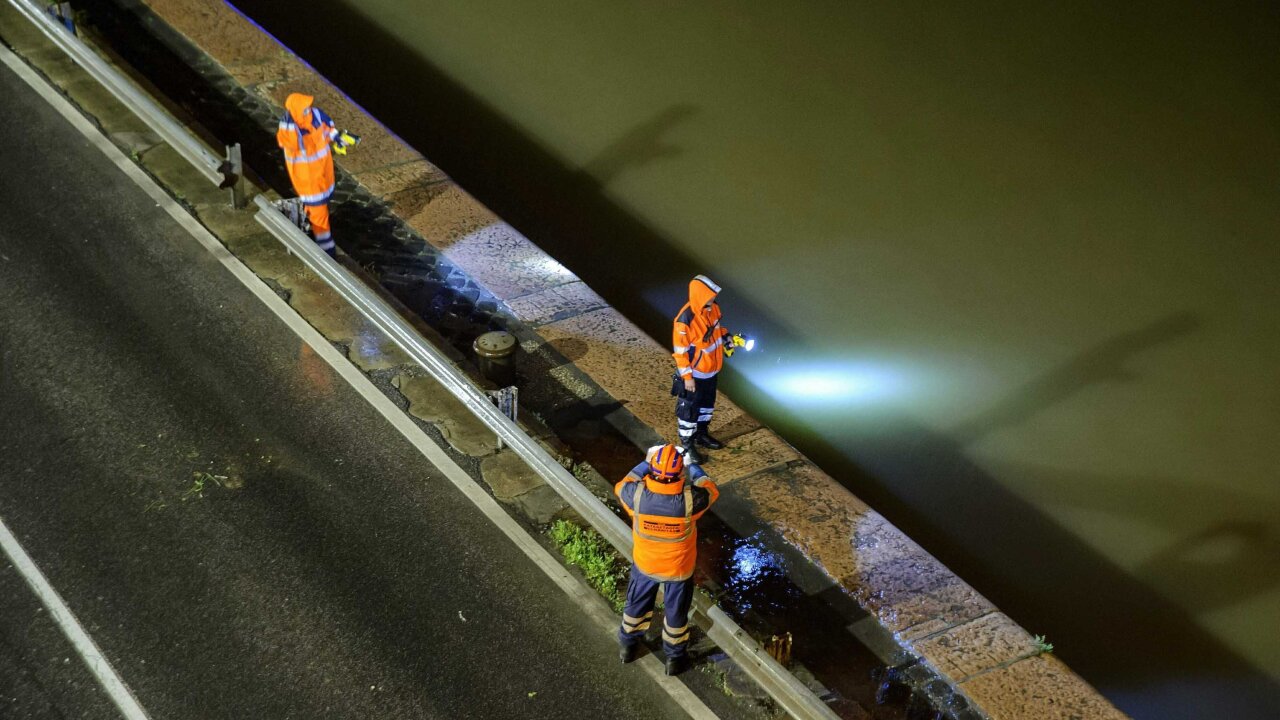 (CNN) -- Four bodies have been recovered from the sightseeing tourist boat which collided with a larger vessel and sank in Budapest two weeks ago, as it was finally lifted out of the River Danube on Tuesday.

The wreck will now be taken to an island in the river for further investigation by city authorities, a media officer for Hungary's Counter Terrorism Center (TEK) said.

Thirty-five people -- including 33 South Koreans -- were on board the boat in the Hungarian capital when it collided with another ship on May 29. The retrieval of the four bodies Tuesday takes the death toll until at least 24. Four passengers remain missing, the TEK media officer said.

The collision occurred in the city center and according to Hungarian police, the sightseeing vessel -- called The Mermaid -- flipped and sank in just seven seconds.

Seven passengers were rescued from the river and taken to hospital following the accident, and a further seven people were confirmed dead that night.

In the following days, three bodies were recovered from the site and 10 more were located downstream -- some found as far as 97 kilometers (60 miles) south of Budapest due to the river's strong currents.

At 1,770 miles long, the Danube River passes through a total of 10 countries: Germany, Austria, Slovakia, Hungary Croatia, Serbia, Bulgaria, Romania, Moldova and Ukraine. Its depths vary from three to 26 feet.

The captain of the cruise liner which collided with the tourist vessel, a 64-year-old Ukrainian citizen named only as C. Yuriy, was detained and arrested by Hungarian authorities on suspicion of endangering waterborne traffic.

According to a statement on Saturday from Budapest Metropolitan Police, Yuriy "has not given any explanatory statement about the circumstances of the accident during his continuing interrogations."

Lee Sang-moo, the managing director of Very Good Tour -- the South Korean tour company that arranged the river cruise -- said last month that the group was on day five of a nine-day tour of Croatia, Slovakia, the Czech Republic, Hungary, Austria and Germany.

Most of the tourists were middle-aged, Lee added, with the oldest in their 70s and the youngest born in 2013.

"I deeply apologize to the parties affected by the accident, families of victims and the people who are suffering after hearing the news this morning," Lee said. "I understand that the boat took every precaution."

Mihaly Toth, a spokesman for boating company Panorama Deck, which operated the capsized boat, said the company could not confirm why it sank.

"It was just an average day and this was a regular trip. We carry out thousands of tourist boat trips every day, there were no signs that something like this could happen," Toth said.