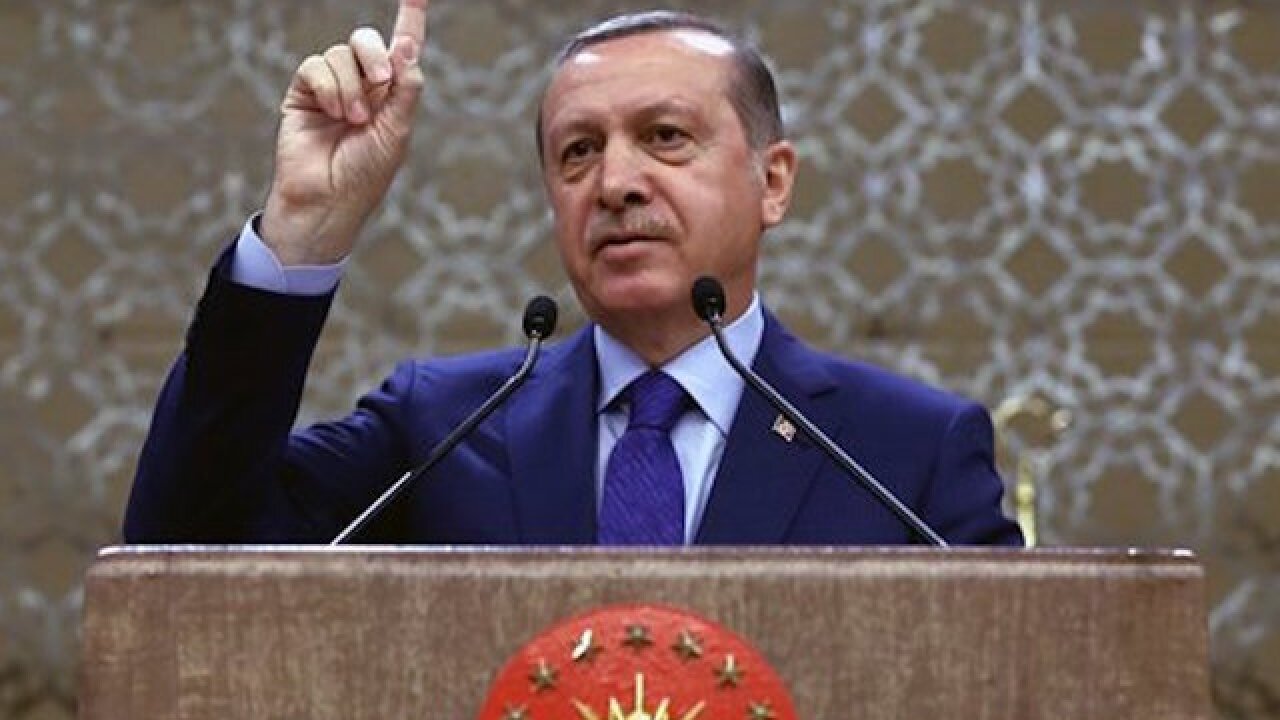 Copyright Associated Press
&lt;p&gt;Turkish President Recep Tayyip Erdogan addresses a meeting of local administrators in Ankara, Turkey, Wednesday, April 6, 2016. Turkey's Justice Minister Bekir Bozdag says the government will work on a regulation that would allow authorities to strip Turks deemed to be supporting terrorism of their Turkish citizenship. Bozdag's comments on Wednesday came a day after Erdogan called for such a measure to strengthen Turkey's fight against terrorism.(Yasin Bulbul/Presidential Press Service, Pool via AP)&lt;/p&gt;

ANKARA, Turkey (AP) — Turkish President Recep Tayyip Erdogan lashed out at Europe on Friday, saying his nation will not reform its anti-terrorism legislation for the sake of visa-free travel to Europe for its citizens.

The EU has called on Turkey to revise its terrorism laws as a condition for allowing Turkish citizens to travel to Europe without visas on short stays.

Erdogan has been pressing for the contrary: a broader definition of terrorism at a time when the country is facing the twin threats of renewed conflict with Kurdish militants in the southeast and growing blowback from the conflict in Syria in the form or IS-linked bombings and rocket attacks.

"The EU at the moment is saying you will change your anti-terrorism law for visas," he said. "You allow terrorists to set up tents next to the European Parliament. Why don't you change your mindset? "

Erdogan was referring to the Kurdistan Worker's Party, which has waged a decades-long insurgency against the Turkish state and is designated by Ankara and its allies as a terrorist organization. Its symbols, Turkish officials say, have been spotted recently at demonstrations and in tents outside the European Parliament.

"You will allow terrorists to set up tents, say you are doing it in the name of democracy, and then tell us to change our terrorism law for visas," said Erdogan.

"We'll go our way, you go yours. Go make your agreement with whoever you can."

His statement came a day after Prime Minister Ahmet Davutoglu, who had negotiated the deal, stepped down over a rift with the president.

The premier's resignation is perceived to the outcome of his divergence with the president on key questions including the possibility of resuming peace talks with Kurdish militants, press freedom, and more crucially, his lukewarm support toward reshaping Turkey into a presidential system.

"In order to be strong, we need to rapidly present a presidential system which is the guarantee of stability and trust to the approval of the people," Erdogan said.