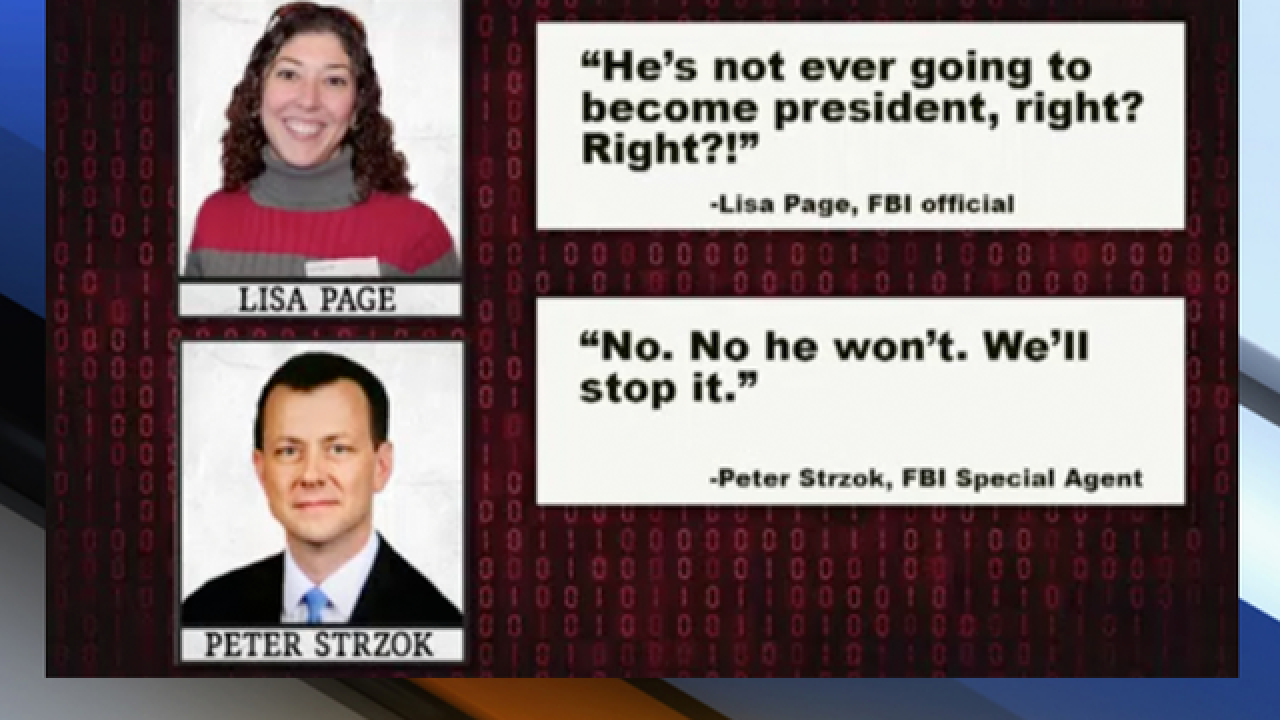 &lt;p&gt;As the FBI investigated both candidates running for president in 2016, two FBI employees exchanged thousands of personal texts and messages that included a running political commentary — including newly released messages in which one of them expressed a desire to "stop" the election of Donald Trump.&lt;/p&gt;

WASHINGTON (AP) — As the FBI investigated both candidates running for president in 2016, two FBI employees exchanged thousands of personal texts and messages that included a running political commentary — including newly released messages in which one of them expressed a desire to "stop" the election of Donald Trump.

In a highly anticipated report released Thursday, the Justice Department's internal watchdog said those messages sullied the FBI's reputation and "cast a cloud" over its investigation into Democrat Hillary Clinton's emails, even if they did not affect the investigation itself. The report, which faulted former FBI Director James Comey for his handling of the probe, also cited anti-Trump communications sent by three other unnamed FBI employees.

The messages between FBI agent Peter Strzok and FBI lawyer Lisa Page — both of whom worked on special counsel Robert Mueller's Russia probe — have also given congressional Republicans ample fodder to criticize the Clinton investigation, which eventually cleared her, and to question the department's ongoing probe into Russian intervention and whether President Donald Trump's Republican campaign was involved. That investigation, now led by Mueller, is also looking into whether Trump obstructed justice.

"Peter Strzok should not have a job anywhere near our Justice Department," said North Carolina Rep. Mark Meadows, a Republican who is close to Trump, after a briefing on the report. The House Judiciary Committee said Thursday they would subpoena Strzok to testify.

Strzok is a respected, veteran counterintelligence agent who helped lead the Clinton investigation. Page was less well-known and has left the agency since the text messages were revealed.

Both Strzok and Page worked on the Clinton probe. Strzok was also assigned to Mueller's team; he was removed from the Russia probe in the summer of 2017 after the department found out about the texts. Page only briefly worked on Mueller's team and left before the texts were discovered.

Texts between the two included their observations of the 2016 election and criticism of Trump. They used words like "idiot," ''loathsome," ''menace" and "disaster" to describe him. In one text four days before the election, Page told Strzok that the "American presidential election, and thus, the state of the world, actually hangs in the balance."

Many of the texts had already been made public after the FBI sent them to Congress. But in a new, inflammatory text revealed in the report, Page wrote Strzok in August 2016: "(Trump's) not ever going to become president, right? Right?!"

The inspector general's report said that exchange "is not only indicative of a biased state of mind but, even more seriously, implies a willingness to take official action to impact the presidential candidate's electoral prospects. This is antithetical to the core values of the FBI and the Department of Justice."

Still, investigators said they did not find "documentary or testimonial evidence" that the bias affected the probe. And Strzok's lawyer, Aitan Goelman, said the report revealed no evidence that the FBI agent's political views affected the handling of the Clinton investigation.

FBI Director Christopher Wray said that "conduct in the report" had already been referred to the department's disciplinary arm, but he would not say which employees had been referred or for what conduct. Page no longer works for the agency.

In interviews included in the report, both Strozk and Page acknowledged that some of their texts could be read as showing their bias against Trump, both during the early stages of the collusion investigation and after Trump assumed office in January 2017.

But both insisted bias played no part in their motivations.

The report describes some of those messages, including one the day after the election in which he lamented the results and said he was "so stressed about what I could have done differently." He also wrote to a colleague, "I just can't imagine the systematic disassembly of the progress we made over the last 8 years." In another message, he called then-Vice President-elect Mike Pence "stupid."

The report also details anti-Trump instant messages between other employees assigned to the Clinton case. In one case, a male agent and a female agent who are now married exchanged messages in which the female agent called Trump's Ohio supporters "retarded" and later messaged, "f--- Trump." On Election Day, the male agent messaged "I'm ... with her," referring to one of Clinton's campaign slogans. The male agent was one of two agents who had interviewed Clinton for the investigation.