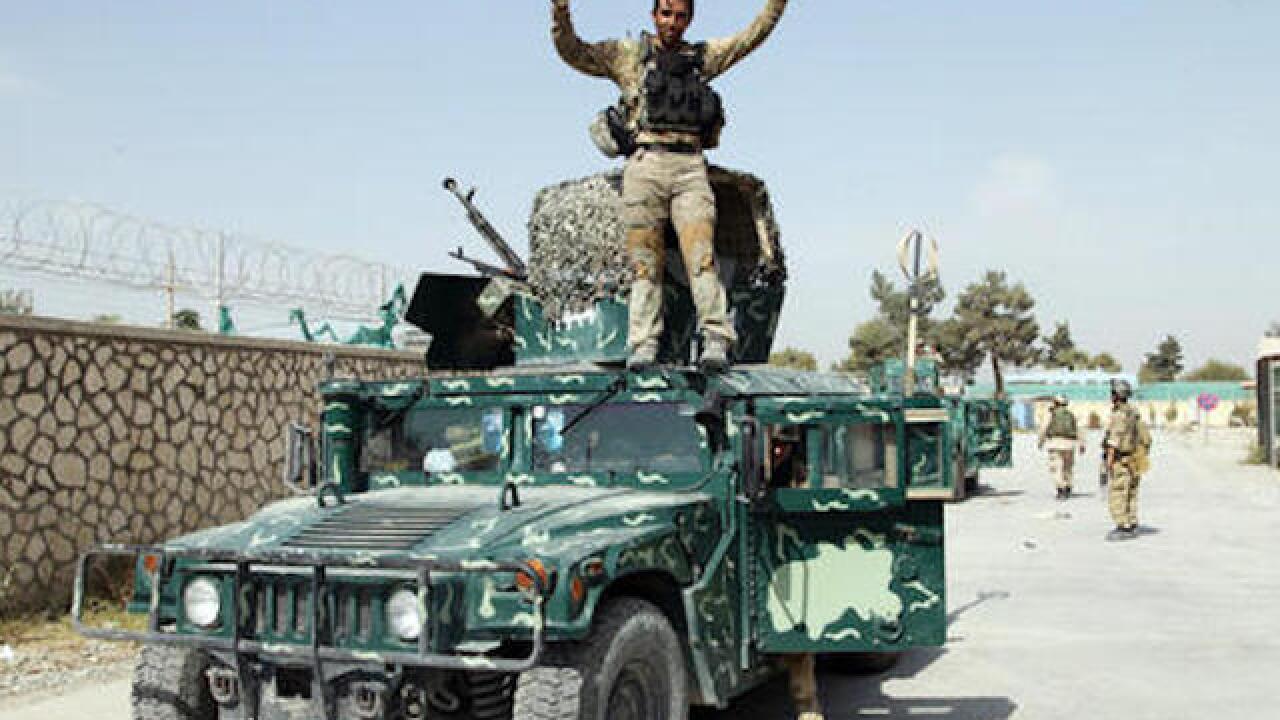 Copyright Associated Press
&lt;p&gt;ADDITION-- ADDS DATE OF ANNOUNCEMENT. FILE -- In this Oct. 2, 2015 file photo, an Afghan soldier raises his hands as a victory sign, in Kunduz city, north of Kabul, Afghanistan. Afghan officials said Tuesday, Oct. 4, 2016, that fierce gunbattles are underway for a second day across the embattled northern city of Kunduz after the Taliban launched a new, multipronged attack on the city. (AP Photo/Dehsabzi, File)&lt;/p&gt;

The Americans killed and four other U.S. troops wounded were among military advisers helping Afghan troops, rare combat casualties for Western forces who handed over the task of securing Afghanistan to local troops some two years ago.

Afghan officials said they were still investigating the attack and its civilian casualties, some of which may have been caused by the airstrikes called in to support Afghan and U.S. troops under fire. Residents later carried over a dozen corpses of the dead, including children, toward the local governor's office in a show of rage a year after American forces attacked an area hospital.

NATO declined to identify the Americans killed, pending notification of their next of kin.

"Our service members were doing their part to help the Afghans secure their own country while protecting our homeland from those who would do us harm," Defense Secretary Ash Carter said in a statement.

The target of the raid were two senior Taliban commanders, who were killed in the fighting along with 63 other insurgents, Kunduz police chief Gen. Qasim Jangalbagh said. He said Afghan special forces carried out the raid and that he did not have any information about NATO involvement in the assault.

Jangalbagh said 26 civilians, including members of the Taliban fighters' families, were killed in the assault.

Kunduz official Mohammad Yousf Ayoubi and parliament member Malim Chari both also told the AP that civilians were killed in the fighting, though they had few details. Dr. Mohammad Naim Mangal, the director of a Kunduz hospital, said his facility received the bodies of a dead man and a child and treated 30 people, including children, wounded in the fighting.

NATO only said it was "aware of the allegations."

In a later statement, Cleveland said that "friendly forces received direct fire and airstrikes were conducted to defend themselves" and an investigation was underway.

He earlier described the assault as "not a common event," without elaborating.

A Taliban statement also said there were civilian casualties while claiming its fighters killed 16 U.S. troops. The insurgents often exaggerate their battlefield successes.

According to defense officials, the U.S. Army soldiers had gotten off a helicopter and were moving on foot with Afghan forces doing clearing operations in Kunduz province. The defense officials said the troops came under fire and returned fire, but it wasn't clear whether it was gunfire or other larger rounds. Two of the U.S. troops were killed and four others were injured. Two of the injured had more serious wounds and were taken away by medevac.

Taliban fighters briefly overran the city of Kunduz, the provincial capital with the same name, in early October, a show of strength by the insurgents that also highlighted the troubles facing local Afghan forces 15 years after the U.S.-led invasion of the country. The Taliban captured and held parts of Kunduz a year earlier as well before the city was fully liberated weeks later with the help of U.S. airstrikes.

Those 2015 airstrikes also saw a U.S. Air Force special operations AC-130 gunship attack a Kunduz hospital run by the medical charity Doctors Without Borders, killing 42 people. Sixteen U.S. military personnel, including a two-star general, later were disciplined for what American officials described as mistakes that led the strike. Doctors Without Borders has called the attack a war crime and demanded an independent investigation.

Yet another airstrike killing civilians could stoke anger among Afghans, and the country's former President Hamid Karzai repeatedly clashed with NATO over them, straining relations.

Afghan President Ashraf Ghani issued a statement criticizing the Taliban for using women and children as "a shield" during the raid. He also announced a local investigation had been started.

Also on Thursday, Afghan officials said a roadside blast struck a group of people on their way to a wedding in the northern Faryab province, killing at least nine civilians and wounding 11. Javed Dedar, a spokesman for the provincial governor, said the bride was among those wounded. It remained unclear if the blast was caused by a roadside mine or mortars fired by militants, and the remote location of the incident made the details difficult to verify.

NATO's combat operations ended in Afghanistan at the end of 2014, a move that put Afghan forces in charge of the country's security. Since then, Afghan forces have suffered heavy casualties battling the Taliban, who have at times overrun provincial capitals before being pushed back. Meanwhile, NATO and U.S. casualties have been few.

The fight in Afghanistan — American's longest war — began after the Sept. 11, 2001 attacks as the Taliban harbored al-Qaida leader Osama bin Laden. The Taliban and Afghan government recently held secret talks to see if they could start peace negotiations to end the fighting, though questions remain over which faction of the insurgency is doing the talking.