20 killed in Aleppo on fifth straight day of intense assault 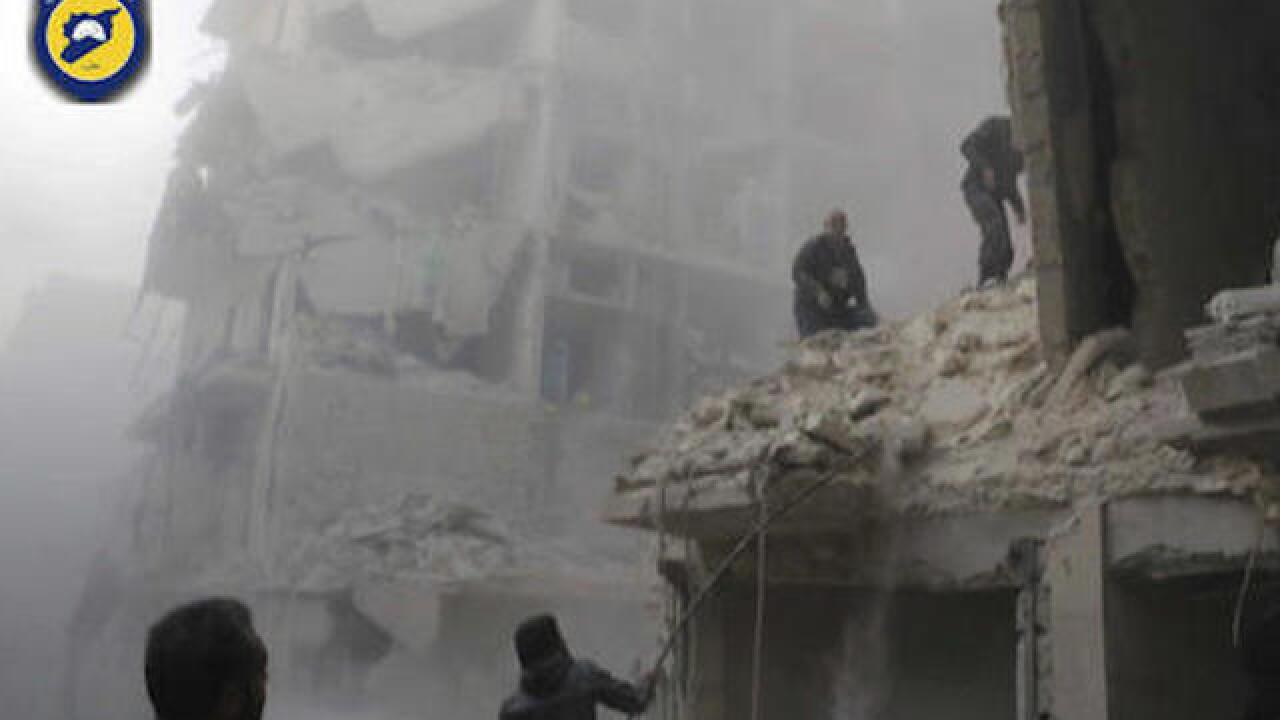 &lt;p&gt;This photo provided by the Syrian Civil Defense White Helmets, which has been authenticated based on its contents and other AP reporting, shows Syrian citizens inspect damage buildings after airstrikes hit the Seif al-Dawleh neighborhood in Aleppo, Syria, Saturday, Nov. 19, 2016. Government bombardment of besieged rebel-held neighborhoods in the northern city of Aleppo killed at least 20 people Saturday Syrian opposition activists said, a day after the health directorate said all hospital in opposition areas have been knocked out of service. (Syrian Civil Defense White Helmets via AP)&lt;/p&gt;

BEIRUT (AP) — Government bombardment of besieged rebel-held neighborhoods in the northern city of Aleppo killed at least 20 people Saturday Syrian opposition activists said, a day after the health directorate said all hospital in opposition areas have been knocked out of service.

Saturday was the fifth day of renewed assaults by Syrian warplanes on eastern Aleppo districts, a rebel-held enclave of 275,000 people. The onslaught began Tuesday, when Syria's ally Russia announced its own offensive on the northern rebel-controlled Idlib province and Homs province in central Syria.

"The intentional destruction of infrastructure for survival has made the besieged steadfast people, including children, elderly and men and women, without medical facilities to treat them," the statement said.

The Britain-based Syrian Observatory for Human Rights said not all hospitals in east Aleppo neighborhoods are out of service but people are finding difficulties reaching them because of the intensity of the shelling.

Opposition activists said Saturday's death toll has been the worst since the aerial campaign resumed on Tuesday. Residents said hundreds of artillery shells and dozens of airstrikes have hit the city, increasing the misery of its residents who have been suffering from lack of food and medicine because of the siege imposed by government forces and their allies in July.

"Aleppo is being wiped out in front of the eyes of the world," medical official Mohammed Abu Rajab said in an audio message to The Associated Press from inside the city. "It's not only hospitals that are out of service. All liberated areas in Aleppo are out of service."

The Observatory said Syrian government warplanes and artillery struck more than 20 neighborhoods in east Aleppo killing 27 people and wounding many others.

The Aleppo Media Council, an activist collective, said 20 people, including children, were killed in Saturday's violence in the country's largest city and former commercial center.

Pro-government media, meanwhile, reported rebel shelling on government-held parts of the city, saying they killed two and wounded others.

The latest deaths raise to more than 130 the number of people killed in northern Syria since Tuesday.

Meanwhile, an aircraft believed to be American killed late Friday a senior official with al-Qaida's affiliate in Syria known as Fatah al-Sham Front northwest of the country along with two other people, according to the Observatory and jihadi websites.

Al-Muhajer, whose real name was Abdul-Rahman Ali, joined the early jihad and then subsequent infighting in Afghanistan, according to the website, which provided a profile. It said he went on to Pakistan to study for a post-graduate degree in Sharia and fled again to Afghanistan after being sought by Pakistani police. He worked as a preacher there and was close to the late al-Qaida leader Osama bin Laden and his successor Ayman al-Zawahri. After the U.S. invasion of Afghanistan, he fled to Iran and spent several years in prison before he was released.

The Observatory confirmed that an Egyptian commander with the al-Qaida affiliate was killed along with two people when their vehicle was struck with a missile fired from an aircraft.