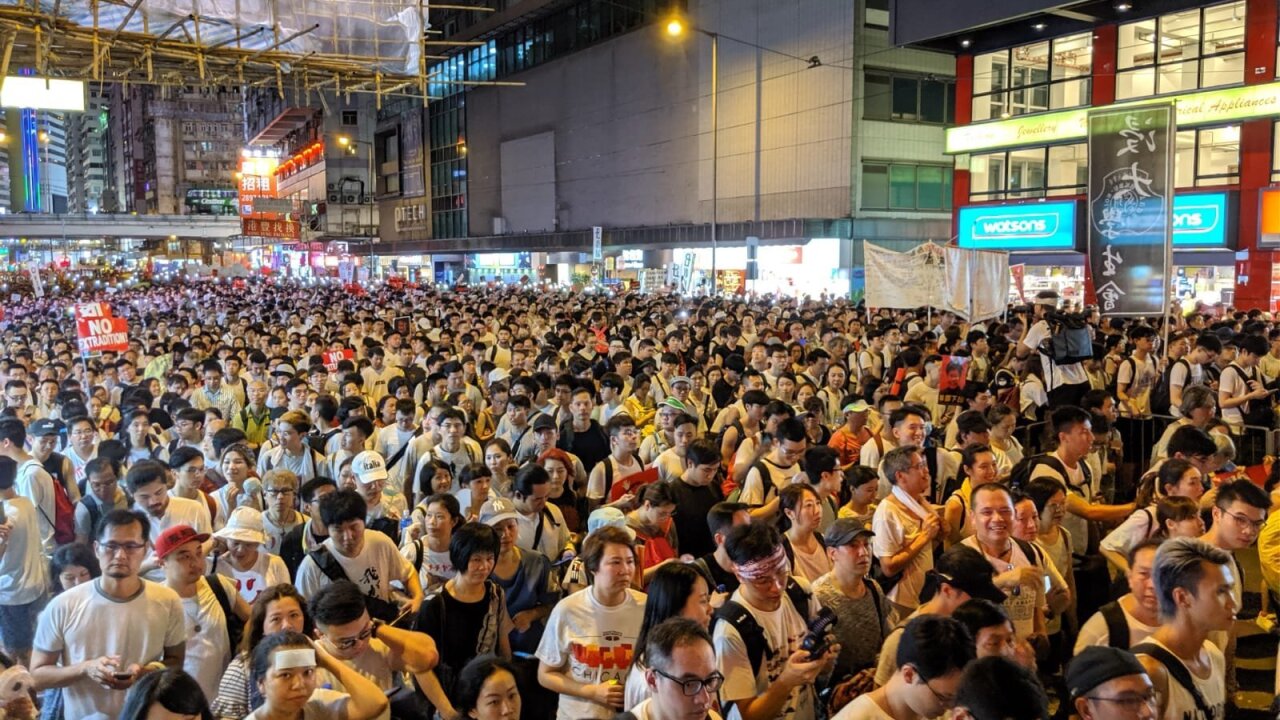 Rusty Foulkes/CNN/Rusty Foulkes/CNN
Hundreds of thousands of protestors took to the streets of Hong Kong on Sunday to oppose a controversial extradition bill that would enable China to extradite suspected fugitives from the city. 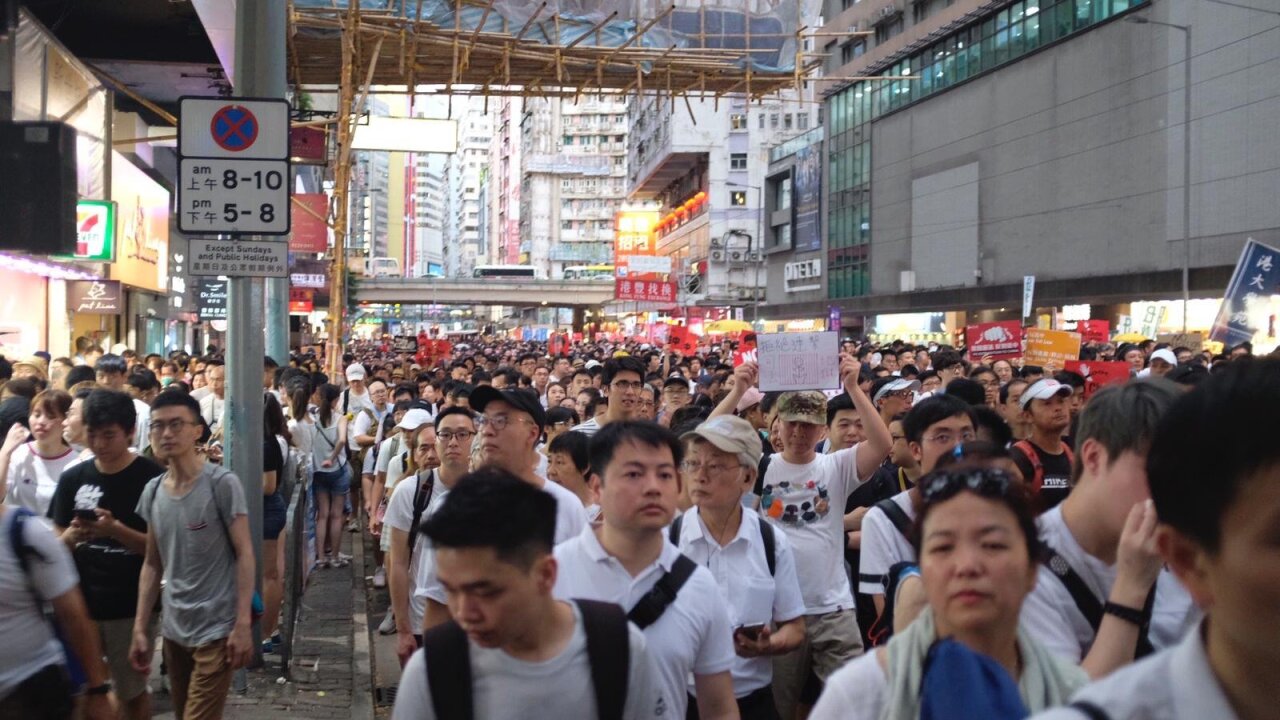 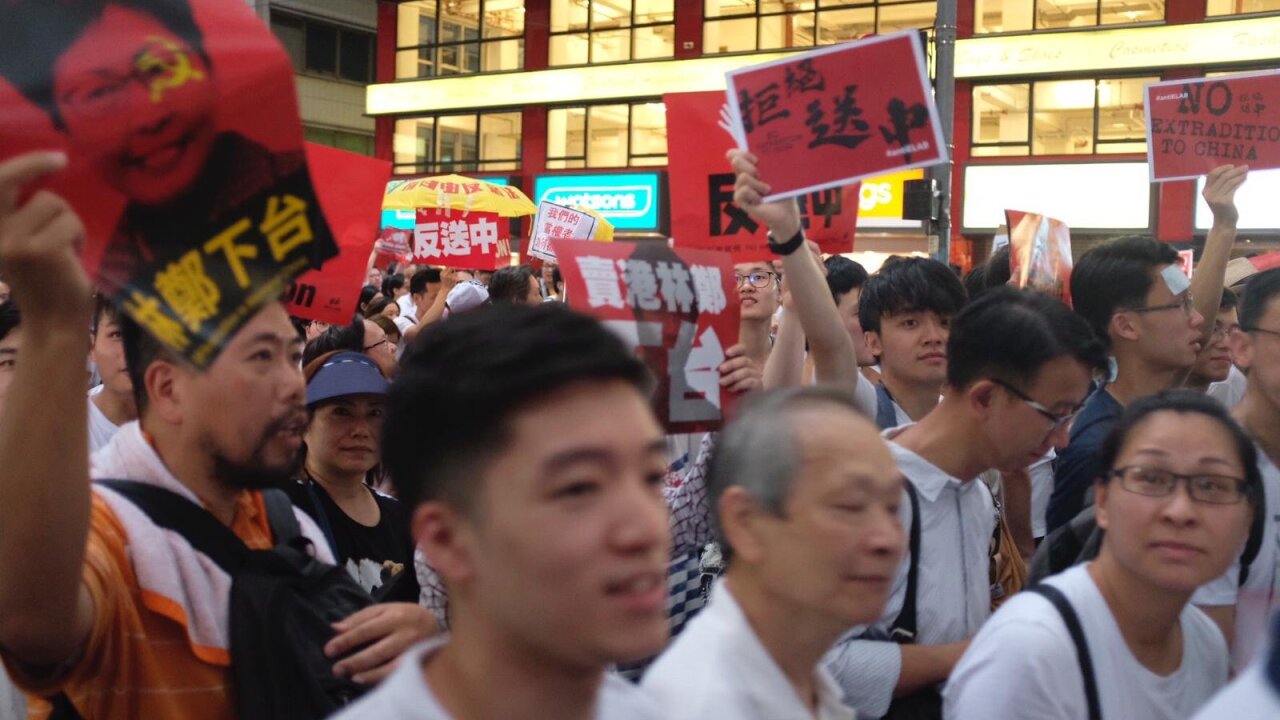 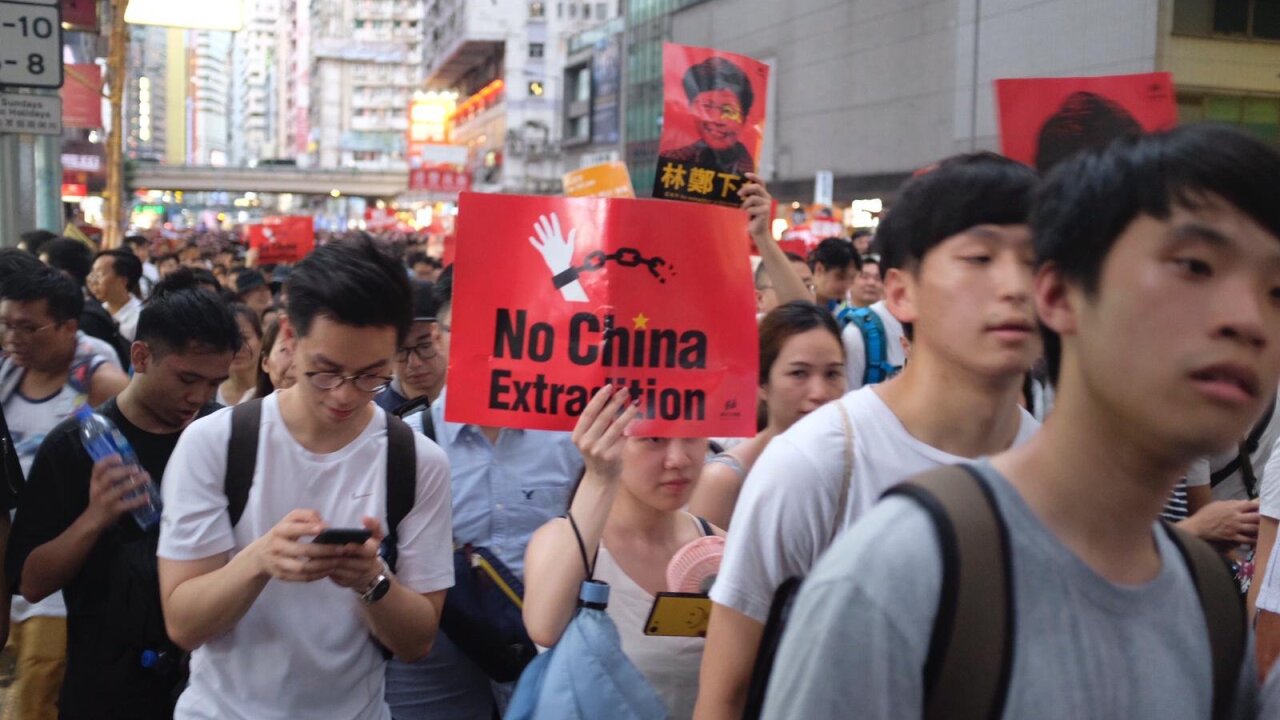 (CNN) -- More than 1 million protesters took to the streets of Hong Kong Sunday, organizers said, to oppose a controversial extradition bill that would enable China to extradite fugitives from the city, in what would be the largest demonstration since the city's handover to China in 1997.

Civil Human Rights Front, the group that organized the protests, said more than 1.3 million people marched -- a figure that accounts for more than one in six of the city's 7.48 million-strong population.

Hong Kong Police projected the number of protesters at closer to 240,000.

Critics say the bill will leave anyone on Hong Kong soil vulnerable to being grabbed by the Chinese authorities for political reasons or inadvertent business offenses and undermine the city's semi-autonomous legal system.

The bill has caused political gridlock, outcry among the city's usually pro-conservative business community, and even physical scuffles in the city's legislature, as well as criticism of the Hong Kong government by the United States and European Union.

The government says the bill is designed to plug loopholes in current law, by allowing Hong Kong to decide on a case-by-case basis whether or not to send fugitives to territories where it doesn't have formal extradition deals -- such as Taiwan, Macau and mainland China. Lawmakers have said the guarantee of a fair trial will not be written into the bill.

On Sunday afternoon, protesters gathered at Victoria Park in central Hong Kong, waving placards and wearing white -- the designated color of the rally. "Hong Kong, never give up!" some chanted.

Other protesters were heard chanting "step down," "shelve the evil law," "anti extradition to China," and called for Carrie Lam, the Chief Executive of Hong Kong, to step down, as the marchers made their way along the 3km (1.86 miles) route to the Legislative Council in the Admiralty business district.

At least seven people were arrested, the police posted to Twitter.

Police said they used pepper spray on the protesters before they escaped the area. Officers urged protesters to disperse.

Thousands also gathered to protest against the extradition bill in cities across Australia Sunday. Similar marches are planned in other cities around the world, Hong Kong political group Demosisto said in a statement.

At about 10.30 p.m. local time (10.30 a.m. ET), organizers announced that the protest had ended. CNN journalists on the ground said a bulk of the protesters had dispersed by then, leaving a number of people milling around the Legislative Council.

Late Sunday, the government of the Hong Kong released a statement acknowledging the ongoing protests across the island but reiterated the contested bill is still scheduled to resume debate on June 12.

"We urge the Legislative Council to scrutinize the Bill in a calm, reasonable and respectful manner to help ensure Hong Kong remains a safe city for residents and business," it said.

A grisly murder case in Taiwan, where a 20-year-old Hong Kong woman was allegedly killed by her boyfriend while on holiday there, expedited the case for the bill. Currently, the suspect cannot be sent from Hong Kong to face justice in Taiwan.

However, Taipei has already said it will refuse to cooperate with the new law if it puts Taiwanese citizens at risk of being extradited to China. The self-ruled island has previously seen citizens accused of crimes in countries that do not recognize Taiwan diplomatically being handed to Chinese custody, despite objections of Taipei.

"People have known exactly why there shouldn't be an extradition agreement with China for years," Patten said in a video message Thursday. "The argument that it's better to have an extradition treaty than to abduct people illegally from Hong Kong -- are people really supposed to believe that?"

Last month, representatives from the European Union met with Hong Kong Chief Executive Carrie Lam, during which they expressed concern over the bill. Members of the US Congressional-Executive Commission on China (CECC) have also spoken out against the bill, warning Lam it could "negatively impact the relationship between the United States and Hong Kong."

Business groups in Hong Kong usually take a neutral stance on contentious political issues. But this time they have also spoken out against the bill. In a bid to secure their support, the government has limited the scope of extraditable offenses -- but for some that is still not enough.

The American Chamber of Commerce in Hong Kong warned last week that there were "too many uncertainties in fundamental sections of the proposed legislation" for it to be passed in its current form.

"Hong Kong is not ready to see this bill passed and we do not see why it should be rushed through when the loophole it seeks to address has existed for 20 years," AmCham said in a statement.

"The suspect in the Taiwan murder case is serving sentences for other criminal offenses in Hong Kong but is expected to be released this October," Cheung said. "There is thus a pressing need to provide a legal basis for the assistance that we want to render to Taiwan, before the (legislature) goes into summer recess from mid-July to October."

The extradition bill, particularly an attempt to fast track it through Hong Kong's semi-democratic legislature, has reinvigorated the city's flagging opposition movement after numerous setbacks.

Organizers claimed 130,000 people took part in a protest against the bill in April. While police gave the lower figure of 22,800, it was still the biggest protest since the 2014 Umbrella Movement, an ultimately unsuccessful protest over political reform which shut down parts of the city for months.

Fears over the bill -- and criticism from a broad swath of Hong Kong society -- echo 2003 when half a million people took to the streets to oppose the passage of an anti-sedition law. That legislation was shelved but the issue has become such a hot button topic in Hong Kong that -- despite promising to do so -- no governments since have attempted to introduce it.

Sunday's protest comes days after the 30th anniversary of the Tiananmen Square massacre, a pivotal moment that dashed hopes that China would democratize before it took control of Hong Kong in 1997.

Hong Kong has commemorated the massacre with a candlelit vigil ever since, the only place on Chinese soil where mass remembrances are held. Organizers said more than 180,000 people joined a vigil in the city's Victoria Park on Tuesday, the largest such event since the 25th anniversary in 2014, which came in the politically fraught run-up to the Umbrella protests.