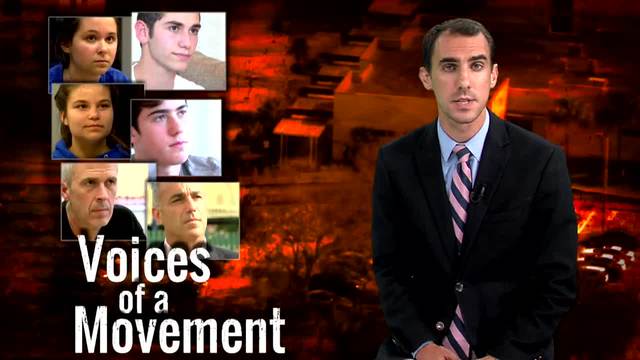 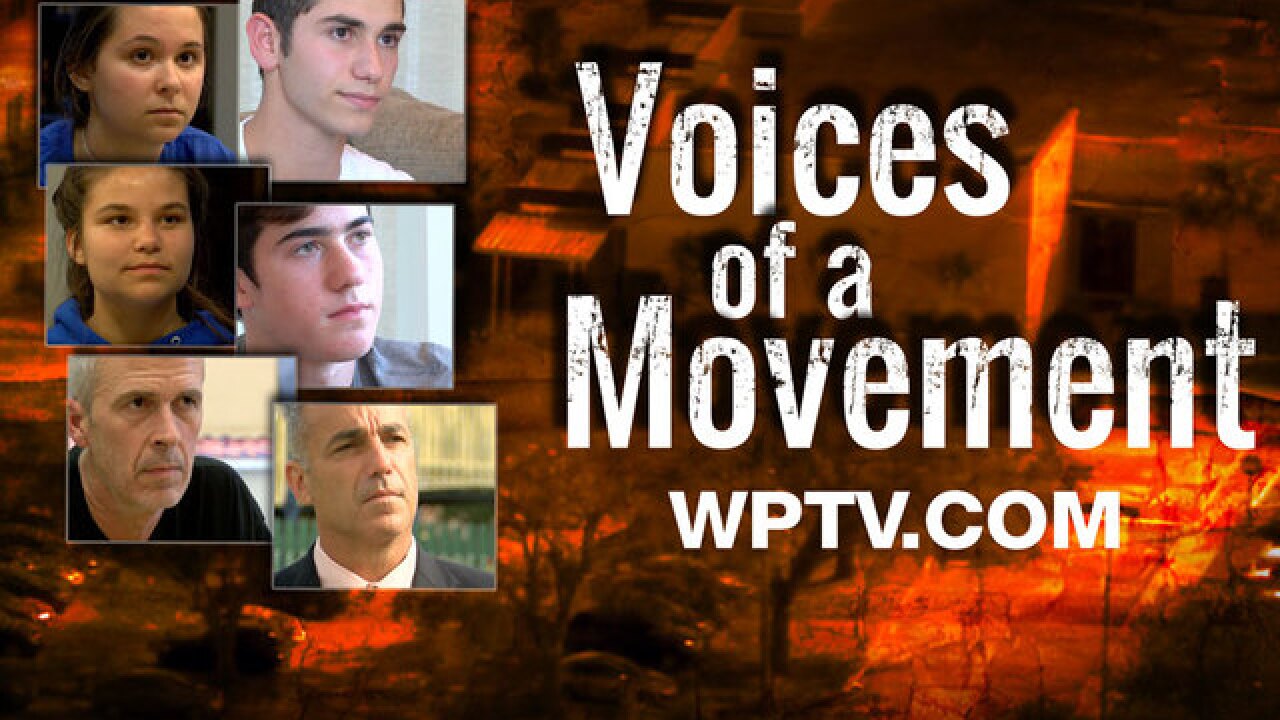 In my coverage in all the weeks that have followed, I found students, teachers, and parents starting a movement.

I still remember people’s cries for help, wondering if their loved one was dead or alive.

“We’re suffering right now this is not easy. If anyone has seen Shane Tomlinson, let me know,” said Renta the day after the shooting.

I still remember the confusion and chaos.

There was anger and frustration. There was no change, no action.

Then on Valentines Day…..

“That’s what I’m going to remember Valentines Day as. The day 17 people were killed at my school,” said Douglas Junior Zach Hibshman.

A 19-year-old walked into building 12 at Marjory Stoneman Douglas High School and opened fire with an AR-15 semi-automatic rifle he purchased legally despite a documented history of mental health issues.

“I was in my AP Government class. Fire alarm went off,” said Senior Julia Salomone. “Started freaking out.”

Julia called her sister Lindsey who was in Building 12.

“Sometimes I’ll stay in that parking lot and I’ll notice that building and I’ll think did this shooting really happen here? Are there still blood stains in there? Did people really die in there? It’s surreal still,” said Hibshman.

Survivors and loved ones now find their own lives redefined by grief.

“I’m going to miss her and I’m never going to do the things that I always wanted to with my daughter and that’s going to haunt me the rest of my life,” said Andrew Pollack who lost his daughter Meadow.

“I think after the initial sadness we quickly turned to what now, what now with these people we no longer have,” said Julia.

They were fueled with anger.

I captured a lot of that in the days after, from Tallahassee to our nation’s capital.

“Great high school with great intelligent kids that want to make a change that have previous background knowledge on the stuff that needs to happen for change to come. It was just the perfect formula,” said Hibshman.

I want to introduce to some of those involved. The Salomone Sisters, two best friends, an AP Government teacher, and a father.

We begin with Julia and Lindsey.

Julia is a Senior at Douglas. She wants to major in environmental studies and journalism.

She also volunteers at a turtle hospital. She loves doing what a typical teenager does, hanging out with friends and being outside.

“That’s all fallen by the wayside amid all this. But not writing. Writing has been a great outlet for me,” said Julia.

Lindsey is a Freshman at Douglas. She loves tennis and being around her friends.

It’s still hard for her to grasp what happened at her school.

“It’s been difficult. Teachers have had to snap me out of it. I don’t pay attention very well. It’s been hard. I try my best,” said Lindsey.

Both have been very active in the “Never Again” movement, a group pushing for what they call common sense gun laws.

It hasn’t been easy.

“It’s hard to mourn, be an activist, go to school and do everything at the same time,” said Julia.

“After it happened I just filled my life with fun and then school started. It was hard, but I’m getting back into it,” said Lindsey.

Their hard work and determination with activism made change.

Don’t even think they’re done though.

“Students aren’t ever going to stop talking about this and people should know that and we’re not going anywhere,” said Julia.

What I noticed over my time covering these young activists was how tech savvy they are.

So that brings me to Adam Buchwald.

He’s just a teenager who was focused on getting good grades.

Adam is also a DJ. He goes by DJ Bucko.

I can’t tell you how excited he was to show me his turntables.

“Not giving up this hobby or passion up,” said Adam.

He uses his talents as a DJ for charities. He recently raised money for pediatric illness around the world.

After Feb. 14, he now has another passion. Activism.

He connected with his good friend Zach Hibshman who is a sports fanatic.

“Love to play basketball. I’d say one of my goals right now is actually trying to dunk,” said Zach.

Together they created their own movement called Parents Promise to Kids.

“Main thing we wanted to convey is children do have a voice,” said Zach.

“Our movement is unique and much different,” said Adam.

Basically they have parents sign a contract promising their kids they’ll vote for politicians who support stricter gun laws.

So far they’ve received more than a thousand contracts. Recently they added a politician rating system.

“This movement was not started for us, but for every other person in the nation to make them feel safe wherever they go because we didn’t feel safe that day and that’s not fair,” said Zach.

Both plan to focus on their movement into their senior years and beyond.

“Before the shooting, this wouldn’t be a part of my everyday life. I wouldn’t be an activist. I’d be doing my homework, studying for ACT’s and playing sports. Now I’m still the normal kid, but still finding time to be an activist,” said Zach.

'It's going to be with them the rest of their lives'

“Obviously it’s going to be with them the rest of their lives, so I think they’re motivated enough to stick with their message,” said teacher Jeff Foster.

Some of that motivation you hear so much about came from Foster's classroom.

“I think I’ve taught them how government works, now I’ve seen it in action,” said Foster.

“I strive to make sure these kids are active,” said Foster.

Many of those kids are in Foster's class.

“There’s no question we have a lot of discussion about gun control. Whether it’s through social media or in class,” said Foster.

Foster stands behind his students.

He helped his students push Florida lawmakers for change.

“I think if we make it more difficult for them to get weapons that can kill massive amounts of people. I just don’t understand why that can’t be something that we can agree upon. I understand the 2nd Amendment people get all fired up and that’s just the first step and that’s a slippery slope. I’m here to tell you there’s no slippery slope,” said Foster

“For me it’s why are we focused on gun control when right now we should fix our schools,” said Andrew Pollack.

He has been a powerful voice for change since Feb. 14.

“Really motivated me and plus my daughter being murdered empowered me to make a difference because my daughter would want me to fight for her,” said Pollack.

Pollack is focused on school safety. He wants metal detectors and more officers at schools.

“Courthouses are safe. Federal buildings are safe. You go to a stadium where there are 70,000 people in it and we can all go through metal detectors and feel safe. So I feel that we should do that for our kids,” said Pollack.

The law raises the minimum age to buy a gun to 21. It allows certain school staff to be armed after training. The bill also provides additional funding for more school resource officers and mental health.

Pollack is not done.

“Reach out to these other governors, there’s a meeting in July that I will be speaking at,” said Pollack.

In the meantime Pollack has another priority.

He wants to replace the playground at Betti Stradling Park in Coral Springs with a memorial for his daughter and the other 16 victims.

“It will be something therapeutic. Something that we will never forget,” said Pollack.

So much success in these movements, but there will be failures too in a country where gun laws are so fiercely debated.

I asked Foster about that.

“We all want the same thing and there’s no reason that we have to mirror America and just hate each other because were on the opposite sides of the ledger. Gotta believe that maybe we can set a precedent, a compromise and Tallahassee and DC can follow us,” said Foster.

Plenty of work to do

“Incredibly proud to be making this step, but it’s not the only step,” said Julia.

With every new step, Parkland’s leaders have become national leaders.

Whether it’s two sisters, two friends, a teacher, or a dad, their lives are reshaped in ways they could never have imagined.

“I really believe that public opinion seems to be on our side and I really think that if politicians don’t get on board, they’re going to be voted out and that turnover will lead to people in office that support our views and in turn would lend it to Emma and David and those kids literally being in textbooks and talking about how in 2018-2019-2020, America changed about the way they feel about gun ownership,” said Foster.

“We’re going to continue this movement as long as it needs to be. It’s going to be here for years to come, we’re not letting this go away,” said Adam.