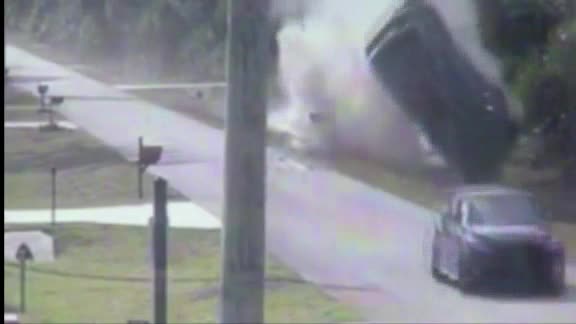 Two Florida teens were injured over the weekend when the Lexus they were using in a drag race went airborne and flipped.

COLLIER COUNTY, Fla. — (WBBH/CNN) - Two Florida teens were injured when the Lexus they were using in a drag race went airborne and flipped last weekend in Southwest Florida.

A neighbor's camera captured the scary wreck, which shows both cars drive by at first very casually. The vehicles then turn around, wait for a couple of seconds and start racing down Fourth Avenue Northeast in Collier County.

That race lasted less than a minute.

Neighbors heard a bang, but weren’t sure what it was at first until they noticed car parts spread all over.

Police, EMS and fire crews quickly came out to check on the teens, but many say they're shocked something like this happened so close to their home.

The woman whose camera recorded the crash says she has talked to the grandmother of one of the teens.

She says the woman told her the young person broke some ribs in the crash.