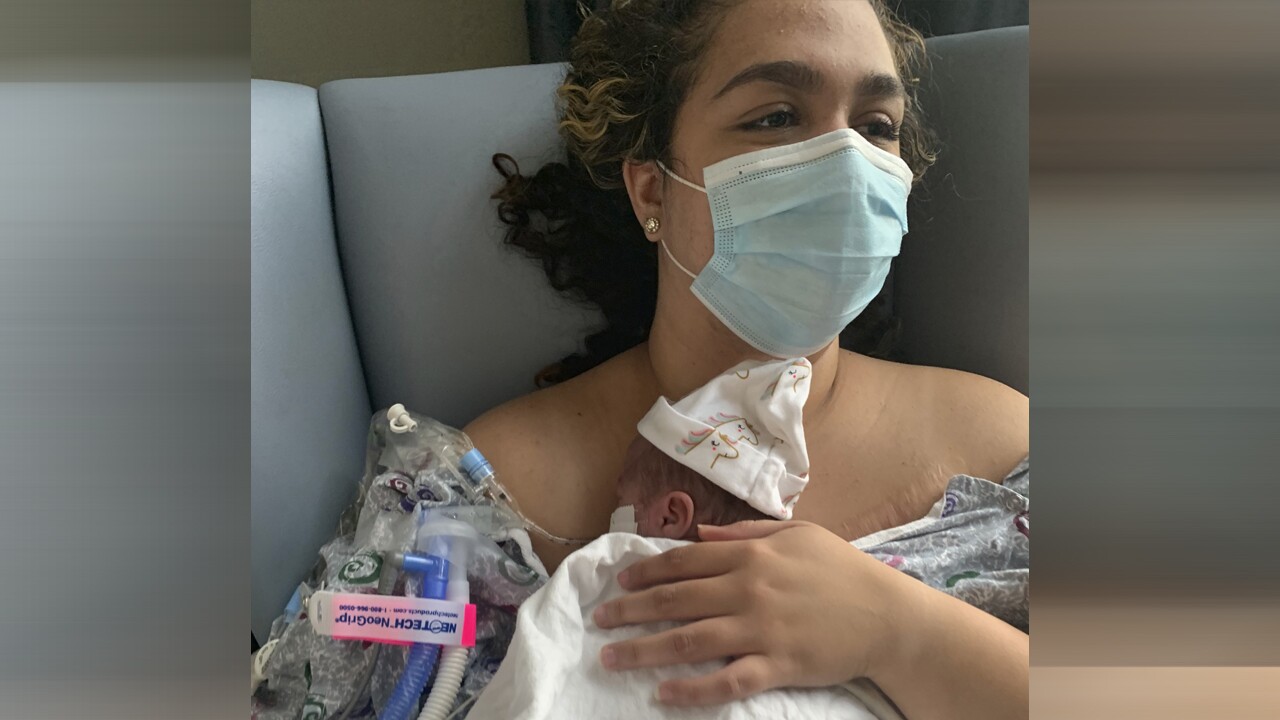 ORLANDO, Fla. — Six months after she was born at 22 weeks and 4 days in the middle of a global pandemic, baby Diana Peguero was released from a central Florida hospital and is now meeting her milestones at home with her family.

Her mother, Jomary Tavarez, was just 20 weeks pregnant when she went for a routine checkup in April and doctors discovered she was already starting to dilate, the Orlando Sentinel reported.

She was admitted to Winnie Palmer Hospital for Women & Babies, where doctors put her on bed rest. Because of the coronavirus, she spend much of her time alone in the hospital room. Her husband could only stay with her on weekends because he had to work.

“It was very lonely and very hard — just thinking about what was going to happen, if the baby was going to survive or not," Tavarez told the newspaper from her home in Ocala.

On Mother's Day, she woke up in pain and bleeding. Contractions started and by 9:09 a.m. baby Diana was born, weighing 12 ounces and just 9 inches long.

Doctors said Diana was so tiny that they think she may have been even more premature than originally thought.

“So if you take how we think that she was probably less than 22 weeks and you add the fact that she was 12 ounces, I will say that the outcomes of survival were extremely rare for her,” said Dr. Thais Queliz, neonatologist at Winnie Palmer Hospital, in an Orlando Health video.

She spent six months in the NICU.

“She looks small (in the photos), but nothing compares to seeing her in person,” said Tavarez, 26. “It was the smallest human I’ve ever seen. It was incredible. I couldn’t believe that she was moving and she was alive.”

At first, doctors told the parents that most babies Diana’s size didn’t survive past three days. Diana did. Then they set the goal of surviving for two weeks. Diana passed that milestone, too.

“And ever since, she’s been super feisty,” said dad, Federico Peguero.

By the end of June, her parents were able to hold her for the first time, swaddled and cradled in a pillow. In July, they got to really hold her.

Tavarez was discharged from the hospital a few days after giving birth. So the couple drove about 80 miles (128 kilometers) each way from their home in Ocala to visit her.

“It was very difficult. There were days where we spent longer on the road than with her,” said Peguero.

There were many ups and downs in NICU, but she never required surgery, they told the newspaper. She now weighs 7 pounds and is 19 inches.

“It’s been surreal. Since the moment I found that I was pregnant, everything just happened so fast,” said Tavarez. “We’re first-time parents and then you have this special little lady to care for.”