Survey: Florida has the worst drivers in the nation, ranked No. 1 two years in a row

&lt;p&gt;According to a survey compiled by personal-finance company SmartAsset, Florida is the No. 1 state for the most unsafe drivers for a second year in a row.&lt;/p&gt;

Florida has always had a reputation for having bad drivers.

Now, a new survey is giving some legitimacy that not only does the Sunshine State have bad drivers, but the worst in America.

According to a survey compiled by personal-finance company SmartAsset, Florida is the No. 1 state for the most unsafe drivers for a second year in a row.

The website based its rankings on the number of drivers, DUI arrests, the percentage of drivers insured, tickets and people killed in car crashes.

The study also added that Floridians Google “speeding tickets” and “traffic tickets” more than any other state and that they have the second lowest number of insured drivers in the nation.

The top 10 states with the worst drivers, according to the survey: 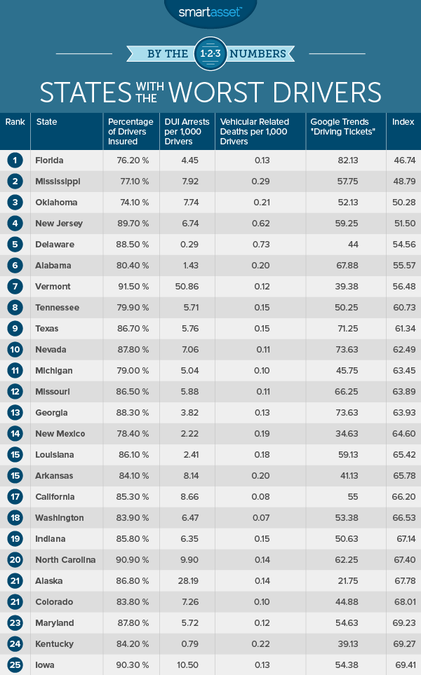