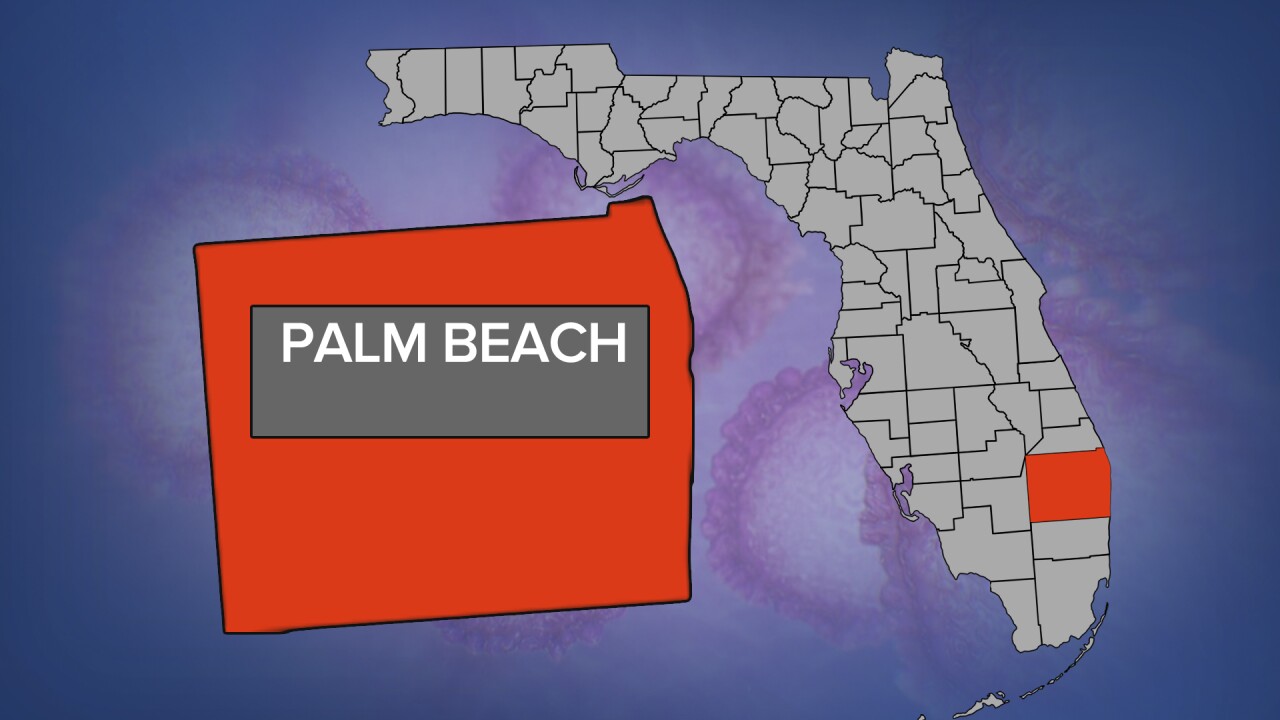 WEST PALM BEACH, Fla. — The state death toll from coronavirus has reached triple-digits, 1046, with 59 additional fatalities, one below the past two days, as Palm Beach County's deaths rose by 11 to 155, the Florida Health Department announced Friday night.

State deaths increased by 6.0 percent. Before back-to-back death totals of 69, there were 44 on Tuesday and 49 on Monday. The record number of deaths was 72 on April 14.

In addition, the percentage of positive cases has been declining this week. A total of 320,984 have been tested in the state with 288,505 negative results for 9.5 rate, compared with 9.8 percent Thursday and 10.3 percent seven days ago. In Palm Beach County, the numbers increased by 64, after 146 Thursday, 93 Wednesday and 60 Tuesday.

Two massive testing sites are located in Palm Beach County: the South County Civic Center and FITTEAM Ballpark in West Palm Beach. In addition, a test site has opened in Belle Glade as well as in Fort Pierce. Other big testing sites at located at Marlins Park and Hard Rock Stadium in Miami-Dade County.

Miami-Dade County has the most deaths in the state, increasing by 17 to 287 in one day. Broward County rose to 162 with an increase of 5 for second place.

Thirty-five of the additional 59 deaths are linked to South Florida, including two fatalities announced in St. Lucie, two women 91 and 97, rising to 19. Martin and Indian River each remain at 5 and Okeechobee has yet to report a death.

South Florida accounts for 633 deaths, which is 60.8 percent of the state total though the population comprises 30 percent.

The deaths in the state range from a 26-year-old man in Miami-Dade to a pair of 101-year-old women in Miami-Dade and Collier. The death in Collier was announced Thursday along with a 99-year-old woman in the county. Ninety-three percent of the fatalities are 55 and older and 59 percent 75 and older.

Florida ranks 10th in the nation in total deaths and ninth in increase of deaths from the day before, according to early Friday night tracking by Worldometers.info.

New York leads with 21,283 deaths, including 422 deaths after 507 additional deaths Thursday and 661 more fatalities Wednesday. Every other sttate reported fewer than 200 more deaths Friday New Jersey dropped from 305 to 189 for a total of 5,617, second in the nation. Michigan decreased from 113 to 108 for third place at 3,085 but Massachusetts increased from 178 to 196 for fourth place at 2,556. Washington, which at one time was the epicenter in the United States, is at 14th place at 723 with 12 more deaths Friday, falling behind Indiana with 741.

Florida is 548 deaths behind No. 9 California.

Georgia, which is opening nonessential businesses, is in 11th place with 899, an increase of 18 deaths.

Italy, which at one time was an epicenter of the virus, is second in the world but the nation gained only 1.6 percent with 420 more deaths. No. 3 Spain increased 367 fatalities for a 1.6 percent gain. China, the original epicenter, reported only six new cases and zero new deaths Saturday. and is now at 4,632 in ninth place.

Palm Beach County's death count is higher than 19 states and the District of Columbia. The deaths range from a 38-year-old man to a 96-year-old woman.

The county's total number of confirmed cases are wide-ranging, with the youngest person being an infant girl and boy and the oldest a 104-year-old man. In the state, there are 146 cases of children up to 4.

The most cases on the Treasure Coast are in Port St. Lucie with 154.

Palm Beach County has 2,600 cases out of 22,203 total tested, including those awaiting results.

On the Treasure Coast, only 7 additional cases were reported Friday --3 more each in Martin and St. Lucie, and one more in Indian River.

A total of 4,817 people in the state have been hospitalized at one time, which is 177 more than the day before . That means it is a running total and includes people who have been released or died. The number is 399 in Palm Beach County, 68 in St. Lucie, 40 in Martin, 26 in Indian River and 5 in Okeechobee.

Gov. Ron DeSantis said Friday state hospital bed capacity, including in intensive care units, is a 40 percent, which is less than before the pandemic.