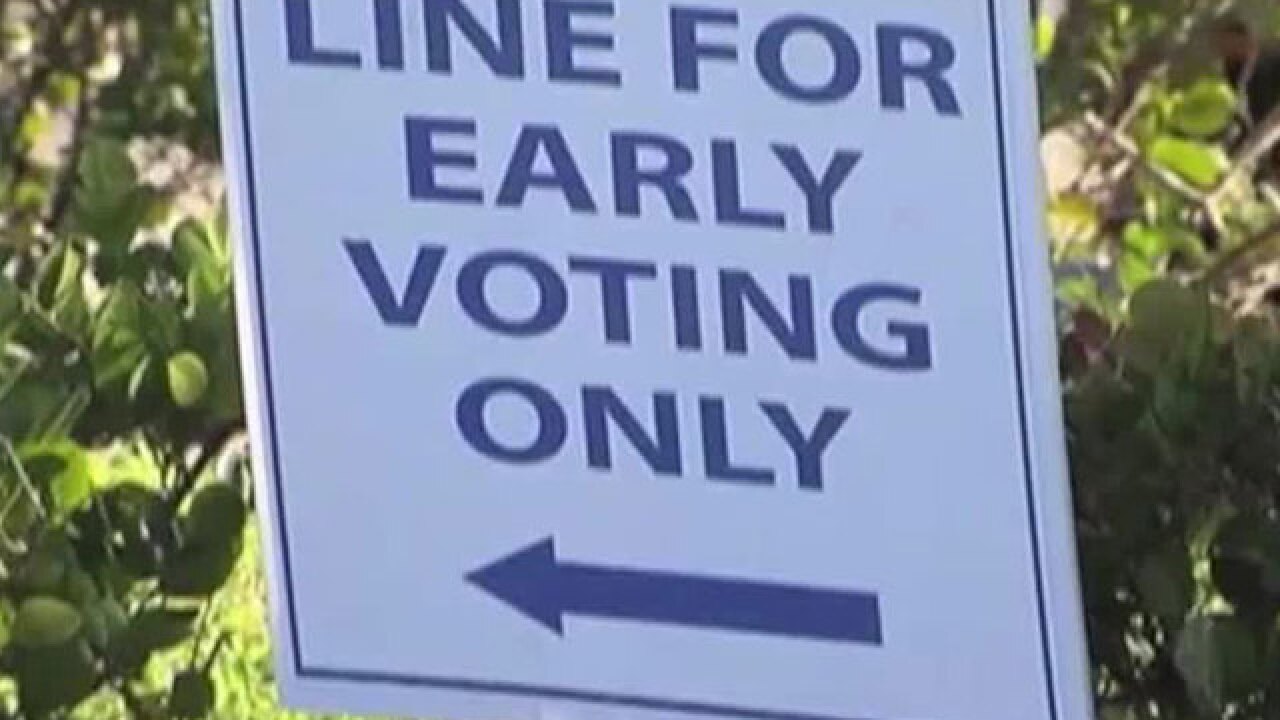 TALLAHASSEE, Fla. (AP) — Florida is going to bend some of the voting rules for voters living in counties hammered by Hurricane Michael.

The administration of Gov. Rick Scott announced Thursday that eight counties in Florida's Panhandle can start and end early voting beyond existing deadlines. Normally, early voting is supposed end the weekend before the election.

Additionally, the state is going to make it easier for people displaced by the storm to receive and send ballots by mail.

Hurricane Michael roared ashore last week and left a trail of ruin for 80 miles, from the Gulf of Mexico to the Georgia state line.

Under Florida law, Scott could have postponed the election beyond Nov. 6, but there's is an open legal question on whether that authority would extend to federal races.

Florida Secretary of State released the following statement on Thursday:

TALLAHASSEE, Fla. - Last week, Hurricane Michael made landfall as a powerful Category 4 storm in Florida’s Panhandle. It devastated homes, businesses, infrastructure and left 400,000 people without power. With the General Election less than three weeks away, this unprecedented storm has impacted the normal operations of administering an election in counties that were hit hardest. Before and after Hurricane Michael’s landfall, the Department began reaching out to counties affected by the storm to determine any potential impacts to voting sites and the administration of the upcoming General Election. Today’s plan is based on feedback received from the locally-elected Supervisors of Elections. The Florida Department of State’s top priority is ensuring that there are ample opportunities for Floridians impacted by Hurricane Michael, many of whom lost their homes, to be able to cast ballots while protecting the integrity of the 2018 General Election.

Secretary of State Ken Detzner said, “The Department shares the Governor’s commitment to ensuring that all registered voters from counties devastated by Hurricane Michael are able to exercise their right to vote safely and securely in the upcoming General Election. With the input from local Supervisors of Elections, we put forth recommendations to Governor Scott and we greatly appreciate the Governor’s support of our requests.”

Today, the Governor issued Executive Order 18-283 [flgov.com] which gives Supervisors of Elections in Bay, Calhoun, Franklin, Gadsden, Gulf, Jackson, Liberty, and Washington counties the authority to extend and enhance voting options based on needs and challenges they have identified, including:

Voting by fax or email is not an option under the Executive Order. In the hardest hit areas, communication via phone, fax and email remains challenging and would be an unreliable method for returning ballots. Additionally, past attempts by other states to allow voters impacted by natural disasters to fax or email ballots have been rife with issues. The Department is actively reviewing ways to provide more absentee ballots to those voters in the counties severely impacted by Hurricane Michael.

Before the storm hit and at Governor Scott’s direction, Secretary of State Ken Detzner extended the voter registration deadline in counties whose offices were closed on the day of the registration deadline due to Hurricane Michael to allow for paper applications to be accepted the day their offices reopened.

The Department is also in contact with the United States Postal Service (USPS) regarding potential impacts to the delivery and receipt of vote-by-mail ballots in affected counties. USPS has already resumed service in many counties and is working to resume service in all affected areas as quickly as possible. The Department will continue to work closely with Supervisors of Elections and provide any needed assistance leading up to the General Election.