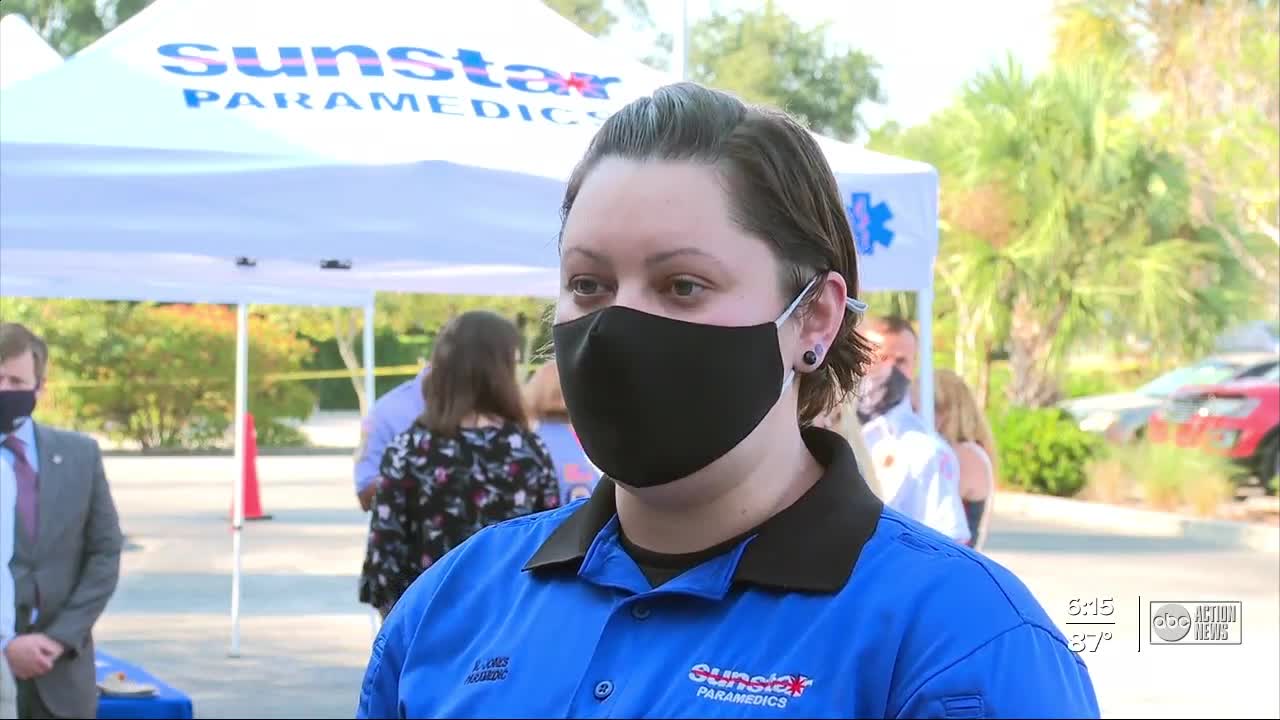 A Largo teen is being hailed a hero for his quick thinking and calm demeanor, two things paramedics say were crucial in saving his dad’s life. LARGO, Fla. — A Largo teen is being hailed a hero for his quick thinking and calm demeanor, two things paramedics say were crucial in saving his dad's life.

In August, then 18-year-old Zachary Musgrave reacted in seconds after his dad had a major heart attack in the basement of the family's home.

"I was pretty terrified. I just held myself together the best I could," Musgrave said.

Musgrave quickly dialed 911 an got through to 911 telecommunicator Matthew Albright, who coached him through performing CPR for the very first time.

"He was cool, calm and collected and followed directions to do exactly what he needed to do," Albright said.

For seven minutes, Musgrave performed CPR on his dad before paramedics arrived. It's something first responders say saved his dad's life.

Niesa Jones was one of the first Sunstar Paramedics to arrive on the scene.

"That's absolutely what happened," she said. "His son saved his life. We helped."

David Musgrave, Zachary's father, was rushed to Largo Medical Center, and just nine days after his heart attack, he was cleared to come home. Paramedics called his recovery a miracle because he came into the hospital under cardiac arrest with a 100% blockage in his left anterior descending artery — what some refer to as a "widowmaker heart attack."

"I looked at his charts and it's truly a miracle that the man is walking," said Patti Squires, the Associate Chief Nursing Officer at Largo Medical Center.

David Musgrave says his son has become his hero.

"I'm so proud of him. If it wasn't for him starting the process, I probably wouldn't be here," he said.

"I'm just thankful that I was there and I was able to save my dad. I'm just happy he's here with us today," Zachary Musgrave said.

On Wednesday, David Musgrave and his four children met the first responders that helped keep him alive.

Alana Morris, one of the first Largo Firefighter paramedics to arrive on the scene, said the ceremony was touching.

"To actually have a patient come back and thank us for what we did and to see him alive was just a great experience. There are no words to describe that," Morris said.

Now, the Musgrave family's story is inspiring a new mission to save lives.

The hands-only training is especially crucial as COVID-19 concerns continue to impact Floridians' daily lives and local medical leaders say not everyone may be comfortable performing mouth-to-mouth.

"I think that everybody should learn CPR because that's what saved my life," David Musgrave said.

This story was originally published by Sarah Hollenbeck on WFTS in Tampa, Florida.