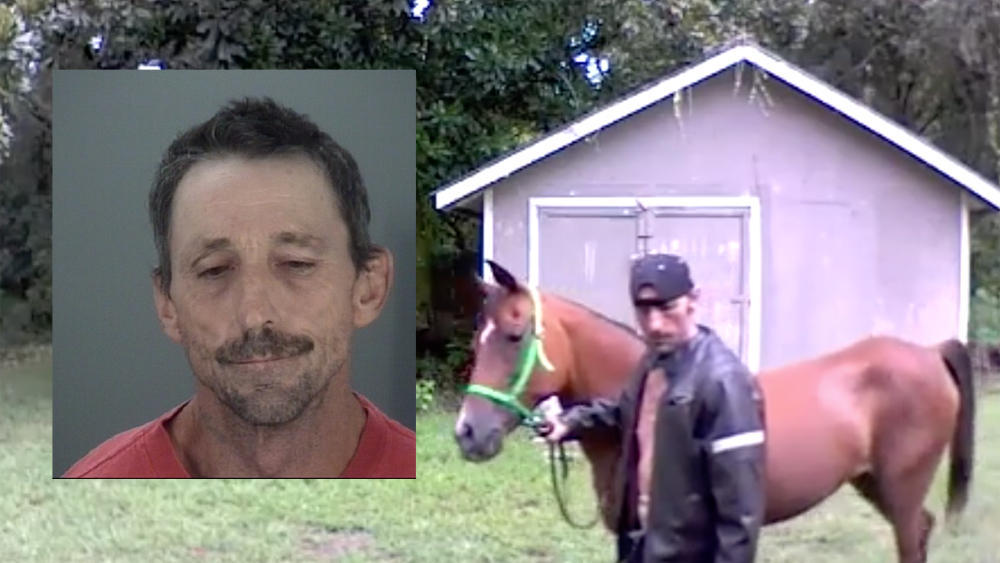 A Florida man is accused of breaking into a home with a horse at his side and blaming the horse!

PASCO COUNTY, Fla. — (BAY NEWS 9/CNN) - A Central Florida man is accused of breaking into a home with a horse at his side and blaming the horse!

Homeowner Steve Ferguson said he isn't surprised by the break-in. He bought the home as an investment property and said it has been broken into before.

"The house is vacant. There are some unsavory characters that live in the area," said Ferguson.

But no way did he expect what his security system caught on video July 25.

"Sure enough, it's a guy with a horse walking through my backyard," said Ferguson. "Maybe a bicycle or a truck, but a horse? Very surprised."

According to an arrest report, he got into Ferguson's house by breaking a back window.

The report also states he said the horse got into the yard through a broken fence and he went after it.

Video shows Maddox trying to get in through the front door with the horse at his side.

By the time deputies arrived at the home, the animal had gotten away.

"Upon arrival, I saw the horse running up the street," said Ferguson.

They say he approached them as they responded to the burglary call and asked if they had seen a horse, which was found a short time later.

Ferguson says he'll be ready if this happens again -- no matter what kind of animals future burglars bring.

The sheriff's office says it turns out it wasn't even Maddox's horse -- he actually borrowed the trusty steed.

The horse was later returned to its owners.

Maddox is charged with burglary of dwelling.