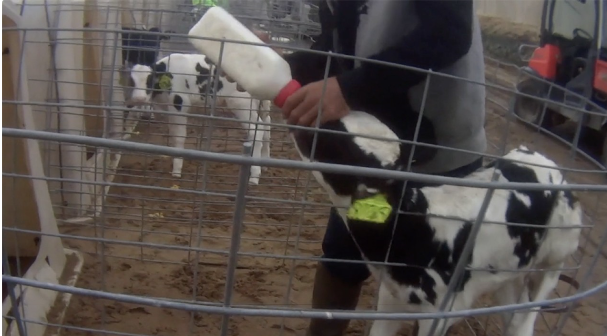 The owner of a farm is apologizing and says workers have been fired after the investigative group, Animal Recovery Mission, released details about what it calls "disturbing evidence of ongoing animal cruelty." 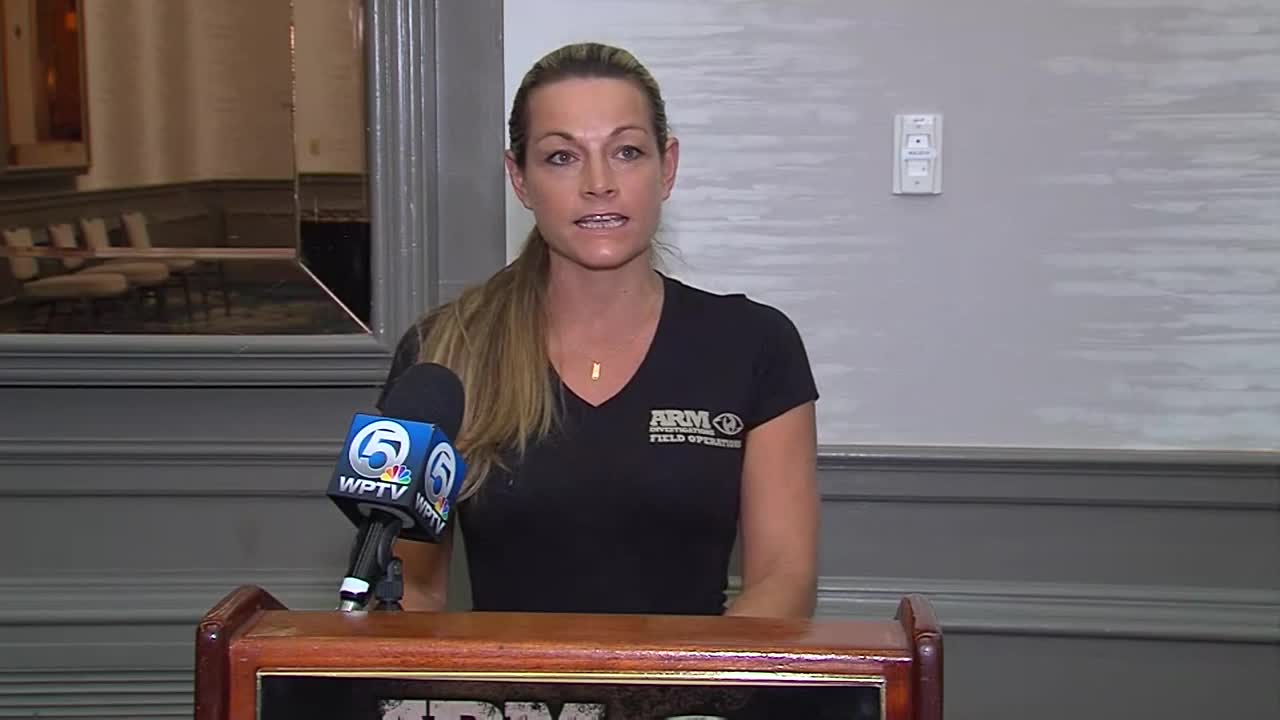 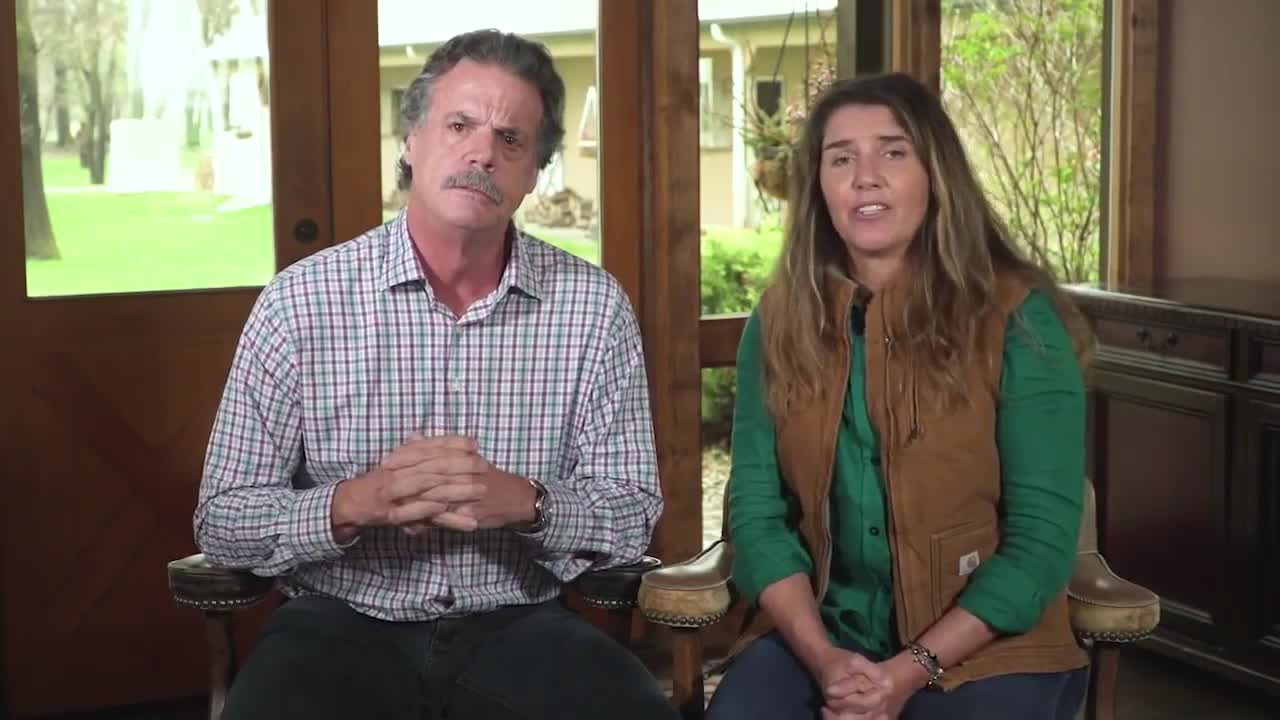 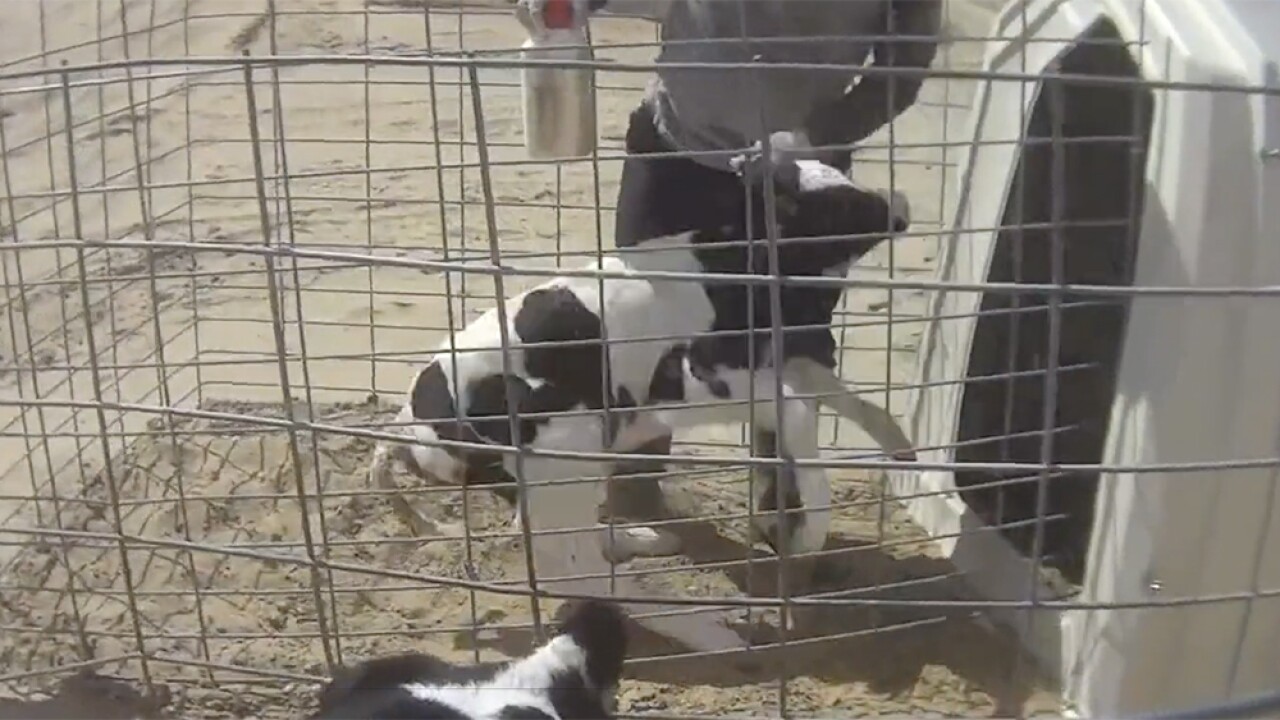 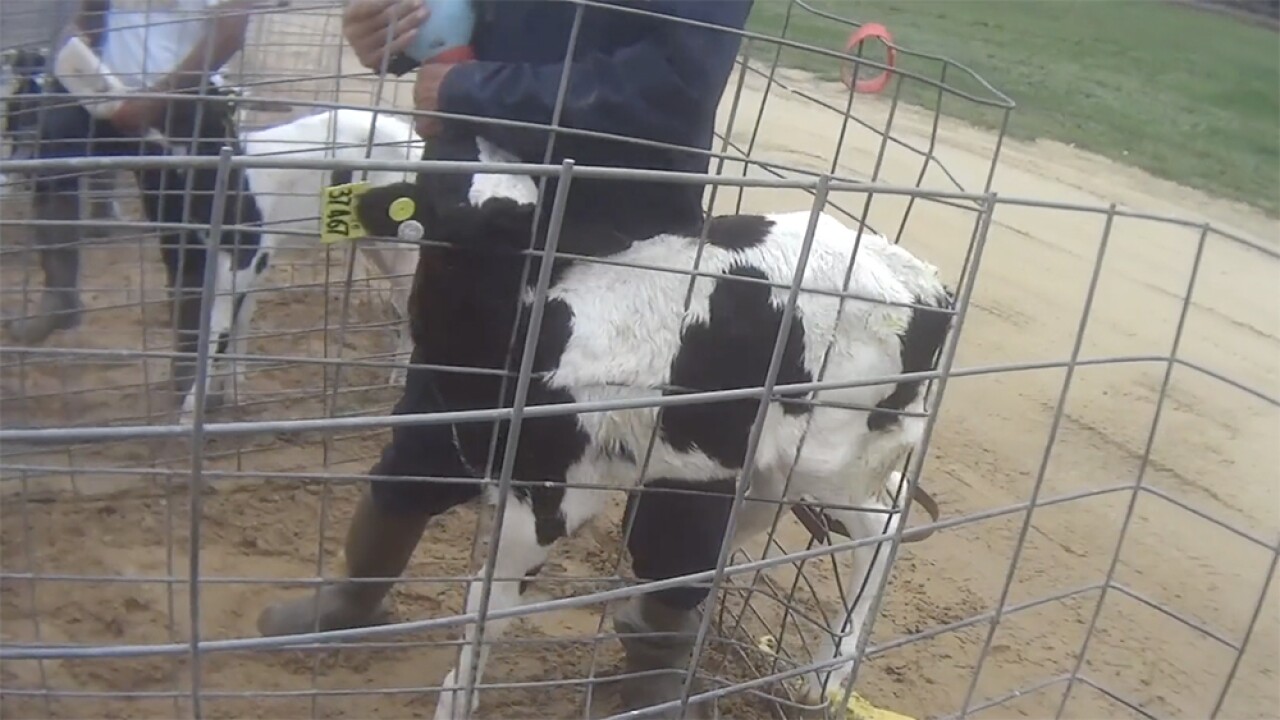 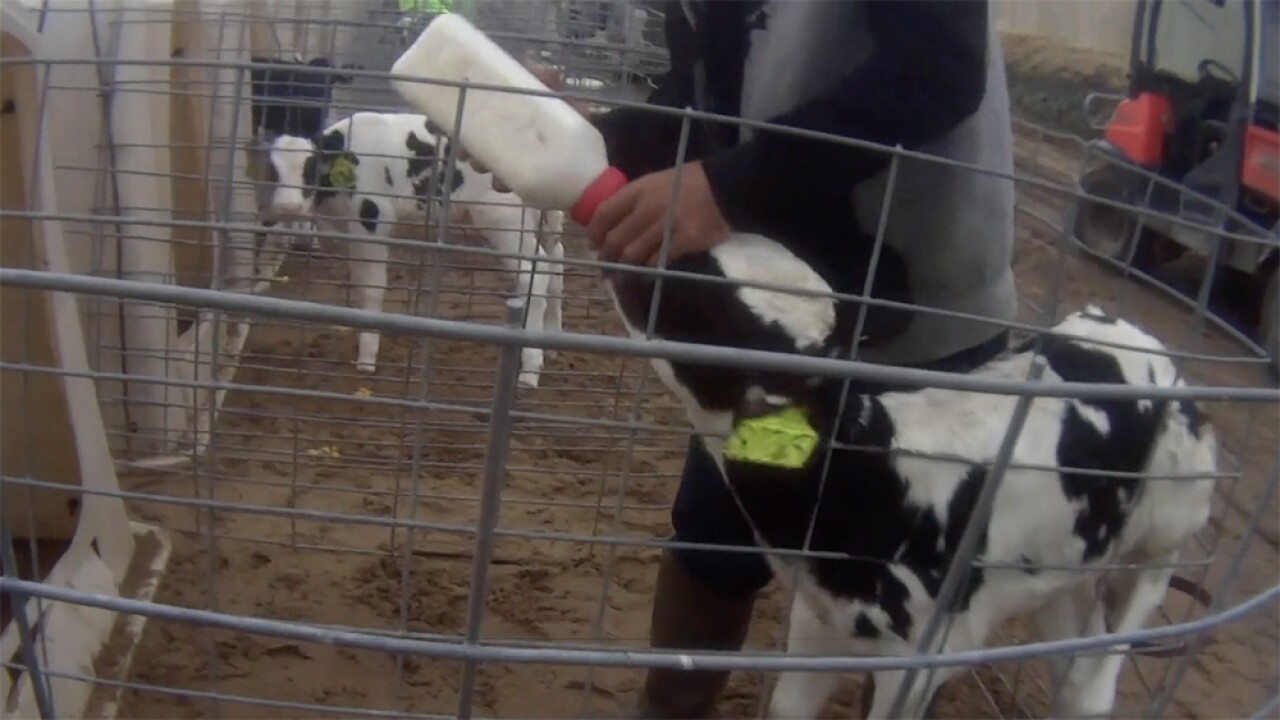 DEERFIELD BEACH, Fla. — The owner of a farm is apologizing and says workers have been fired after the investigative group, Animal Recovery Mission, released details about what it calls "disturbing evidence of ongoing animal cruelty."

ARM held a news conference in Deerfield Beach on Tuesday about its undercover investigation into Fair Oaks Farms, located in Fair Oaks, Indiana.

The farm produces dairy products for the Fairlife milk brand, which are sold at places like Publix, Walmart, Target, and Winn-Dixie, according to its website.

"The cruelty witnessed by the investigator was ghastly and abominable," said Rachel Taylor, a spokesperson for ARM.

ARM said between August and November of 2018, an undercover investigator witnessed extreme abuse to animals at the Indiana farm, including workers dragging cows, throwing them into trucks, and hitting them with milk bottles.

"Sick or injured cows were provided no treatment as well. Cows too sick to produce milk were inappropriately shot with a small caliber weapon," said Taylor. "This led to hours of suffering before expiring of a gunshot to the head."

"This morning I was made aware of an animal abuse video that the group Animal Recovery Mission (ARM) produced and has released to the public and the press. Most of the footage for this video was captured on one of the dairies that belongs to Fair Oaks Farms. While we were made aware a couple months ago of the fact that ARM had gone undercover at Fair Oaks Farms, and had proactively made a statement, we had no idea what kind of footage had been captured or what – if any – abuse had occurred. It is with great disappointment to find, after closely reviewing the released ARM video, that there were five individuals committing multiple instances of animal cruelty and despicable judgment. Of the five, four were our employees and one was a 3rd party truck driver who was picking up calves. Of the four who were our employees, three had already been terminated prior to us being made aware months ago of the undercover ARM operation, as they were identified by their co-workers as being abusive of our animals and reported to management. So, in this instance our policy of cow care training - "see something, say something" - worked. After reviewing the video frame-by-frame, those three employees are responsible for the overwhelming majority of offenses seen in this video. Unfortunately, the fourth employee’s animal abuse was not caught at that same time. Although he underwent another training session in animal care when we discovered there was an undercover ARM operation on our farm, after viewing the extent of his animal abuse, he is being terminated today. As to the individual who worked for the transportation company, today, we will notify the company that he works for and he will not be allowed on our farms again. It is our position that any companies that come in contact with transportation of our animals, should be well-versed in and adhere to our industry’s animal welfare practices which can be found in FARM. Months ago, when I first learned of the undercover activity, I requested a 3rd party review and we went through a re-training process throughout the dairies. While the review came back favorable, I am not letting my guard down and will institute more thorough monitoring and training so that this abuse can never happen again. This video and any future videos will be immediately handed over to the authorities for review and potential prosecution. Regardless, I am disgusted by and take full responsibility for the actions seen in the footage, as it goes against everything that we stand for in regards to responsible cow care and comfort. The employees featured in the video exercised a complete and total disregard for the documented training that all employees go through to ensure the comfort, safety and well-being of our animals. It is a shock and an eye-opener for us to discover that under our watch, we had employees who showed disregard for our animals, our processes and for the rule of law. This ARM video shines a light on an area that – despite our thorough training, employee onboarding procedures and overall commitment to animal welfare – needs improvement. However, as I have stated before, the fact that ARM takes months before notifying owners or authorities regarding on-going animal abuse is concerning. I have personally reached out to ARM’s founder, Richard Couto, to discuss a more symbiotic relationship but he has yet to reach back. A full investigation of all aspects of the video is underway, during and after which disciplinary action will be taken, including termination and criminal prosecution, of any and all employees and managers who have violated either our animal care practices or the law or both. The statement that we grow and sell drugs on our farms is false. The plants featured in the video are an invasive perennial species that is rampant on farms all over the midwest. With that said, I am disappointed to learn of potential drug use on our properties. Months ago, the individual seen smoking by the barn and doing drugs in a truck was turned in by his co-workers to one of our managers. That manager notified local law enforcement about the drug use and, accordingly, a police report is on file. It is with a heavy heart that I prepare this statement today. As a veterinarian whose life and work is dedicated to the care, comfort and safety of all animals, this has affected me deeply. I am disappointed for not being aware of this kind of awful treatment occurring and I take full responsibility for what has happened. I also take full responsibility to correct and ensure that every employee understands, embraces and practices the core values on which our organization stands. I am and will continue to be deeply involved in the resolution of this matter, down to every one of our employees, so that I can guarantee that these actions never again occur on any of our farms."

According to our news partners at RTV6, the Newton County Sheriff's Office has launched an investigation into the alleged cruelty.

A Publix spokesperson released this statement to WPTV:

"We were recently made aware of allegations of animal abuse at a supplier to the Fairlife brand. Like you, we are disturbed by the images and shocked by the cruelty shown toward the animals. Because we are committed to the humane treatment and care of animals, we have reached out to our supplier to discuss these serious allegations. We have been assured that a thorough investigation is being conducted to determine what corrective actions should be taken. We remain focused on collaborating with our suppliers to advance efforts that continuously improve the safety and well-being of all animals."

In addition, Fairlife released this statement about the investigation:

"We have become aware that an animal rights activist group (ARM) went undercover at one of our dairy suppliers, Fair Oaks Farms, earlier this year. ARM has recently released an animal abuse video and held several press conferences to make their findings public. As part of our core values of responsible farming and animal care, we at fairlife LLC are taking this incident very seriously. We and Fair Oaks Farms are taking the following steps: Immediately suspend milk deliveries from the dairy identified in the video to Fairlife; Fair Oaks Farm has terminated the four individuals identified in the video that did not adhere to the farm’s stringent animal welfare practices; As outlined in a letter from Dr. Mike McCloskey at Fair Oaks Farms, they have provided the video to local Indiana law enforcement to review for potential criminal charges against the individuals involved; Fair Oaks Farms commissioned an independent auditor, Food Safety Net Services Certification & Audit (FSNS C&A), recommended by the National Milk Producers’ Federation, to conduct an audit of animal welfare practices at the identified farm. Those results are public and will be made available at www.fofarms.com; Fair Oaks Farms has committed to conduct independent, unannounced and random audits and install video surveillance to ensure the highest levels of animal care are maintained; Until these new assurances are in place, no milk from the dairy in the video will be included in fairlife LLC products. The dairy identified in the video represents less than 5 percent of fairlife’s total milk supply. Approximately 30 dairies support fairlife; therefore, we are visiting all supplying dairies in person and conducting independent 3rd party audits within the next 30 days to verify all animal husbandry practices at the farms, including all training, management and auditing practices. We will also continue to work with Fair Oaks Farms to ensure specific actions are taken to address this situation and uphold our high standards for animal care."

WPTV reached out to Walmart, Target, and Winn-Dixie as well and are awaiting comments back.

The U.S. Department of Agriculture said it's not investigating the incidents because the cows in the videos were not in a federally inspected slaughter facility and therefore not within the USDA's regulatory authority.

However, the USDA did call the actions of those workers "unacceptable."