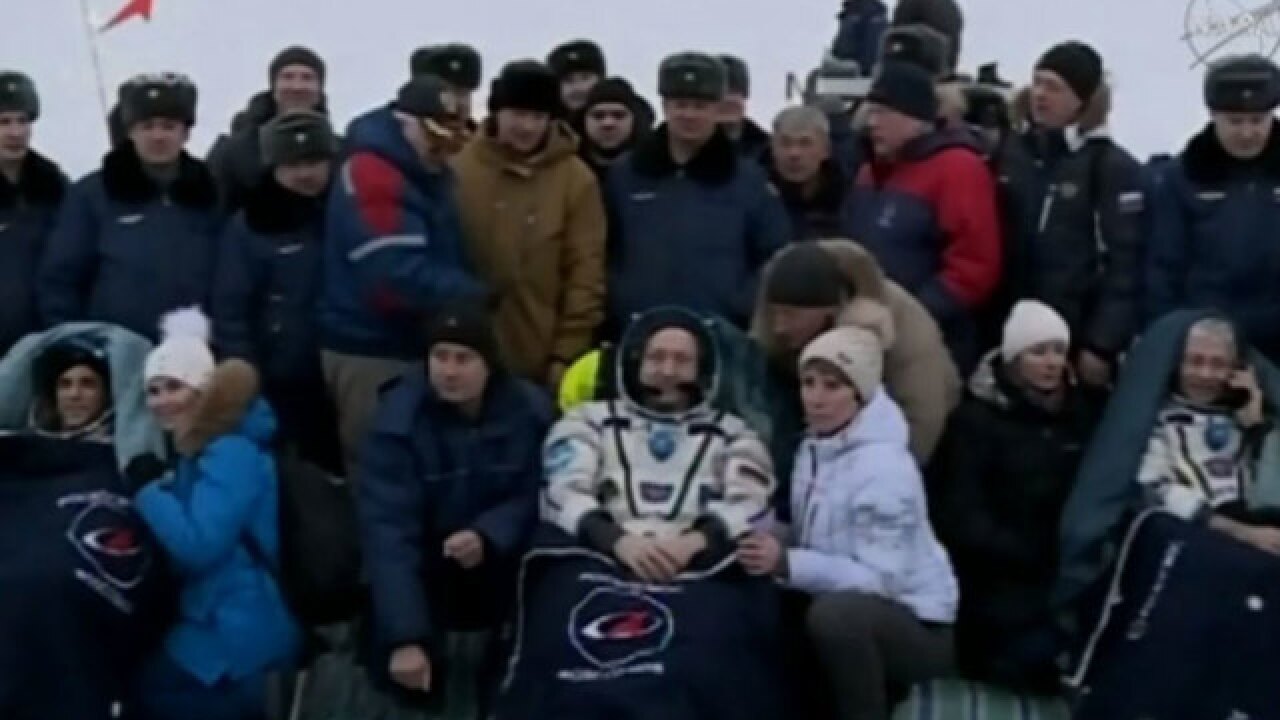 The two Americans and one Russian landed in a Soyuz capsule shortly after sunrise Wednesday, local time, in Kazakhstan, where the temperature was below freezing. Flight controllers feared snow and freezing rain might hamper recovery efforts, but NASA said the weather wasn't nearly as bad as had been feared and the pickup teams got to where they needed to be.

NASA's Joe Acaba and Mark Vande Hei, and Russia's Alexander Misurkin emerged from the capsule one by one, smiling, waving and pumping their fists in the air as they were carried to outdoor chairs. Medical staff wrapped them in thick blankets, while taking their pulse and making sure they were fine.

The astronauts checked out of the space station just a few hours earlier, hugging the three men remaining behind.

In handing over the skipper's job to Shkaplerov, Misurkin joked that at least he and his two crewmates didn't break anything and hopefully accomplished some good science. They'd lived on the space station since September.

Acaba is the first astronaut of Puerto Rican heritage and a former schoolteacher. He teamed up with another educator-astronaut, Ricky Arnold, who's launching in three weeks, to perform the science lessons prepared by Christa McAuliffe 32 years ago. She died in the shuttle Challenger launch disaster.

During a series of spacewalks spanning months, Acaba and Vande Hei helped replace the aging mechanical hands of the station's big robot arm. And last fall, they had a chance to chat with Pope Francis, discussing the beauty and fragility of the home planet.

As is customary, NASA planned to hustle Acaba and Vande Hei back to Houston, with Misurkin heading to cosmonaut headquarters at Star City, Russia.

A replacement crew, including former teacher Arnold, will lift off from Kazakhstan on March 21 and bring the space station back up to a full crew of six.

The Soyuz spacecraft with Expedition 54 crew @AstroAcaba, @Astro_Sabot, and Alexander Misurkin is seen under parachute as they return from 168 days onboard @Space_Station. Check out the first images - https://t.co/hHBKCuDGQMpic.twitter.com/UMVoOUsNKh