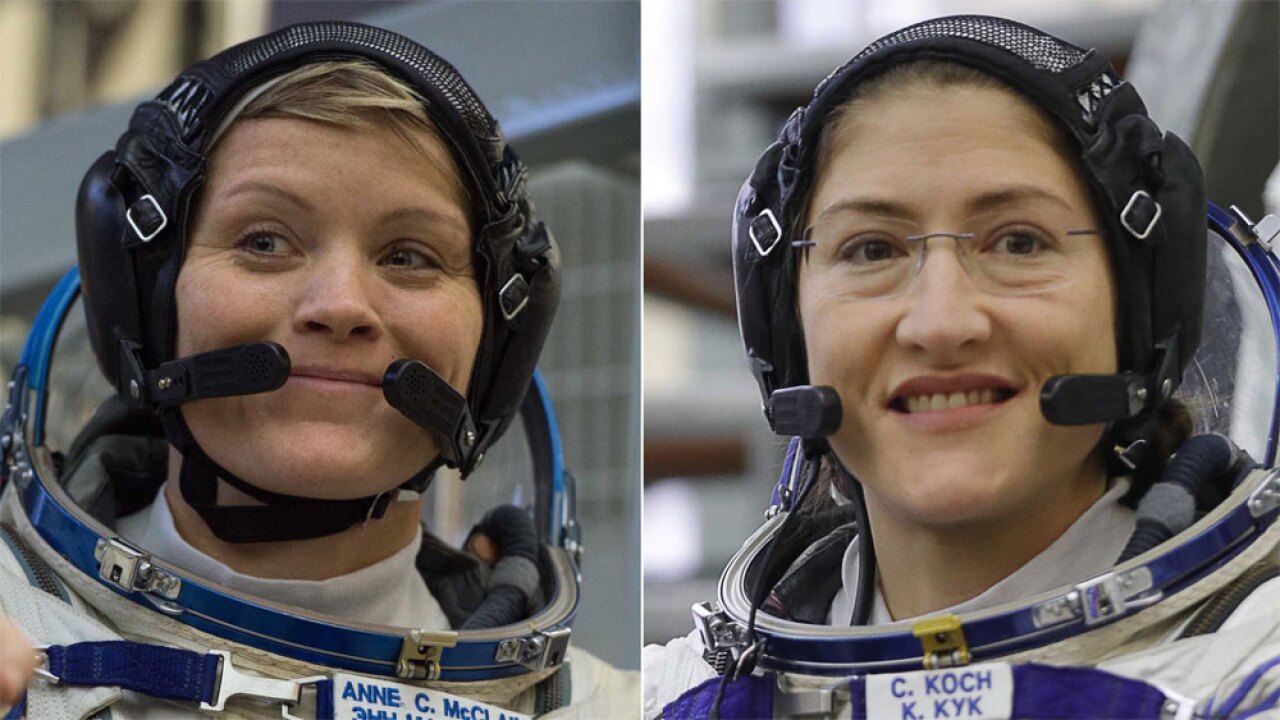 Getty Images
AFP/Getty Images
NASA astronauts Anne McClain, left, and Christina H. Koch will take part in a spacewalk March 29. For the first time in history, an all-female crew will conduct a spacewalk at the International Space Station, NASA confirmed to CNN.

(CNN) -- For the first time in history, an all-female crew will conduct a spacewalk at the International Space Station, NASA confirmed to CNN.

As part of Expedition 59, NASA astronauts Anne McClain and Christina Koch will carry out the spacewalk on March 29. They'll be supported on the ground by Canadian Space Agency flight controller Kristen Facciol, who will be on the console at NASA's Johnson Space Center in Houston.

It was Facciol herself who first tweeted the announcement on March 1, saying: "I just found out that I'll be on console providing support for the FIRST ALL FEMALE SPACEWALK with @AstroAnnimal and @Astro_Christina and I can not contain my excitement!!!! #WomenInSTEM #WomenInEngineering #WomenInSpace."

"As currently scheduled, the March 29 spacewalk will be the first with only women," NASA spokeswoman Stephanie Schierholz told CNN in an emailed statement Wednesday. "It is the second in a series of three planned spacewalks. Anne also will join Nick Hague for the March 22 spacewalk. And, of course, assignments and schedules could always change."

"It was not orchestrated to be this way; these spacewalks were originally scheduled to take place in the fall," Schierholz added. "In addition to the two female spacewalkers, the Lead Flight Director is Mary Lawrence, and Jackie Kagey (also a woman), is the lead EVA (spacewalk) flight controller."

The NASA website shows the spacewalk will last about seven hours.

Both McClain and Koch were part of the 2013 astronaut class, half of which were women, and came from the second largest number of applications NASA ever has received -- more than 6,100. The most recent class of flight directors was also 50% women, NASA said.

McClain is currently on the ISS as part of Expedition 58, while Koch is set to blast off on March 14 to reach the station for Expedition 59 and 60 along with Cmdr. Alexey Ovchinin and Flight Engineer Nick Hague. This is going to be the first time in space for McClain and the first spaceflight for Koch.

Spacewalks are held for a number of different reasons, according to NASA, including doing work outside a spacecraft, conducting science experiments and testing new equipment. Astronauts also conduct spacewalks to fix satellites or spacecraft that are already in space, instead of having them brought back to Earth to fix.