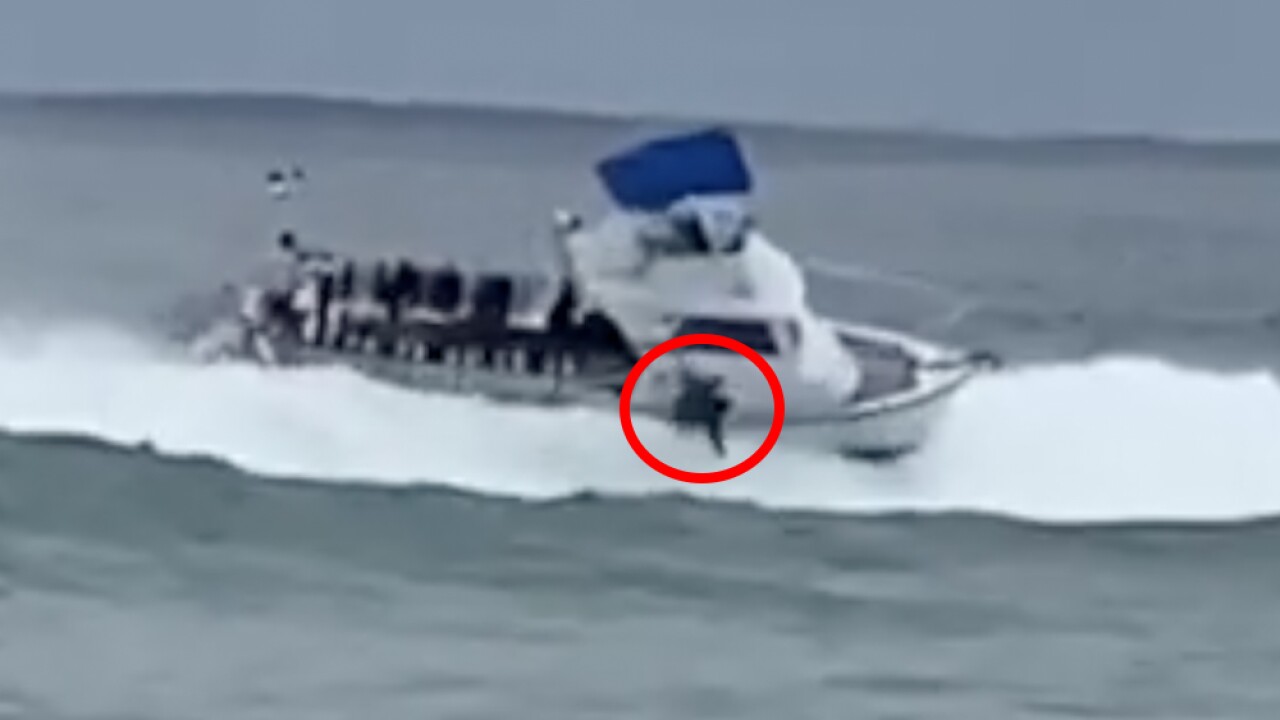 BOYNTON BEACH, Fla. — Dramatic new video shows a man being thrown off a boat after it was rocked by a powerful wave in the Boynton Beach Inlet over the weekend. The video, which was taken on Sunday, shows a large wave slamming into a Starfish Scuba dive boat just offshore, and nearly flipping the vessel over.

James Trub says Sunday morning he went jet skiing with his buddies. They noticed the Starfish Scuba boat heading out with other boats through the Boynton Beach Inlet. The boat was full of scuba diving enthusiasts. But then a large wave rocked the boat.

The conditions were so dangerous, the Lake Worth Beach Pier was on closed Sunday due to strong surf.

"It was caught with going back and going forward to get out of the surf break and he was just waiting for his opportunity and it never came, because the waves kept coming," he said.

"And then the next wave broadsided the boat and it pitched to such a level they were almost horizontal to the water and the captain flew out of the flybridge."

The owner of the boat, Maggie Birdwell, says the crew sprang into action to gain control of the boat as a man who was surfing nearby hopped on board to help. The surfer was also a boat captain.

"Captain Burt thank you so much, who has a lot of experience, he owns the Sea Mist and ran that boat for 30 years. And he did not see anyone at our helm, we have two, so he didn't realize that our divemaster had grabbed the helm downstairs."

Meanwhile, the jet skiers found the captain that went overboard conscious, as a Palm Beach County Ocean Rescue lifeguard swam out to get him.

Maggie said, "He's doing good. He's a little bruised up he dislocated his shoulder but his first question was is everybody safe. We are so grateful for the community in Boynton, how much everyone was willing to help and we really appreciate it."
Scuba divers on board said everyone stayed calm. Steve Joffee was onboard at the time. He's visiting from Utah.

"The crew was amazing, they jumped on the wheel immediately, they got the life ring."

William Drumm visiting from Colorado was also there.

"Coming back in, everyone was thankful that everybody was Ok," he added.

"Safety is our number one priority. We are always checking conditions, multiple other operators had also run that day so it seems as if there was no reason not to."

Good Samaritans in the right place at the right time.

RELATED: Parts of South Florida will feel the 40s this week

A high surf advisory is in effect until 3 a.m. Tuesday, according to the National Weather Service. Forecasters are warning about the danger of rip currents, rough surf conditions, and beach erosion.