Baby can't wait to be born 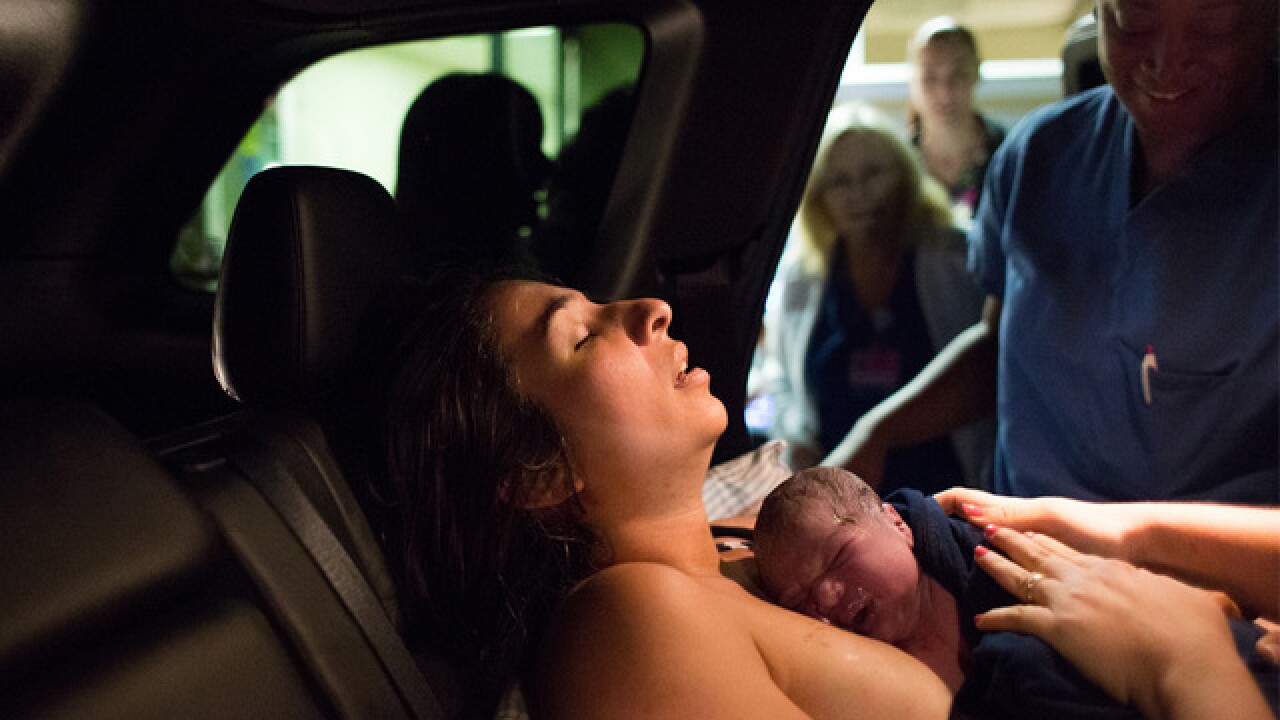 BOCA RATON, Fla. -- Early Thursday morning Paula D'Amore woke up to what she described as intense contractions. It was 1:30. She walked around her house for a few hours. She also called her birth team Doula Lindsey Ripley, her photographer Paulina Splechta and her midwife Christine Hackshaw to let them know labor had started.

About 90 minutes later Paula's contractions were more intense, so she went upstairs to take a hot bath. Splechta had already arrived and was capturing every moment on camera. "I'm in the tub. it's feeling great for about five minutes and then after that I started shaking and the contractions just kept coming back to back," Paula explained. "They were like two to three minutes apart at that time."

Paula got out of the tub and got ready to head to the hospital. The trio hopped in the car, her husband Joseph D'Amore driving, while Splechta continued to snap photos . Paula was already feeling the urge to push and the hospital was still 30 minutes away.

"Maybe two miles down the road we needed to switch from photographer to the Doula because she was having stronger contractions," Joseph recalled. "The atmosphere in the truck was very intense."

Joseph stopped at a Dunkin' Donuts for Splechta and Ripley to switch cars. Paula was still in the back seat and knew her baby was coming.

"I'm sure he was freaked out because I'm screaming at the top of my lungs, moaning because I couldn't control the urge to push," Paula said.

"Just as he pulled up to the front door of the hospital Paula's yelling that there's burning," Ripley explained. "And that can usually only mean one thing."

The baby was here.

"I knew it was go time, she said she had a burning sensation," said Joseph. "I ran in and told security that I needed help now; my wife's in labor. I ran back out to the truck open the door and there was my baby crowning. And all I could do was grab the head and stand there."

Ripley coached Joseph through delivering his daughter until nurses arrived to take over. Splechta, following in a different car, made it just in time.

"My cameras ready," Splechta said. "And I just start snapping away as the nurses and Hackshaw rush to help takeover."

Hackshaw pulled up to the hospital and ran to Paula's car.

"I made it just in time to deliver the rest of the baby," Hackshaw said. "The head was already out. I just delivered the baby like you would do. Happy story."

"It was beautiful to have my daughter make a grand entrance the way she did," Joseph said. "I'll never forget it."

Baby Daniella is the first baby Hackshaw delivered the parking lot of Boca Raton Regional Hospital . "We've delivered babies in the registration area. In the elevator. Just outside the elevator. In wheelchairs," Hackshaw said. "We do it where we have to."