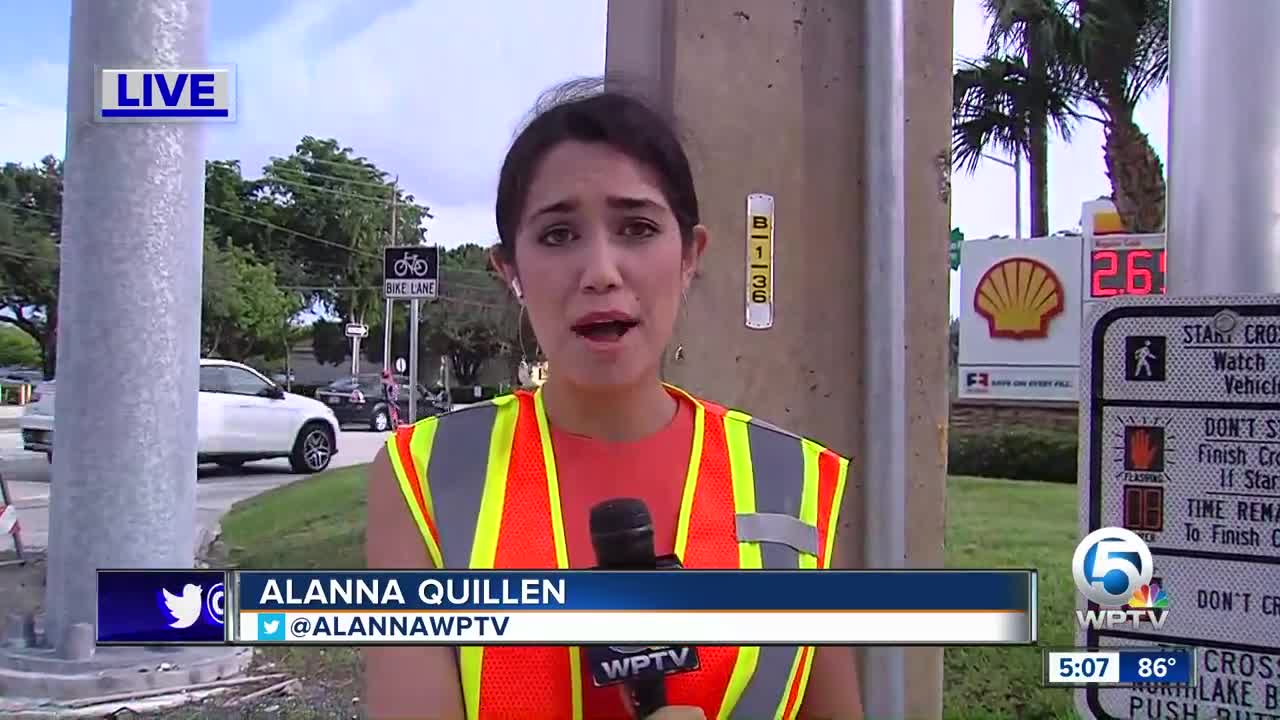 PALM BEACH GARDENS, Fla. -- A woman is still fighting for her life after getting hit by tractor trailer while crossing the street in Palm Beach Gardens.

Police said 24-year old Melissa Krupp was crossing east across Military Trail at Northlake Boulevard when she was struck by a semi-truck. Police said Krupp sustained critical injuries and was transported to Saint Mary’s Medical Center for treatment.

Her family is asking the community for prayers as she fights to daughter is fighting to live.

While police are still investigating how it happened, WPTV received a tip that the crosswalks are not working there -- highlighting a bigger issue of safety in the area.

We found a number of issues at the intersection, from construction, to closed sidewalks, and even some crosswalk signals not working properly.

FDOT said they are the assisting Palm Beach County traffic division on a project to add lanes and replace traffic signals at the intersection. The project began in December 2017.

Kevin Dalton has worked in this part of Palm Beach Gardens for 30 years. He owns a gas station on the corner of the intersection and said the traffic frenzy worries him so much, their cameras point outward to capture any incidents.

“Several crosswalks are not working, sidewalks are closed. It’s a dangerous situation," he said. "Construction is taking a lot longer than it should have, we’ve heard of delays.”

"Still should not have happened, based on what video evidence I saw," he said.

In the video, you can see his employee, Will Kline, running outside to call 911.

Kline said the intersection is too chaotic.

“People rushing and people not paying attention," he said. “Just people being more agitated and trying to run red lights.”

Because of the issues, Kline and other employees help disabled customers in crossing the street. They usually help a blind man cross over on a daily basis but the recent crash has them thinking of other options.

"Since the accident, we’ve been driving him to his next point rather than having him walk," said Dalton.

After walking through the intersection with Kline on Friday, we noticed that some crossing signals worked, while others didn't. Despite pushing the button multiple times, the signal wouldn’t change.

Pedestrians we spoke to experienced the same issues, saying that traffic lights cycled through several times and the crossing signal remained the same. People said they had to proceed with caution after waiting several minutes for no crossing signal.

It’s also important to note that the same crossing signal the victim used in the crash functioned properly on Friday. Two of the signals work, while two others didn’t. Another portion of the intersection is closed off to pedestrians altogether due to the construction.

We called FDOT and Palm Beach County traffic division to report the malfunctions.

They couldn’t say why the signals weren’t working but added that they asked the contractors to fix the signals because they’re in charge of them during construction.

County officials said construction at the intersection is expected to be complete at the end of October, weather permitting.

Dalton hopes in the meantime, drivers and pedestrians will be extra careful in the area.

“Drivers need to be cognizant of their surroundings, staying off their phones, no texting,” he said. “Be much more careful right now, especially with pedestrians, bicycles and so forth.”