Doctor in ICU first to use Hemolung machine 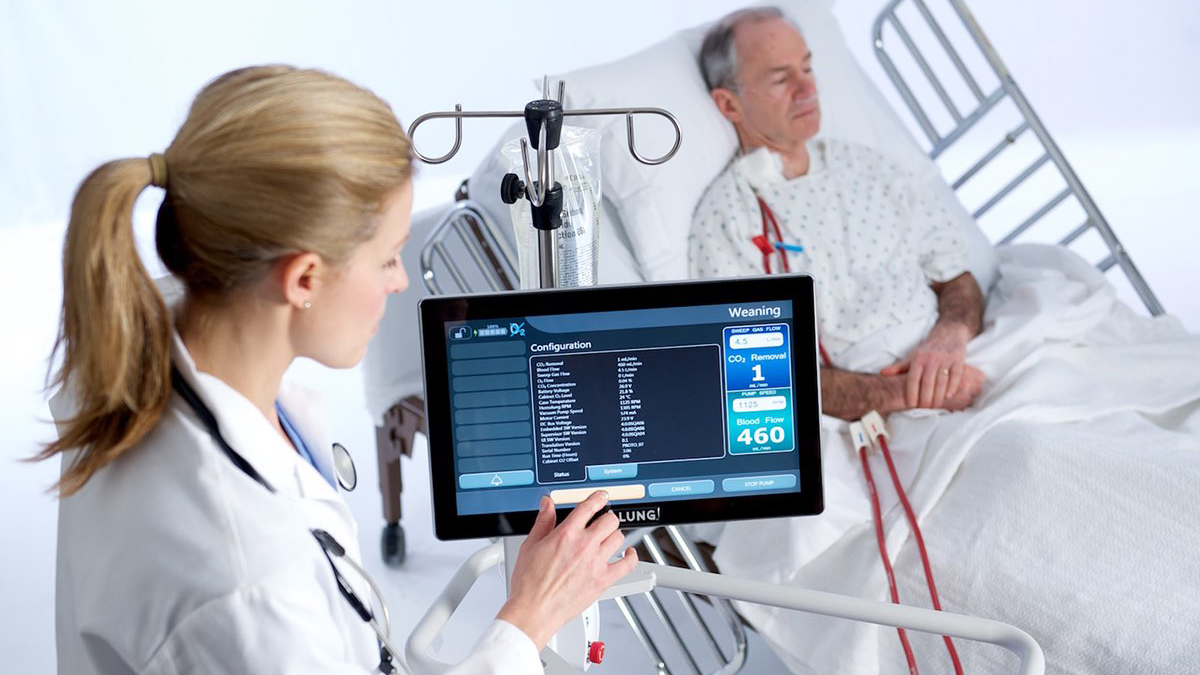 Palm Beach Gardens Medical Center is the only hospital in the state of Florida with a newly approved tool to treat patients fighting COVID-19.

PALM BEACH GARDENS, Fla. — Palm Beach Gardens Medical Center is the only hospital in the state of Florida with a newly approved tool to treat patients fighting COVID-19.

It’s called the Hemolung machine. A doctor in the intensive care unit is the first coronavirus patient at Palm Beach Gardens Medical to be hooked up to it.

Dr. Vladimir Laroche has been on a ventilator for 21 days. The ventilator had been working at 100%, meaning it was doing all of his breathing for him, until doctors got quick approval from the Food and Drug Administration to hook up the Hemolung machine. His brother, Paul Laroche, says he saw immediate improvement.

“I signed off on it, they ordered it and as soon as they put him on it, his levels of carbon dioxide, which were pretty high consistently, started to sort of lower. From that point on, he’s been able to stay at that lower level since they installed it,” said Paul Laroche. “Literally within 12 hours of installing it, it started showing very promising results."

The Hemolung device functions basically like a dialysis machine, but for the lungs. It removed carbon dioxide from the blood and replaces it with oxygen. It was originally developed to treat people with COPD and it has now gotten emergency authorization from the FDA to treat lung failure caused by COVID-19.

“As soon as he went on the machine, things started turning around. His CO2 levels remained between 34 and 40, where they were in the 60s and 70s before. Normal is about 35-40 and so it made a huge difference,” said Dr. Leslie Diaz who is an Infectious Disease Specialist and part of the medical team caring for Dr. Laroche.

Dr. Vladimir Laroche is a doctor at FoundCare in Palm Beach County. His brother believes he contracted COVID-19 while seeing patients. He has been in the hospital since April 1 and was able to take the first breaths on his own after doctors started using the Hemolung alongside the ventilator.

Dr. Diaz is a colleague of his at FoundCare and is now on the team caring for him along with Dr. Ribal Darwish. She credits Darwish for thinking to incorporate cutting edge technology into Laroche’s care plan. She says it would not have been possible without the Tenet Healthcare Administration’s support of its physicians.

“Novel viruses like this, sometimes we are in the dark and we don’t know where to turn to. And we need people like him, where they’re willing to take a theory and put into practice in order to be able to help people,” said Diaz speaking of Darwish.

“Those are people that I believe to be heroes for me,” said Paul Laroche about the medical team caring for his brother.

Laroche says he talks with them multiple times per day and thanks the medical staff at Palm Beach Gardens Medical Center for thinking outside the box as they do everything they can to save his brothers life.

Palm Beach Gardens Medical Center has two Hemolung machines and they’re hoping the device will continue to be helpful in treating other patients battling COVID-19.