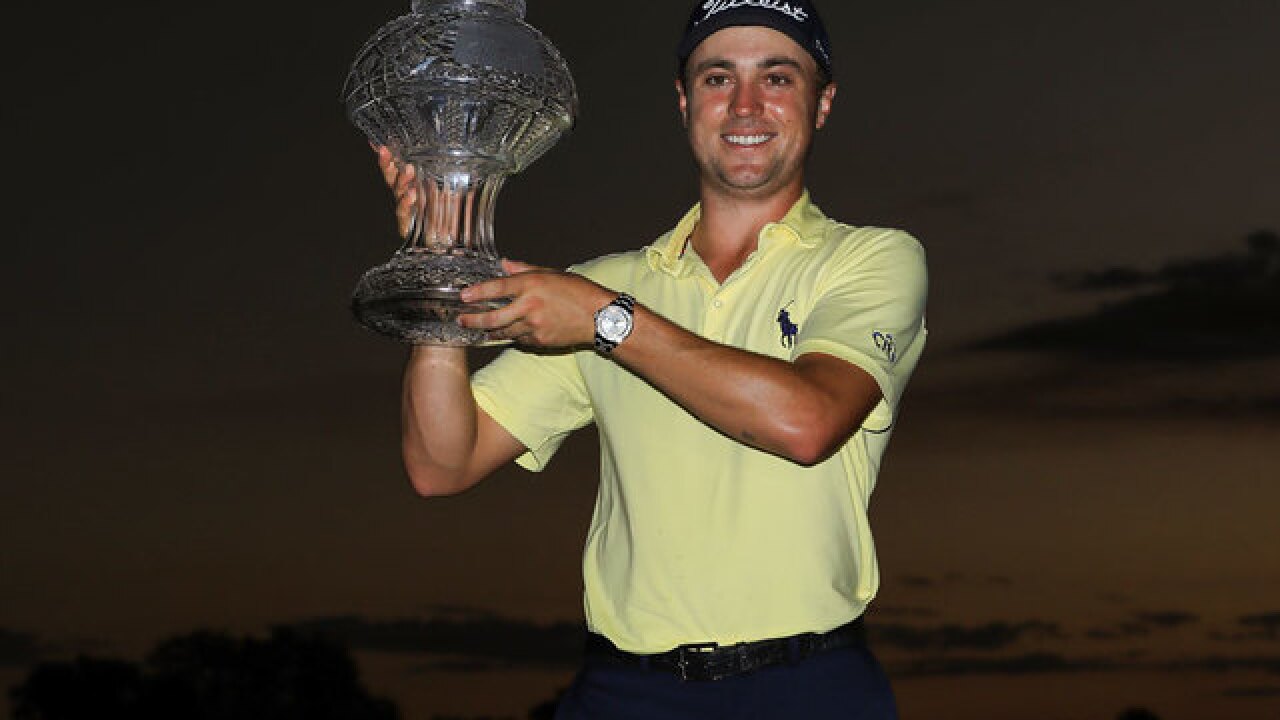 Image copyright 2018 Getty Images. All rights reserved. This material may not be published, broadcast, rewritten, or redistributed.
&lt;p&gt;Justin Thomas poses for a photo with the winner's trophy after winning a playoff during the final round of the Honda Classic at PGA National Resort and Spa on February 25, 2018 in Palm Beach Gardens, Florida. (Photo by Sam Greenwood/Getty Images)&lt;/p&gt;

PALM BEACH GARDENS, Fla. (AP) — Justin Thomas was down to his last chance when he delivered his most clutch shot of the final round in the Honda Classic.

Turns out he wasn't finished.

Thomas nearly holed a gap wedge on the par-5 18th hole for a birdie to force a playoff with Luke List. Moments later, he hit 5-wood over the water, urged it to keep going and lost it momentarily in the darkening sky over PGA National.

"All I was looking at was the water to see if it splashed," Thomas said. "And it didn't. So I figured I was in the bunker, and then people started clapping and I could kind of see some little white dot on the green."

That set up a two-putt birdie that made him a winner when List, who hit his own bold shot in regulation to the 18th to set up birdie, could only manage par in the playoff.

Thomas closed with a 2-under 68 and won for the second time this season. He also won in a playoff at the CJ Cup in South Korea last fall. With eight career victories, including seven in his last 31 starts on the PGA Tour, he moved to No. 3 in the world. He is one spot ahead of longtime friend Jordan Spieth for the first time, which was of little significance to Thomas.

"Not really," he said. "Because there's still two more spots that I want to climb.'

List, going for his first PGA Tour victory, shot 32 on the back nine and closed with a 69. His only regret was a tee shot wide right in the playoff that landed amid palm trees and left him little options. He went left against the bleachers, and hit a superb approach to about 25 feet and two-putted for par.

"Obviously, it hurts right now," List said. "But I think that when I look back on it, I'll be proud of the way I hung in there."

Alex Noren (67) finished third. He was tied for the lead when he went for the green on the 18th, only for the ball to hit hung up on the side of the collar of a bunker, leaving him a tough chip. He missed a birdie chance from 20 feet.

Tiger Woods was briefly within three shots of the lead on the front nine. He closed with a 70 and finished 12th.

The 5-wood turned out to be the winner for Thomas. The wedge made it possible.

Jack Nicklaus was in the broadcast booth for most of the final round, leaving before Thomas and List reached the 18th hole. It might have all looked familiar to Nicklaus, the U.S. captain of the 1983 Ryder Cup at PGA National. The big moment that year was Lanny Wadkins nearly jarring a wedge on the 18th hole, a shot so meaningful to the outcome that Nicklaus kissed the divot.

Thomas missed the 18th fairway in regulation and had no choice but to lay up. List followed with his 4-iron to 35 feet.

"I have a lot of confidence in my wedge game," Thomas said. "I knew if I got a decent number that I was going to be able to get inside 10 feet. That's all I wanted was a chance to try to get into a playoff. And then ended up hitting a great wedge."

Thomas and List finished at 8-under 272. It was the seventh playoff in 15 PGA Tour events this season.

Woods made that Sunday red shirt look a little brighter, at least for a while. With an 8-foot birdie putt on the par-4 eighth hole, he momentarily pulled within three shots of the lead. That only lasted the few minutes that it took Thomas to tap in for birdie on the par-5 third.

Woods made bogey to close out his front nine, and he still was four shots behind until getting swallowed up again by the water-filled closing stretch. He put his tee shot into water and made double bogey for the second straight day, three-putted the 16th for bogey and was out of hope.

"I made a big leap this week because I really hit it well," Woods said. "I was able to control it, especially in this wind, which is not easy to do."

Woods led the field in proximity to the hole on his approach shots at just over 29 feet.

Not to be overlooked was Sam Burns of LSU, who last year won the Jack Nicklaus Award as the top college player who received a sponsor exemption. Playing alongside Woods in such a chaotic arena, he was bogey-free for a 68 to tie for eighth. That will get him into the Valspar Championship at Innisbrook in two weeks.

Five players had at least a share of the lead. Only three of them stuck around until the end.

Webb Simpson missed the fairway on the 11th hole and had to lay up instead of taking on the water. That led to the first of three bogeys in a four-hole stretch and sent him to a 72, four shots behind. Tommy Fleetwood was tied for the lead until a three-putt bogey from long range on the 14th, and a bogey from the back bunker on the 15th. A birdie on the final hole for a 69 left him two shots behind.