A hole in Jupiter is now being filled with new excitement. 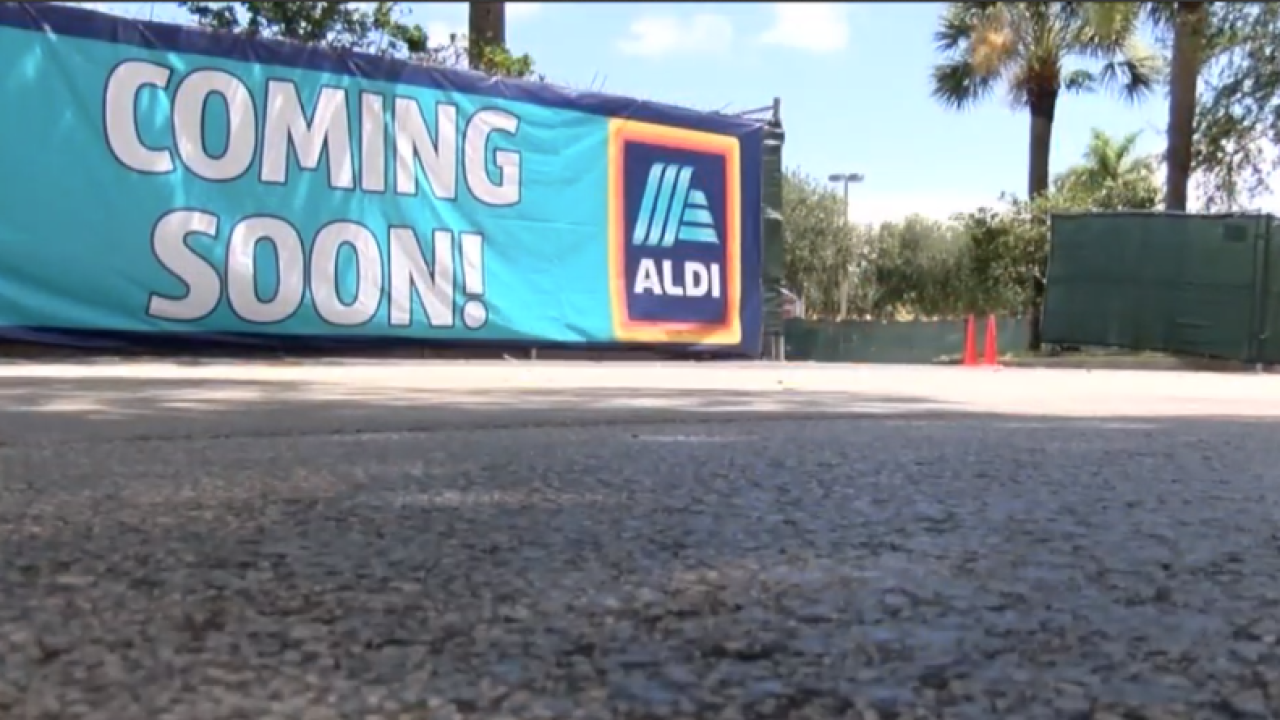 JUPITER, Fla. — What once was an empty space in Jupiter is now being filled with new excitement.

The Winn Dixie on Indiantown Road closed about two years ago and has been closed ever since.

But now, a popular new supermarket is filling the void and generating a lot of buzz.

You can see a giant sign hanging outside of the site at Jupiter West Plaza, with the message COMING SOON and the Aldi logo next to it.

Aldi is a German-based supermarket chain specializing in discounted foods and other grocery items.

The company bought nearly more than 45,0000 square feet of space at the old Winn Dixie site and are only using about half of it since Aldi stores typically have a smaller layout. The rest of the space will be subleased, which means even more business opportunities for the area.

Jupiter residents have been talking about the changes for months including Parry Bolognese, a regular at Vinny’s Pizza next door to the site.

“It was a sore eye!” he joked, adding that seeing the vacant Winn Dixie shell was sad but he said he and his wife, who both live just behind the shopping center, will finally have a grocery store to go to without driving through heavy Jupiter traffic.

“They’ve got really good prices and I’m glad they’re coming to this center, they need something like that up here,” he said.

“This is a growing community. North of Indiantown and especially West Jupiter is extremely hot right now for development. And the cool thing about it is that it will be going into this plaza, that’s filling a hole right now,” she said. “It’s a grocery store replacing a grocery store and Aldi has a fantastic reputation.”

As a mom, a business owner and Jupiter resident herself, she said that the new growth is providing more options for her family and others in a part of town that needs it.

“As a mom, this area, in particular, is kind of limited with the options,” she said. “It kind of messed with a lot of our workflows as moms, because a lot of us went to Winn-Dixie and now we have to cross the light, cross the street and head down to Publix.”

Meyers Lucas explained that real estate search engines and sites incorporate how many grocery stores and other amenities are in the area when giving certain scores to neighborhoods.

“For example, right now we only have Publix and Publix in the global picture of what is available immediately surrounding the homes just north of Indiantown and above Island Way. So having Aldi is fantastic to adding to the valuation of homes,” she said. “This has been kind of a hole for the last two years and as a realtor, it’s been difficult for us to set the narrative of what this area looks like.”

Aldi told WPTV in a statement that the store will be opening very soon.

"ALDI is committed to providing Jupiter shoppers with high-quality food and products at affordable prices. We will reach out once we have additional information to share," said spokesperson Chris Hewitt. "As part of our expansion efforts, we are constantly evaluating new markets. We’re a national store, with more than 1,900 stores in 36 states. We plan to increase our store count to 2,500 by the end of 2022. By then, we will help as many as 100 million people save money on groceries every month and be the third-largest U.S. grocery retailer by store count."

Judy Nagy said if they ever ran out of bananas or milk, it was easy to walk to Winn Dixie and now, they’ll be able to walk just next door to get what they need.

“I’m really excited about it,“ she said. “I think it’s going to bring in a lot of new customers and be a new place to do grocery shopping.”

Restaurants like Cheeseburgers and More had to drive through heavy traffic to get to Public or Walmart for essentials, which can add up to a 30-minute trip. They’re also looking forward to convenience and hopefully more customers with a void in the shopping center now filled.

We also learned from the Town of Jupiter that applications have been put in for possible development west of the site at Indiantown Road and Interstate 95.

It’s currently unknown what those developments could be but it will go before council this fall.