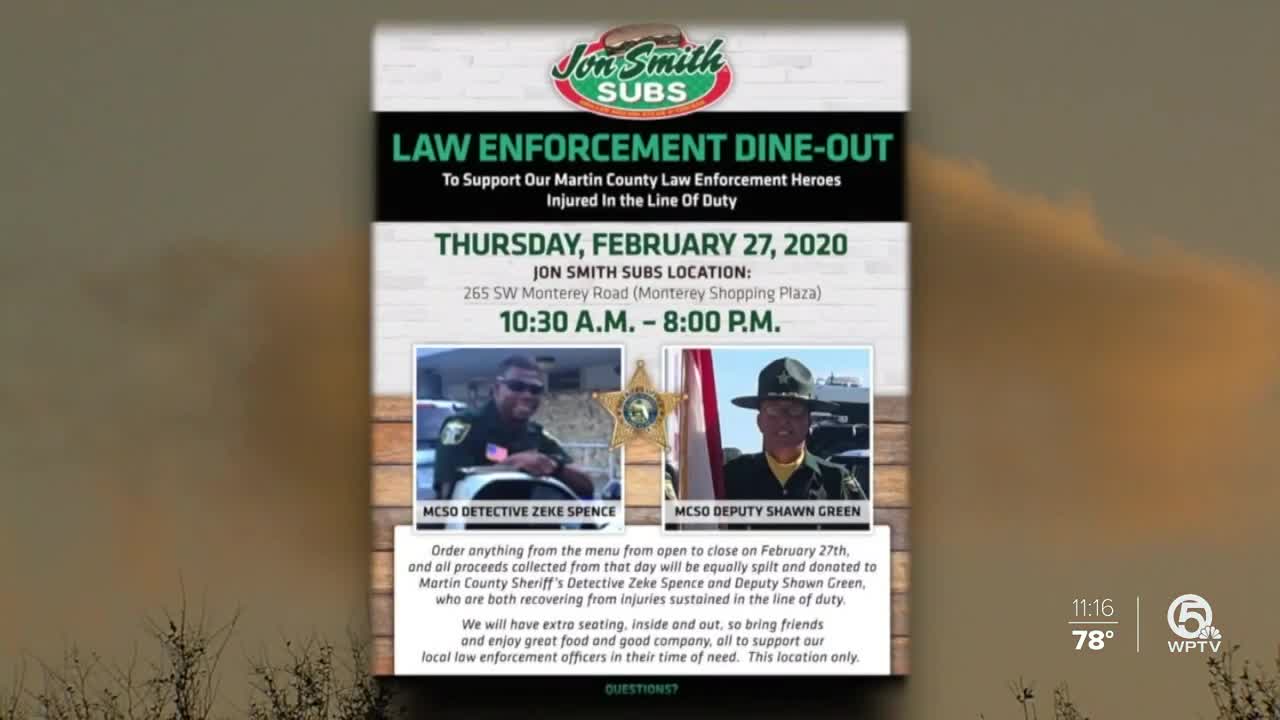 Two Martin County deputies are recovering from injuries sustained while serving their community. Now, the community is returning the favor and raising money to support them through their recoveries.

Now, the community is returning the favor and raising money to support them through their recoveries.

“If I had the chance, I’d do it again tomorrow. I'd just hope the outcome was different,” Spence said.

On April 22, 2019, Spence said he was part of a team cracking down on drugs in Hobe Sound. They were searching for people selling drugs, using drugs, and potentially contributing to overdoses.

Within seconds of pulling into a community near US 1 and Pettway Street, Spence said his team saw a car drive away quickly.

“It was suspicious to us because when we target these areas, we see people come in and out and quickly leave the area,” Spence described.

Detectives pulled the car over to see who was inside and they searched the vehicle for drugs. Spence said the driver took off running. Spence ran after the suspect.

“We ended up tussling and going to the ground. After we got him in handcuffs, I couldn’t move and I realized something was wrong. My partner actually felt my pant leg and my bone was sticking out,” Spence said.

He broke his leg in multiple places and has had four surgeries. He wears a leg brace daily. He goes to physical therapy twice a week.

The hardest part, he says, is being on light duty and not back in the mix with his team.
“I miss it, I miss it dearly,” Spence said.

Deputy Shawn Green is recovering from being hit by a car in late January. Green was off-duty and assisting a crash victim on State Road 714. A second crash occurred, seriously injuring Green. His family says he sustained severe facial injuries and multiple broken bones. His jaw is wired shut and will be for seven more weeks. He is recovering at home with family. He faces a long recovery with more surgeries.

“As law enforcement officers, we make most of our living off overtime. Both of us being hurt, we’re unable to do that. Who knows how long for Deputy Green, but for me, it’s almost been a year,” Spence said.

Scott Stuck, the owner of Jon Smith Subs in Stuart, said he was compelled to do something to help the deputies.

He said he called the Martin County Sheriff’s Office after learning of the death of Florida Highway Patrol Trooper Joseph Bullock.

That’s when he said the Martin County Sheriff’s Office told him about Green and Spence.

He decided to organize a ‘Law Enforcement Dine-Out’.

On Thursday, January 27, from 10:30 a.m. to 8 p.m. all proceeds from the Jon Smith Subs location at 265 SW Monterey Road will Benefit Green and Spence.

There will also be a fundraiser for both men on March 1 at the Piper’s Landing Clubhouse. The ‘Hometown Heroes’ BBQ runs from 6 to 9 p.m. Tickets are $25.