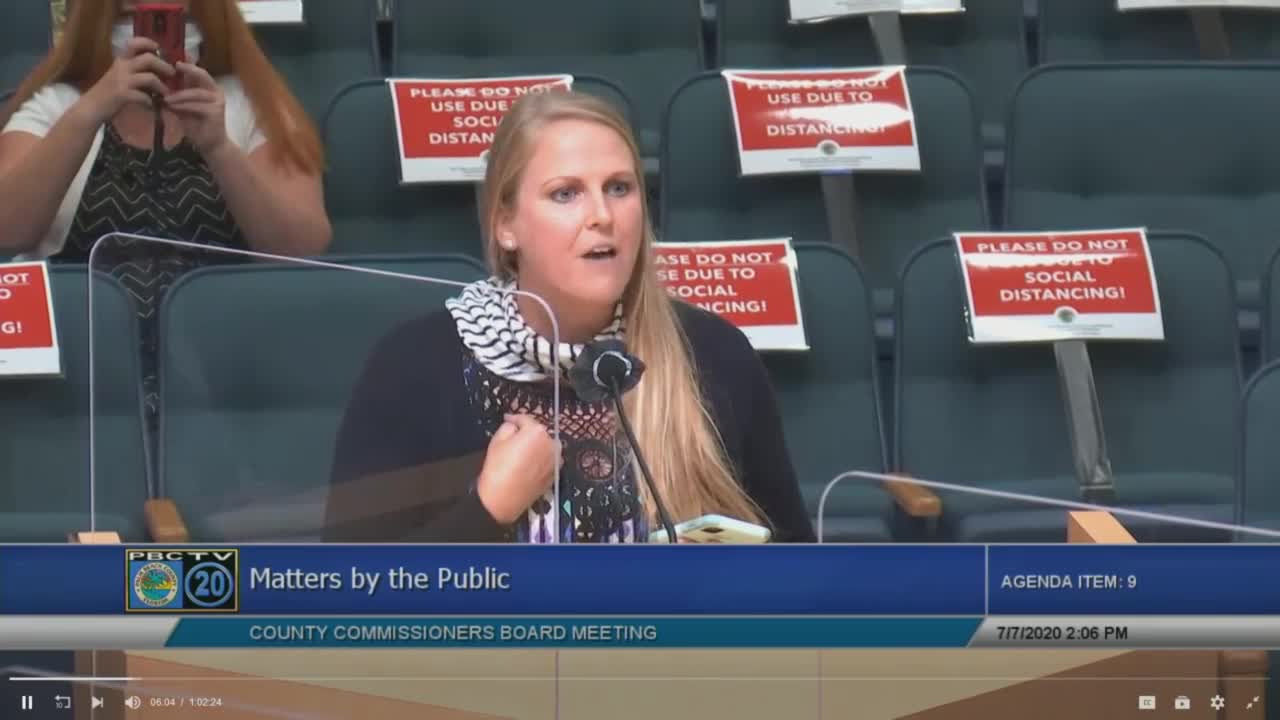 A woman accuses Palm Beach County Mayor Dave Kerner of holding up a piece of paper that says "WTF" during her public comments.

WEST PALM BEACH, Fla. — A woman who spoke during Tuesday afternoon's public comments in front of Palm Beach County commissioners accused Mayor Dave Kerner of holding up a piece of paper with the words "WTF" on it while she was at the podium.

Jean-Marie Nacer was a few minutes into her speech, berating Palm Beach County's dissemination of health data during the coronavirus pandemic, when she abruptly stopped.

Although the writing on the paper couldn't be seen on camera, Kerner didn't deny it.

"This is a record from our counsel, and it has nothing to do with you," he told her.

Nacer accused Kerner of smirking at McKinlay while holding up the piece of paper.

"During my speech, you're holding up a sign that says 'WTF,'" Nacer said. "That is disrespectful."

Kerner apologized to Nacer for interrupting her, but she wasn't having it.

"If I can just clarify something," she said. "That was from me to the mayor. It was nothing to do with this proceeding."

When Nacer demanded to know why it wasn't being shown for all to see, Nieman replied, "Because it's not a public record."

Nacer continued to press Kerner on the issue.

Kerner gave her an additional 30 seconds to finish her speech, which Nacer concluded by once again chiding him for holding up the "WTF" paper.

As she returned to her seat, Kerner brought it back to the topic of her public comment.

"I just wanted to let you know that the data you're referring to, I believe, is held by the Department of Health, and that's a function of the governor's office," he said.

It was the second time during the meeting that Kerner had been at odds with a member of the public.

Earlier in the day, Kerner asked a woman to leave the commission chambers after she repeatedly refused to wear her mask, despite several warnings.

Kerner provided a statement Wednesday to WPTV NewsChannel 5, along with a picture of the paper in question.

"The county attorney printed me a new copy of the BOCC rules because I used hers earlier in the day. She delivered a new copy with this humorous preprinted note pad attached to it. I raised it during the meeting to show her I received it. A lady was testifying at that time about why masks don't need to be worn. She became very upset. She thought I was holding up a 'wtf' sign in reference to her anti-mask position. I was not. I apologized to her for the confusion. This is a copy of the preprinted sticky note."

Nacer later told WPTV that Kerner's explanation proves he "wasn't even listening" since she didn't mention masks during her speech.