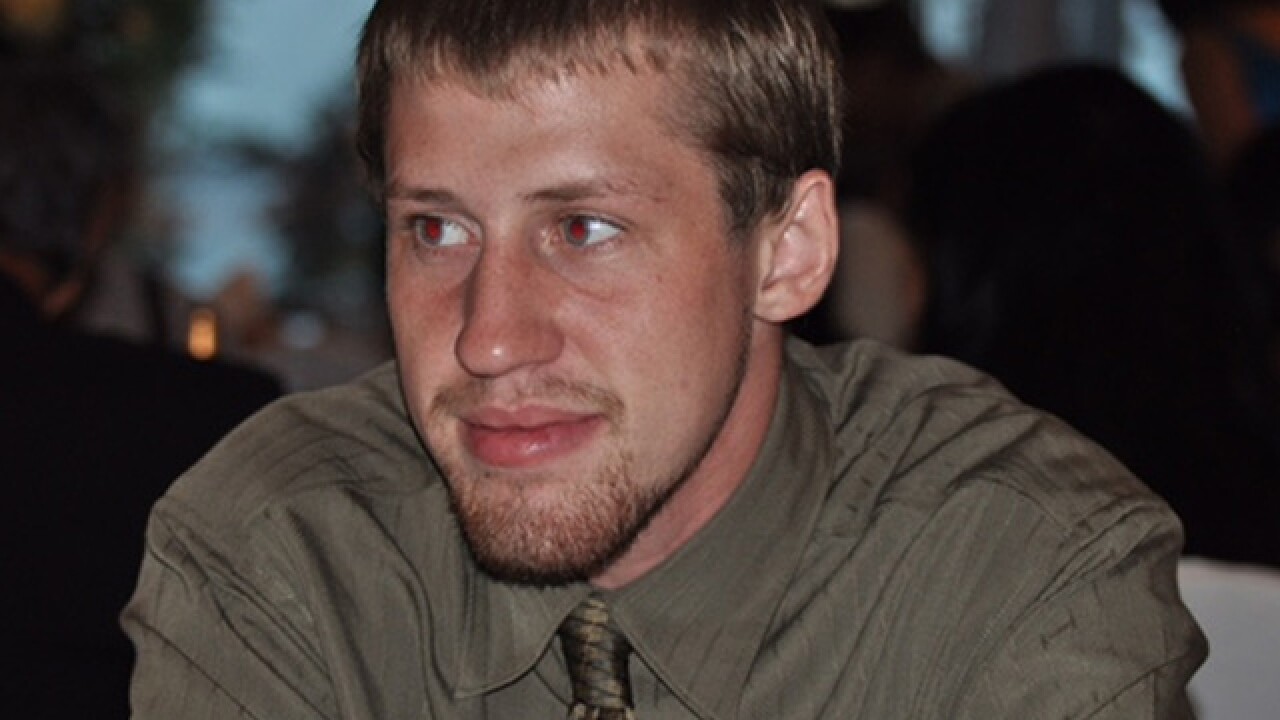 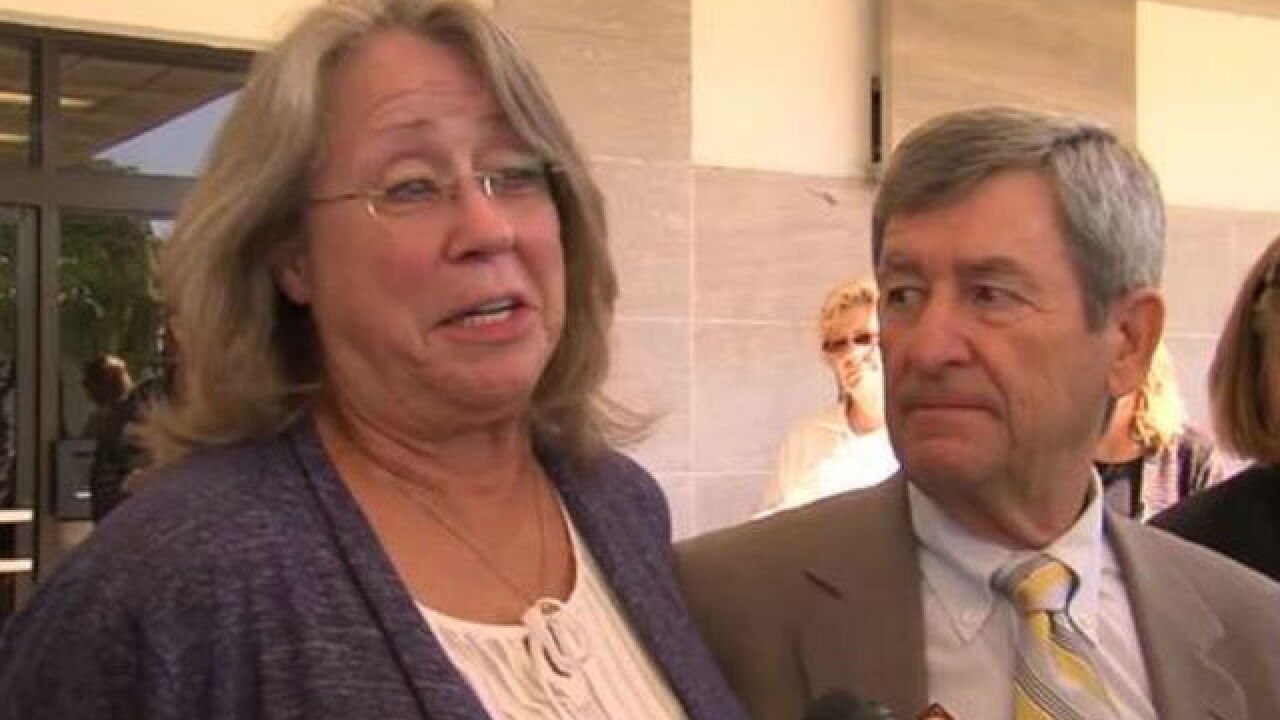 UPDATE:  On March 30 at the United States Courthouse in West Palm Beach, a hearing will be held to discuss the scheduling of a new trial.

An emotional promise from Lydia and Richard Adams, to their son, 24-year-old Seth Adams.

Wednesday, US District Court Judge Daniel Hurley had no choice, but to call a mistrial in the civil case of Sergeant Michael Custer. Custer shot and killed Adams on May 16, 2012.

The jury of 9 had been deliberating since 3 p.m. Monday, but finally said Wednesday afternoon, they could not reach a unanimous decision.

Initially it was reported that 7 jurors ultimately felt Custer used excessive force when he killed Adams and that 2 could not agree.

The attorney for Seth's parents later said a juror came to his office and said the verdict was actually 8-1 in favor of excessive force. 1 juror would not budge from the beginning.

Moments after the mistrial was declared, Lydia and Richard Adams said if it comes down to it, they will go to trial again, in search of justice for their son.

"Seth was a good good young man, good as a little boy, good as a man, he had character, he was just a stellar human being and I'm proud of what we accomplished raising our child and I'm proud of the choices he made throughout his life. That's the part we want honored," said Lydia.

Both the Adams thanked the jury for their month-long attention, but admitted they were disappointed in the decision. The Adams also thanked the grace of God, and their attorneys, Wally McCall, Stephen LeClainche and Tatum Whidden.

"We are grateful that Seth's story has been told and we look ahead to trying this case again."

Custer claims Adams choked him that night, when Adams tried to get Custer off his family's property. Custer maintains he thought Adams was trying to grab a weapon from his truck, so he shot him.

But Wednesday, Lydia and Richard Adams did not mince words. They believe Sergeant Michael Custer is lying about what happened. Throughout the trial, the Adams family pointed to physical evidence they said contradicted Custer's version, arguing it was nothing but "a web of lies." A blood trail, bullet casings and a bullet fragment — contradicted Custer’s account.

They also criticized PBSO's investigation into the shooting, which they believe was a cover up. During the trial at one point, Judge Hurley himself called the investigation "slipshod and shoddy, a disgrace," because of certain evidence that was not collected and inconsistencies in Custer's statement, an investigator testified did not need to be reconciled.

In fact, eight of the nine jurors agreed Custer had acted in bad faith and intentionally destroyed his department-issued cell phone to prevent its damning text messages from being revealed.

"The investigation was a joke. It was a cover-up,” he said. “They botched the whole investigation and they did it on purpose," said the Adams' attorney, Wallace McCall. He felt the 7-2 vote  "sent a loud and clear message” to the sheriff’s office. “

"Glory to God the father for this has been and continues to be, a spiritual battle against the forces of evil," said Richard Adams.

"PBSO has repeatedly shown their inability to be honest, truthful, to conduct a proper investigation, not just in our case but multiple cases," said Lydia Adams.

Both Custer and his attorneys would not speak to the media, following the mistrial.

The Adams have started a foundation in Seth's name, at sethadamsfoundation.org. They encourage families who faced similar situations to contact them. They want to create a network and among other things, help families that need it, find competent attorneys to fight these kinds of cases.

"After trial ended I just thought, now maybe I can wake up from this nightmare. I don't know. I think it will always be a hard thing to overcome but I want to find good in this," said Lydia.

The sheriff's office released a statement following the mistrial:

First and foremost there are no winners in this civil trial.  The Adams Family lost a son, and Sgt. Custer and his family have endured a great deal of stress and emotional pressure.  No one wants this to happen to any family.

It is disappointing that the jury could not reach a verdict today. Sgt. Michael Custer has worked as a law enforcement officer for approximately 24 years.  He has served this community proudly and honorably. He worked as a tactical agent for approximately 3 years, performing undercover operations.  The unfortunate tragic encounter on May 16, 2012, resulted in Sgt. Custer’s use of deadly force when he reasonably believed his own life was in jeopardy.

The investigation of Sgt. Custer’s actions was reviewed by the Florida Department of Law Enforcement, which took several additional statements in the case and determined that the Palm Beach County Sheriff’s Office investigation was sufficient, thorough and in conformance with generally accepted investigative procedures.  In addition, the Florida Department of Law Enforcement noted that when they investigate officer involved shooting incidents they require the State Attorney’s Office to make the final determination on whether to file criminal charges against the involved officer.  Furthermore, the State Attorney’s Office, which employs its own law enforcement investigators, who were present at the scene during the several stages of the investigation conducted by the Palm Beach County Sheriff’s Office, concluded that Sgt. Custer’s use of deadly force was justified.

The primary issue the jury in this civil trial was attempting to reach a verdict on was whether Sgt. Michael Custer intentionally used excessive deadly force upon Seth Adams on May 16, 2012.  The Court properly dismissed the Plaintiff’s civil rights claim against the Sheriff’s Office before trial because there was no evidence to support a claim that the Sheriff’s Office’s customs, policies, practices and procedures could have caused the use of excessive deadly force in this case.  As a result, the jury was not asked to decide any claims against the Sheriff’s Office regarding its customs, policies, practices or procedures related to officer involved shootings.

It is unfortunate that the jury could not reach a verdict today.

On the third day of deliberations in the civil trial against Palm Beach County Sheriff's office Sgt. Michael Custer a jury said it was deadlocked on two issues and couldn't reach a verdict.

On Wednesday, the judge read them what's called an Allen charge, and told the panel it has to go back into deliberations and find for the plaintiff or the defendant.

Seth Adams was shot and killed by deputy Michael Custer in May of 2012, outside of his family’s nursery in Loxahatchee.

The jury has to decide whether Custer was responsible for losing his cellphone, and if he did so in bad faith.  At 10:50 a.m., the jury said they had reached a verdict on the cellphone charge.

Minutes later the jury came back and said they had not reached a verdict on the cellphone charge.

They also said they could not reach a verdict on whether Custer used excessive force.

The judge instructed the jury to go back into deliberations. He told them this was an important case that took time, effort, money, emotional strain, and if they fail to reach a verdict the case remains open.

The judge said it's unclear if this case was tried again it would be argued any better or more exhaustively then it was before.

The judge reminded the jury that they must not give up honest beliefs, but if a majority is for one party, those holding out must consider if their views are reasonable.

He told the jury to carefully re-examine and re-consider all the evidence.

Custer, who said he was working an unrelated undercover surveillance operation in the area at the time, has always maintained that Adams was hostile and aggressive and that he only shot Adams when he feared Adams was reaching for a gun.

The Adams family is asking for between $10 million and $20 million in their lawsuit.